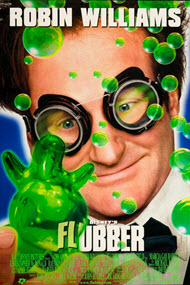 Welcome to the world of Flubber, where Dr. Brainard’s mighty flighty mind creates intelligent robots and flying rubber. Brainard’s awesome scientific faculties come at a price, for Brainard (Robin Williams) is so incredibly absent-minded that while working on his latest invention he inadvertently misses his wedding… again. Sara Jean Reynolds (Marcia Gay Harden), the bride-to-be, left standing at the altar for the third time, leave Brainard and his newly discovered flying rubber, flubber. Can the absent minded professor regain his lost love? Will flubber be a hit? Can our hero save his college from financial collapse? Disney’s answers each of these unrelenting questions in Flubber.

Robin William’s incredible comic talent combined with the superb flubber effects could not save this rehashed remake of “The Absent Minded Professor” (1961). The script is piecemeal, possibly more of an afterthought. It seems as though Disney wanted to incorporate nifty new special effects into the 1961 script so rather than rewrite to add originality, some semblance of continuity, and the mere speck of believability, they just added flying, dancing, cooing green goo to the original film. However, “Flubber” does contain a plethora of cutsey characters, silly antics, and breaking things to delight a very young audience.

“Flubber” contains nudity and some off-color humor that could be considered offensive. However, what offended me most was the extent Disney would twist a plot line to add some offensive content to an otherwise clean film! The aforementioned nudity is a scene in which the bumbling Brainard walks into a life art class and begins teaching physics. The life art subjects? A nude man, a nude woman and a large bowl of fruit. Although the subjects quickly cover themselves (the movie does not contain live nudity), the sketches done by students are in clear camera view. This scene was completely unnecessary to the story and the movie would have been just as amusing if Brainard had walked into a music class or an empty class; however, Disney’s was not going for lively laughs but sexual snickers. Offensive content hidden amidst humor does more damage than just being offended.

If it weren’t for the brief nude sketches, I would have no problem recommending this to very young children. The lack of original or believable story line would pass them by as they delighted in the variety of adorable inventions of Brainard. However, I hesitate to recommend this for the sole reason that mixing sexual content with humor desensitizes people (both children and adults) to the offensive nature of the scene. The poor script and lack of original humor makes this a poor choice for a discerning adults. Pass on “Flubber” and instead rent “The Absent Minded Professor”!

I agree with your review 110 percent. I took my family to the movie over the Thanksgiving holiday and was very disappointed. I would not recommend taking small children for the very same reason mentioned above (the nude scene). It added no value to the movie and made us very uncomfortable for the rest of the movie, we were not sure what other surprises lurked around the corner.

I also agree that there was no good story line; there were some good comedy scenes, but the movie did not flow very well. As an adult, I was bored for the most part. My children (and I) did enjoy some of the comedy scenes, but even they were bored by the story. There was so much potential in this movie, but, in my opinion, Disney failed again. Were they after only the big bucks associated with a holiday release??

My recommendation would be save your money and wait until it comes out on video, if you do that at least you can edit past the objectionable scene mentioned above. The movie should have been called “Flubbed It Again.”

John Thornberry
I totally agree with your opinion of the nudity in the movie. Disappointing, but not surprising coming from Disney. You’re right, it would be a great movie for kids without that scene.

Kevin Caswell
Everyone seems to be asking, “Why did Disney have to put in the nude model scene and the goo coming out of that guys rear end?” The problem starts with the script. I must admit, when I saw that the screenwriter was John Hughes, I was thrilled that he was finally leaving his “Baby’s Day Out” and “Home Alone” days behind. I figured he was finally heading back to the days of “Ferris Beauler’s Day off” and “The Breakfast Club.”

Was I ever dissapointed. I agree with Dave Rettig, “the poor script and lack of original humor makes this a poor choice for a discerning adults.”

Joey R. Parks
I agree with the review. Was I the only one who was also offended by the scene where the flubber goes in the bad guy’s mouth and pops out the back of his pants? I would much rather have my kids see the original version.

D.L.W.
I’ve read the reviews, and I’ve read the comments. I was leery of taking a group of 5th graders to see this because of the dreaded “nude” scene. Even though I knew where the “nude” scene was supposed to be, I could not find it.

Nor did any of the 5th graders I talked to see it. Yes, I knew (from the reviews and comments) that it was not a “live nude” scene, that the nudity appeared on the canvases of the art students, but none of us was able to see it. Maybe it was too fast to see. Whatever the reason, we enjoyed the movie, and I worried for nothing. It’s a good movie. Take the kids. If there’s a “nude” scene, it’s too quick for most people to even notice.

Jerome Bush, age 45
We left the theater saying, why did Disney have to stick in a nude scene in the middle of an otherwise bland movie? The special effects of the flubber were fun, especially the bit with the golf ball and basketball… but the rest was slow and not really interesting. The original is better, though Robin Williams is always fun to watch. My 10 year old had great fun, the older kids were bored.

Stephanie Hanson, a 40 year old mom with four kids
Nudity? Off-color humor? That finalizes my decision: “Flubber” is a no-go for this family. Has Disney lost its creative edge to the point where it must resort to naughty cheap off-color humor to continue to grow its Lion King’s share of the family entertainment market? This certainly refocuses the spotlight on the lack of ennobling values in some of the entertainment fare purveyed by Eisner, Disney and crew as of late [and is particularly hypocritical in light of the “family friendly” pitch constantly bombarding viewers of the Disney Channel on cable television (through advertisements)].

With movie moments like these, one must wonder if the cable TV ads are an honest attempt at promoting family-friendly programming, or just another marketing scheme. As a family, we used to trust that most Disney programming was appropriate for our children, but now find it absolutely necessary to regularly review the prime-time Disney programming slate and “cut out” the offensive/inappropriate programming. What a shame that when it comes to quality family entertainment, “Flubber” and some of the other Disney remakes of late are lackluster at best. Too bad—Walt would be so sad.

John Leonard
Comments from young people
I agree with the review a lot. I went to this movie. Yes, we saw is even though my family is boycotting Disney. If you watch this movie you can see why we chose to boycott it. There were some suggestive parts when that little robot became a “woman”, and the nudity part. Even if Disney makes a kid movie, they still try to put in a little bit of “naughty” stuff here and there… I do not think at all this movie is based for teens.

I’m 13 and I thought that movie was stupid. Although there were a couple parts where I laughed I didn’t find it all that ammusing. Although, my little 7 year old cousin and my sister (who’s 10) thought it was really great. They cracked up at the cute little flubber, and talked about it forever.

I think the movie is geared toward younger children, and long as they know about the human body (so they undertood what was going on in that art class sceen)… they would like it. As for all you parents and the movie… I’m sorry but I guess that’s just part of being a parent :o)

Jillian, age 13
I saw this movie the other day and thought it was alright. THE ABSENT MINDED PROFESSER was much funnier. Although FLUBBER had many funny scenes, it was not as good as people say it is. Dave is right about the nudity. Although it does not show LIVE nudity, you can see it painted on the pictures of the artists. You can see EVERYTHING. There was only a little profanity, and some sexual humor. I wouldn’t recomend this movie to people under 5. And only see it if you are board and feel lile waisting three dollars.