I Know What You Did Last Summer

for strong horror violence and language. 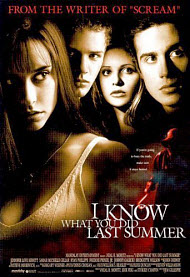 “This secret is about to kill them all!”

This is a flick the kids will bug you to see. It’s “hot” despite no big name stars and has been #1 at the box office for 3 weeks… and deservedly so. In spite of bad taste in portions, for a horror movie this was actually a movie that kept you on the edge of your seat at the same time groaning humourously at the intentional black humor and Hitchcockian scenes.

The plot? Four teen pals are out for one last adolescent fling before college. They party, drink, and drive. In the course of the carousing they hit and kill a man who came out of nowhwere. They decide to dump his corpse into the ocean despite the objections of the only teen with a semblance of a conscience. The catch is …he is not dead, yet they accidentally knock him into the water, where the “rich kid” with no morals is able to save him but lets the man die. They are all changed and grow apart from one another.

ONE YEAR LATER a note is received, “I know what you did last summer” and the murder and mayhem begins. This is way too gory, but the premise is so far fetched that it seems like a scary around-the-campfire story. The action is fast-paced and legitimately suspenseful and unpredictable.

For this genre of film, “I Know What You Did Last Summer” was pretty good. From a Christian point of view, however, there was too much gore, the implication of premarital sex, and some improperly “skimpy” clothing. Excessive profanity abounds, so beware (over 2 dozen “f” words, plus much more offensive language). However, there is no nudity.

Adults who are not grossed out by the gore (which actually is less than some action/adventure movies and less offensive due to the nature of the flick) will find this fun and scary. Teens who do see this should go with a parent due to the above objections. Part of me says “there’s no place for this kind of movie” while the other part says “lighten up, this is a farce that conjures up memories of the stories we all told at sleepovers, camps, etc.”

It’s a tough, very personal decision as a Christian. For a non-Christian, I’m certain thrill-seeking young adults would call this a “must see.”