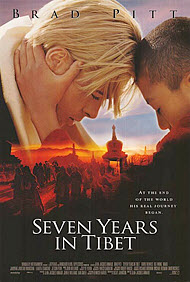 The year is 1939. A gold medal in mountain climbing for your native Austria… a wife expecting your first child… What more could you want? Well, for Heinrich Harrer (Brad Pitt), these milestones in life left him discontent. Instead of staying with his pregnant wife, he leaves the country headed for an expedition to the Himalayan Mountains while his wife is left in the care of a friend. Harrer and Peter Aufschnaiter (David Thewlis) are off to tackle the renowned Nanga Parbat mountain peak.

What started out as a climbing expedition turns into quite an adventure laced with political fervor. Due to the Austrian pairs association with Nazi Germany (Harrer was a member of the party), they become captives of the British prior to the completion of their expedition. Escape eventually ensues, but only after living the life of a prisoner of war based in India. Finally, following a lengthy stay in the wilderness, they make their way to Lhasa in Tibet. This mysterious Tibetan city is foreign to nearly all outsiders, but a gracious citizen eventually takes them in.

Here begins Herrer’s seven year visit in Tibet. After some time, the young Dalai Lama (Jamyang Wangchuk) seeks tutoring from Herrer to answer all sorts of questions, primarily associated with Western life. They become friends and Herrer oversees the building of a movie theatre for the young Dalai Lama. This friendship allows Herrer to think about his son in Austria (he receives news of the birth and a request for divorce from his wife while in POW camp). Without ruining the enjoyment of those who have yet to see “Seven Years…”, I’ll just say that Tibet does suffer some serious political upheaval and the suffering continues to this day.

“Seven Years in Tibet” allows viewers to observe the Buddhist faith, but it is not “preached” or glorified as the “true” religion. Harrer doesn’t portray a religious man, and he is often found relying on his own skill and knowledge in life. While the language was not really offensive, you will be shocked to see what two hungry men will eat! Sex and nudity was absent from this story.

Historically, the writers took a bit of poetic license in portraying the Chinese invasion as happening while Heinrich Harrer was in Tibet. (In actuality, it took place a few years after he left.) The Dalai Lama was also shown to be an outsider of Tibet, observing the Tibetan’s culture and lifestyle as a visitor would see them. Obviously, he was a Tibetan and was not an outsider as was shown.

Incredibly, the filming took place in South America but looked so authentic as to astound even the most observant critics! The supporting cast is commendable and many of the Tibetans are very lovable from young to old. For a glimpse into Eastern Life, a historically motivated script, and breathtaking God-given scenery, spend 2+ hours observing “Seven Years in Tibet”.

One of the best movies I’ve seen in a long, long time. I was impressed by the story and scenery. Highly recommendable to Christian audiences, teens and up.

T.C., age 24
I enjoyed the movie, also. There were good examples of friendship, as shown by Heinrich and his Austrian buddy who suffered through so much and still had each other to count on. Also, Heinrich’s desire for reconciliation with his son, and his friendship with the Dalai Lama, were good models for how men should relate to others and not putting up a macho front.

The Lama turned out to be a human being like anyone else, despite being put on a pedestal by his people—how often do we Christians treat our spiritual leaders this way and not allow them grace to be human? Brad Pitt is a fine actor, and this really showed in “Seven Years” because there wasn’t much profanity, gory violence, or sex (unlike most of his previous movie roles.) And the movie really educated the public about the Tibetan situation without being preachy or trendy.

Amy Mathis
I really like this movie because I love learning about other cultures especially eastern religions. I enjoyed it because it did not “push” Buddism, but I could still learn about it. The scenery was great, and I thought it actually was filmed on location.