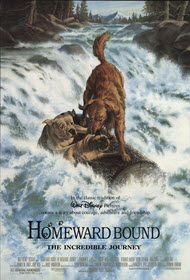 “Homeward Bound” is a humorous and heartwarming movie about acceptance, perseverance, and faithfulness.

When a mother of three remarries, the new step-father’s job forces him to temporarily separate his new stepchildren from their beloved pets. A degree of resentment festers in the mind of the oldest son as a result. That resentment boils to the surface when the pets run away from the family friend who is temporarily caring for them. Unknown to the humans, the unlikely trio of domesticated beasts (a wise old golden retriever, youthful bulldog, and always sarcastic Siamese cat) are struggling against many natural obstacles, including a bear, a waterfall, a mountain lion, porcupine, etc., in an all out attempt to cross the mountain range that separates them from their beloved owners.

While the story is humorous throughout, it includes a hefty dose of sarcasm, plus enough tension that it may be too scary for some preschool-aged children. (If necessary during the part where “Sassy” the cat is swept over a waterfall and assumed drowned, reassure your youngster that she is only hurt and will get better and rejoin her friends soon.)

After effecting the rescue of a lost little girl, Shadow, Chance, and Sassy are taken to an animal shelter, and their owners are called. A happy reunion seems immanent, but is missed when Chance—who was once an inmate of a dog pound—convinces his friends that they are all going to be killed unless they immediately escape.

More challenges face the trio, but they are eventually reunited with their humans in a touching final scene. (If you do view this video, be sure to point out to your children that the sarcasm and crass words are inappropriate.)