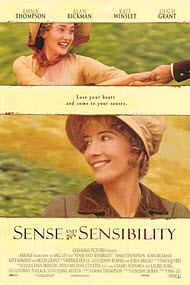 This romantic/comedy, set in the 18th century, begins with the death of Henry Dashwood (Tom Wilkinson), which quickly sets in motion the transfer of ownership, of his estate, from his current wife and daughters to his first wife’s son (James Fleet, “Four Weddings and a Funeral”). Mrs. Dashwood (Gemma Jones), now destitute, finds herself torn from the comfort of her luxurious home to live in a humble cottage, which is generously supplied by a distant relative.

The oldest daughter, Elinor (Emma Thompson), who is the cautious, responsible and realistic child, becomes quite enamored with the bashful and somewhat timid Edward Ferrars (Hugh Grant, “Four Weddings and a Funeral”). Just when it seems he is going to propose, he is abruptly and quite unexpectedly sent off to London leaving Elinor disillusioned and crushed. Meanwhile, Marianne (Kate Winslet, “Kid in King Arthur’s Court” and “Titanic”), the passionate and impulsive second daughter, spurns the advances of Colonel Brandon (Alan Rickman, “Robin Hood: Prince of Thieves”) and falls amorously in love with the dashing John Willoughby (Greg Wise). Once again, when it seems he is about to propose, John is unexpectedly summoned to London.

Elinor and Marianne, when given the opportunity to travel to London, learn the truth about their heartthrobs and are forced to learn how to mix sense with sensibility. The remainder of the movie is their attempts to commingle these two concepts.

“Sense and Sensibility” is full of wit and charm. It is rich in satire; romantic yet filled with disappointments; ingeniously scripted it reveals that the choices we make can determine whether we will face lifelong misery or happiness.

“Sense and Sensibility” is a story that will keep an adult’s interest, but will be boring to the younger generation. If an action packed adventure is your preference, don’t see this one. However, if you want an evening out with your spouse, friend, etc., go see “Sense and Sensibility”. It is clean, romantic and you won’t be ashamed afterwards.