Today’s Prayer Focus
While You Were Sleeping
MPA Rating: 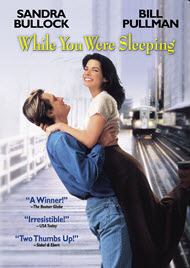 “While You Were Sleeping” is a tender romantic drama whose unusual premise lends naturally to some very humorous sequences! When Lucy—a wholesome clerk at a Chicago train stop—saves the life of a handsome young man whom she has secretly adored from behind the glass of her token booth for several months, she follows his ambulance to the hospital and is assumed by hospital staff and family members to be his fiancée. Because the injured man (Peter) has fallen into a coma, Lucy delays informing his loving but sometimes quirky family that it is all a misunderstanding and that their son doesn’t even know her. The week-long coma allows time for sweet-spirited Lucy to become accepted and even adored by Peter’s family, but the continuation of her well-intentioned untruth creates complications that almost force her to miss out on the most meaningful relationship that she has ever tasted.

This fun “date video” is a great choice for any couple looking for a good drama devoid of bedroom scenes and violence. Unfortunately, …“Sleeping” is marred by about a dozen profanities, a few of which are spoken between family members during a disruptive conversation in the middle of Mass. Our “Content” rating would otherwise have been higher.