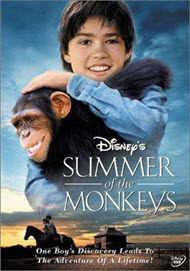 “Summer of the Monkeys” has it all… action, adventure, conflict and humor. It will grab the attention of both children and adults. The story is set in the pioneer days of North America. Beautiful panoramic photography of prairie homesteads, vast skies and stunning sunsets take the audience back to a simpler place in time. But this simple place in time is anything but for one young family.

Meet Jay. He dreams of one day owning a pony. With an unusual occurrence, his dream comes within his reach one day when a passenger train derails, allowing some very talented and valuable circus monkeys their escape. Jay, during a routine walk in the woods, stumbles onto the monkeys whereabouts and discovers that a reward has been offered for their recovery. He then devises a plan to capture the monkeys, collect the reward, and purchase his pony. The only problem is that the monkeys have their own little plan and are much smarter then he expected. With problems surfacing in his plan, Jay enlists the help of someone older and wiser—Grandpa (Wilford Brimley).

Grandpa uses this opportunity to teach the boy some valuable lessons. Lessons unrelated to catching monkeys, but focusing instead on making right decisions in life and putting one’s God-given intelligence to work.

The “Summer of the Monkeys” is one of the most Christ-honoring films I have ever had the pleasure of viewing. The film uses references to scripture and to God. God is sometimes referred to as “The Old Man On The Mountain.” One of the things that I appreciated most about the film is that there is no positive candy coated view of sin. Instead the film shows some of the true consequences of sin verses the rewards of selfless sacrifice and doing the right thing. Lessons important for any age.

Negative—We were very disappointed with the movie, which wasn’t too surprising. It seems to always happen when we love a book and expect the same story from the movie. In the book the brother and sister treat each other with love and kindness. Why do movies always have to have siblings being mean to each other? I recommend you just skip the movie and read aloud the book to the whole family.
My Ratings: [3/3]

Susan Sackrison, age 42
Negative—…‘The Summer of the Monkeys’ movie is bad! It starts out trying to make you feel bad because a kid is being beaten up by a bigger kid. Did anyone notice that he stole from that kid ‘for fun’? He is totally disobedient, and a habitual liar that no one believes. “But the fearful, and unbelieving, and the abominable, and murderers, and whoremongers, and sorcerers, and idolaters, and all liars, shall have their part in the lake which burneth with fire and brimstone” Revelation 21:8 (KJV)

The monkeys destroy their home, and, in the next scene, it’s all better. The kid runs away from home, is never going back again, but is on the steps listening to the grandpa and mom as soon as the grandpa gets there. The house, barn, and crops are destroyed by a tornado, but instead of helping his parents, he is the hero because he wants to pay for a surgery for his sister. But the barn and house are all better again, and I guess she’ll get her surgery, but what will they eat until next years crops come in.

And then, instead of helping his parents get back on their feet, at the age of 15, he leaves to go see the world.