What are the odds surrounding Jesus Christ? Who was this child really?

Recently I purchased a book entitled What the Odds Are. It's an A-Z collection of the odds on "everything you ever hoped or feared could happen".

For instance, did you know that the odds of your being injured by a lightning strike on any given day are only 1 in 250 million, but over the average lifetime are 1 in 9,100? In contrast, the odds that the average citizen of Washington, D.C. will get "plugged, stabbed, poisoned, or bludgeoned to death" in the course of a year are only 1 in 1,681! 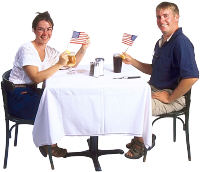 One in 10 Americans read the Bible daily. One in two eat out somewhere every single day of the week--1 in 20 at McDonald's. In Sweden, 40 of every one hundred persons are senior citizens; in Fiji, only 1 in 50. And here's one that really amazed me: 1 in every 24 Americans has membership in the National Geographic Society. I guess it figures, though, because I noticed recently that a staggering 9,975,558 average copies of the National Geographic magazine are printed by the Society every month (including those intended for international distribution).

If you still happen to be unconvinced that the baby born in Bethlehem 2000 years ago was anything more than just an ordinary human baby, let me challenge you with a few of “the odds” in that regard.

One March several years ago I received a paper from United States Senate Chaplain Richard Halverson. In it he wrote:

“The fact is, the birth, crucifixion, and bodily resurrection of Jesus Christ are celebrated worldwide by folk of every race, language, and color, every year. And believing in Jesus, they have been delivered from the most evil, disastrous, frustrating, debilitating habits and life forms possible. The real problem with Jesus Christ is not that folk can't believe in Him—but that they won't believe in Him.”

My friend, in all honesty, what are the chances you've not been altogether objective about the nature of the baby born in Bethlehem? What if the baby was God? What if He is God? What if you are to submit your life to Him?

References: Les Krantz, What the Odds Are (HarperPerennial, 1992).