Are we made of stardust? 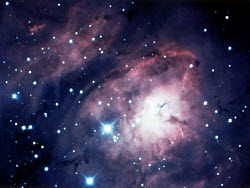 Adam was created before the stars, not after.

This is the rather simplistic conclusion of the big bang theory, whereby the original chemical elements of the early universe are thought to be limited to hydrogen, helium, and lithium. According to this secular view, all the other elements, now numbering 111, were later formed by nuclear reactions within the cores of ancient stars. When these stars eventually exploded as supernovae, their many elements were spread far and wide throughout space.

The solar system, including the life upon planet Earth, is thought to be made of this star debris. Thus has arisen the poetic generalization that we are all “made of stardust” or star debris and are therefore “one with the universe.” This false idea fits in well with the New Age movement, which sees mystical connections between humanity and nature.

Man—in the form of Adam—was indeed made from the “dust” of the ground. However, the Earth and its component materials were created before the stars, not from the stars (Genesis 1:16) —see Genesis 1.