for intense violence and disturbing images

It is not often that one feels the urge to applaud the ending of a movie; even rarer to have the entire audience applaud. “Frequency”, Dennis Quaid’s murder mystery about time-bending, is also a cop movie, a movie about family values, and plain old-fashioned entertainment. Those of us who like television programs such as “Seven Days” and “Quantum Leap” or movies like “TimeCop”, know that the time-genre comes down to the simple question of “what if”? 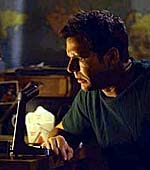 Two stories unfold when the film begins. In the “past”, the Amazing Mets summer of 1969, Frank Sullivan (Dennis Quaid), NYC firefighter is courageously facing a blast. In the present, some 30 years later on the upcoming anniversary of his father’s death, Frank’s son, John (James Caviezel) is leading a troubled grief-stricken life of wouldas, shouldas, couldas. His girlfriend has left him because John’s life is plagued by the question: what if his father had not died way back when? In time, John gets a chance to fix things. (Sun spots, the aurora borealis, and a HAM radio). But in sparing his father’s life, he has inaverdently caused the deaths of seven people—including his mother. It is then up to John and Frank, working together, to not only repair the past, but if possible to make it better.

The movie takes turns exploring the effect of the loss of a father and mother. Mothers and fathers affect sons differently. In the beginning, John’s loss of his father makes him somewhat inneffectual and withdrawn with his loving relationships, though he is loved by his colleagues and friends. When situations are reversed and he loses his mother, he is a useless cop who is a disgrace to the force and unworthy of respect. The audience for this kind of film knows all too well that even the smallest change in the past can produce unforeseen and unwanted life-changing consequences which can be potentially Earth-shattering to our lives and the lives of those we know nothing of. The movie shows us that the worth of each of our deeds can never be fully understood. As John Donne wrote, “no man is an island; everyone is part of the maine.” In short, someone else’s life or death is often (in some way or other) responsible for someone else’s life or death.

The greatest thing about this movie is that it preaches family values without being preachy. We see the effect of a broken family. As Christians, we know that there is just so much we can do to repair the past. When Adam and Eve ate of the forbidden fruit, God “repaired” their mistake by giving them what Milton calls, “a happy guilt.” Their sin caused them to know God’s loving heart because God sent his son to redeem them in their sin. Because of a grievious sin, they were graciously made into adopted sons of God, co-hiers with Jesus Christ. It would be good to think that great errors can lead to great gifts. I have no doubt that some great mistakes lead to wonderful “repairs.” However, for the most part, the past cannot be repaired. And the grief brought on by death and broken families often can only be truly healed by God’s kindness. Still, I like this little fantasy. And the entire audience did as well. Death was not only conquered on the cross 2000 years ago, but once again in the lives of the Sullivans.

This was a father’s dream. A father was actually important in this movie beyond causing extreme difficulties for his family. I thought this movie was actually more believable then “Mission: Impossible 2”. I would highly recommend this movie to any, even those with problems with profanity. As an ex-fireman, I know how clean the language is. My Ratings: [3½/5]

James Boes, age 47
This was the best film I have had the pleasure of watching in years. It was not represented well in the previews and I kinda wrote it off as a video rental possibility—what a big mistake that would have been. I could not believe how well written and acted “Frequency” was. Yeah, you do have to let your imagination run to believe the story line, but don’t you remember sitting under a tree looking up in the clouds and seeing fire engines, elephants. Go see this movie and leave in awe, while the entire movie theatre erupts at the end. Critics maybe your too critical to reconize a ultra special film. My Ratings: [4/5]

Renee Bridges, age 29
This movie was a little slow going, but a good story. I didn’t like the cussing. I noticed about 5 cuss words or phrases and for a movie with cops and firemen I think that might be a record. Fair warning: one of the “phrases” chosen uses God’s name in vain. Had I known that before I doubt I would have bought the ticket. It wasn’t real obvious due to the background action scene that surrounds it. Simply that almost caused me to walk out. It was interesting enough and a good enough story that you will want to see how it ends. BTW I did like the ending :) My Ratings: [3½/3½]

Michele Brady, age 25
I’m a dad and this was a great “Dad Movie” with plenty of messages of how important we (Mom and Dad) are to our children. In the beginning of the movie the grown son was so messed up, but by the end you can see how God intended things to be when children have a loving Mom and Dad. There is a scene when the 1969 father is talking to the grown up 2000 son about how they feel about each other. When the father tells his son he loves him, you can’t not get touched when you sense the healing in the heart of this son who grew up without his dad, but with movie magic gets another shot to know him and learn from him. My tears came when the son says back to his dad, “I love you too dad.” My dad died when I was 7 and I so wished I could talk to him, just once more. Go see it and if your dad is still with you, take him too and you can cry together. My Ratings: [5/5]

Gary Gunn, age 50
It was a better movie than what I expected there was not a lot of cursing I counted about 9. As a Christian, I recommend that you see it. There is no nudity, but just a moderate amount of violence that is why it’s PG-13. My Ratings: [3½/3]

Donnie McKinney, age 53
This movie was so much more than I thought it would be. I heard it was a “MAN” movie. Not so! This movie is sensitive to the feelings of everybody in the film. And what I liked the absolute most about the film is that when something was changed in the past, it affected everybody in the future. Not just some people. And that was constant. Great acting! I love Dennis Quaid. He’s one of the most under-rated actors of today. And James Caviezel or whatever was also magnificent! This was a great movie all around. My Ratings: [4/4]

Jason Eaken, age 16
Oh yes. Go see this one. “Frequency” has to be one of the best movies I have seen in a long time. It kept you on the edge of your seat, literally (small seats in that theater). It’s one of those movies where at certain points the entire audience cheers or claps. I heartily recommend this to anyone, but you might want to think twice about letting little kids see it. There is at least one scene of graphic violence and several photographs from murder scenes. On the whole, however, it is a triumph over mundane movies. My Ratings: [4½/5]

Will Hose, age 21
“Frequency” was by far one of the best movies I’ve ever had the privilege to see. It’s very rare that I can go into see a movie that I don’t leave feeling like I’ve been assaulted by language, sex and violence far beyond what was needed to portray the storyline. “Frequency” made me laugh, cry and it literally kept me on the edge of my seat wondering what was going to happen next. In the theater that I was in, the people applauded and cheered when the movie finished. How often do we see a movie that get’s that great of a response? My Ratings: [3½/5]

Anastasia, age 17
Best movie in the last year! It is a thinking man’s movie with action, suspence and a great plot. My Ratings: [4/4½]

Josh Tucker, age 19
Ok the premise is a little out there… But think of it as a miracle (which I think the characters call it in the movie). The characters and acting are impressive enough that you can suspend your disbelief. The films’ strong points are in its depiction of the family and how important a father is. I can’t remember a lot of talk about God, but the film focuses on the importance of love, sacrifice and family. This movie caught my attention the first time I saw the poster to the last minute of the film. It is smart enough to make you think, enough action and suspense to put you on the edge of your seat and enough feeling to make you want to call you dad. All around good movie. My Ratings: [4/4]

Dan, age 16
Movie Critics
…The filmmakers use the notion of time warps in amusing and novel ways. …

Jamey Hughton, Movie Views
…one of the truly more interesting, entertaining and enjoyable supernatural films that I’ve seen in a long time. …solid cast with heartwarming portrayals. …isn’t spooky or connected to anything occultish…

Holly McClure, Crosswalk
…Every now and then (but not often enough) a movie comes out of left field, no hype, no hysteria, and knocks one out of the ballpark: smart, suspenseful, satisfyingly unpredictable. …Cool.

Steven Rea, The Inquirer, Pittsburgh
…Oh, let’s be blunt: The movie’s whole concept is ludicrous, hard to accept even on its own contrived terms. But if you are willing to suspend disbelief, the film is enjoyable…

Andy Seiler, USA Today
…For a sizable population of men yearning to get on the same wavelength as their aging dads, ‘Frequency’ may be the first time-travel fantasy to move grown fellows with 401(k) accounts to tears…

Lisa Schwarzbaum, Entertainment Weekly
…Until it completely self-destructs in the last 30 minutes, the picture is a clutcher in terms of both emotion and excitement…

Rob Blackwelder, Spliced Online
…several violent, but not explicitly bloody or gory murders… Profanity consists of at least 7 ‘s’ words, while other profanities and colorful phrases are also uttered…