for sensuality and some language 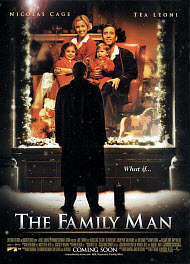 Nicolas Cage and Téa Leoni star in the latest holiday drama that provides a variation on the “It’s a Wonderful Life” theme—what would my life have been like if I had taken the “road less traveled?” Cage plays Jack Campbell, a successful, ruthless, driven Wall Street executive who receives a strange and wonderful gift, a glimpse at what his life could have been had he chosen to stay with his then-girlfriend Kate, rather than pursue an overseas business internship that ultimately doomed their relationship.

Jack is whisked away to a life he knows nothing of by a mysterious stranger. Waking up in the average suburban life, Jack finds himself with a wife (Kate), two kids, a dog and a mortgage. The usual fish out of water jokes are played for some laughs, especially Jack’s disgust at suddenly being denied all the “finer things” in life that he is accustomed to. But, along the way, he realizes that he could have a beautiful woman, wonderful children and a life that, while at times monotonous, is wonderful in its fill of simple joys and love. In the end, Jack realizes how much he loves this new life, yet must let this “unreal” life go. I won’t spoil the ending, but Jack, as you may guess, tries to put things to right in his “real” life upon his return.

This film, overall, had a good moral worldview, namely that one can have all this world can offer and still be missing out on the best things in life. Love, integrity and faithfulness are held in high regard. However, this film, unfortunately, doles out some very unnecessary content. There is a little profanity, some in front of children, nudity and sexual talk (though at least mostly between a husband and wife) and Jack’s “angel” pulls a gun on him in a scary holdup scene. Still, I recommend this film overall, just leave all but the oldest children at home.

This is a WONDERFUL movie that shows the contrast between what the world has to offer and what God has to offer. Although God isn’t mentioned as the author (too bad, they missed an opportunity), the character Jack makes a great transition in his values, and discovers what’s REALLY important. I think this is a great movie to see with your wife. Also, Nicolas Cage and Téa Leoni’s acting was exceptional. I thought it was interesting that when Jack was following Satan’s plan, he had all the answers and never had doubts, but when he was humbling himself to love others, then he had struggles. This is real life, I think. Jesus tells us to serve others for OUR benefit. Jack learns this in this movie. See it! My Ratings: [Better than Average / 4½]

David Katz, age 42
I think this movie was pretty good. It wasn’t excellent or dirt poor—just in-between. I personally didn’t notice a bad language, which I found to be good. And though this film DOES have some “sexual scenes” all that you see is kissing. And there IS a scene where he walks in on his wife in the shower and that shows her through the shower door, but I think that overall, it promoted good morals: he didn’t have the affair, his friend gave him good advice, he and his wife had a good relationship, etc. This certainly isn’t a family film, but I think that the rating of PG-13 is appropriate.

Adrienne, age 16
This movie was adorable! There were a couple parts, but all in all a great movie. …There was only one thing that could be taken as nudity in the whole movie. I totally disagree with the lady who said it was full of nudity. She is shown once dancing while in the shower. While I thought it was unnecessary, it wasn’t a sexual provocative type nudity and all of it was shown distorted through a shower door. I think this movie was great for people of all ages, over 13. This is the first movie I’ve seen in a long time that earned a PG-13 rating, because that is the exact age I think that should see it and no younger. While the movie was absolutely touching and adorable, the ending is kind of disappointing, because it’s not as happily ever after as you would have hoped, but still cute. My Ratings: [Better than Average / 4]

Vanesa, age 16
As highschool/college sweethearts, my wife and I thoroughly enjoyed this film and the strong positive statement it makes about sacrificial love, commitment and marriage. My criticism would be that faith is not discussed, and God is only mentioned in vain. In addition, the scenes and words that gave this a PG-13 versus PG rating were totally unnecessary and obviously intentional on the part of the producers. It’s a shame that a movie called “The Family Man”, was not made for all the family to see. My Ratings: [Better than Average / 4]

Jim, age 40
I had hoped to see a decent movie with my children age 11 and 13. I checked the movie ratings offered at the theater desk, and it said PG-13 (language and adult situations). When the nude shower scene presented itself, I was surprised. I went back out to re-read the ratings, thinking perhaps I missed something. When I asked the manager why nudity wasn’t listed, she said that would be an adult situation. I responded, no that would be nudity. The film had so many loose ends it drove me crazy! What’s the point of the angel again? It seems like the writer tried to combine Dickens “A Christmas Carol” with “It’s a Wonderful Life” and made sense of neither. My children did not like the movie and thought I made a mistake bringing them. Yes, kids, you are right again. I came home immediately and began looking for a Christian review site (we just got the Internet at Christmas!). I will not rely on the ratings at the theater again. Thank all of you for your help! My Ratings: [Extremely Offensive / 2]

Cindy, age 49
Depressing. If you feel like being let down at the movies, see this one. The acting is superb, the script they had to work with though, is, simply, DEPRESSING! This is not “It’s a Wonderful Life” of 2000. It’s more of an everything happens you didn’t want to, and it all happens to nice people movie. My Ratings: [Average / 1½]

Anon, age Adult
“The Family Man” was a pretty good movie. I’d say it was a heart warming movie, how it portrayed the changing of a heart made of steel to a soft spongy one. That was a very nice screenplay and script. There was a few things that I objected to which was twice or thrice, the Lord’s name was taken in vain. Scattered scenes of alcohol consumption as if it were water. This movie has a lot of sensuality and 1 brief scene of nudity. I really liked this movie aside from the fact of the objectional words and scenes. In a nutshell, go check it out see how you like it. My Ratings: [Better than Average / 4½]

Sinan Logan, age 18
…a cute movie. …The movie did make a nice point that success and money cannot take the place of love and commitment of a family. There was profanity and 1 “f” word, which shocked me when I heard it. “Let no corrupt communication proceed out of your mouth, except that which is edifying, that it may minister grace to the hearer.” One lady, looking nasty at him all the time, wanting to have an affair was irritating, but he chose not to, so that was good. Of course, her personality reminded you of Proverbs 5, 6, and 7, even though she was not a harlot, she was definitely loose, and looking for anyone. Actually when you read Proverbs 7, the woman is married, her husband is out of town, etc. So she does fit this example of a harlot. His wife was extremely sexual, which in a private life is fine, but I thought we could have been just as well not watching her come on to him in the bed and I thought they showed way too much skin in the shower. The children were precious, and all in all, it was an okay movie, kind of silly and it did not remind me of “A Wonderful Life”, with Jimmy Stewart, which a lot of people were telling me. I don’t think there was an angel anywhere in this film… Taking into account what I have said, the best message in this film is to love your family and not money and possessions and the struggle one goes through to see the truth about this subject. My Ratings: [Average / 3½]

Donna Moynahan, age 45
I want to warn parents about this movie, their are several nude scenes. There are several sexual references that are not good for teens or dates. It could have been a good film, plot was good, ending poor. The content was inappropriate except for married couples. He walks around in bikini underwear and there is an explicit nude shower scene. A little boy is urinating and you see all of his anatomy. Not for kids or teens! My Ratings: [Extremely Offensive / 2]

Trisha, age 35
While this film has its faults, all and all it’s a good movie. I liked who the guy Nick Cage played had a change of heart and saw how empty his life was. It’s a touching film, while not perfect it’s one of the best movies out there right now. I liked it a lot, you probably will as well. My Ratings: [Average / 4]

William Frisbee, age 37
This movie was enjoyable. There were only a few objectionable words. It is a lot better than most movies in that respect. My Ratings: [Better than Average / 4]

Bill Muller, Arizona Republic
…Marital commitment is even upheld as Jack turns down a neighbor’s offer of adultery…