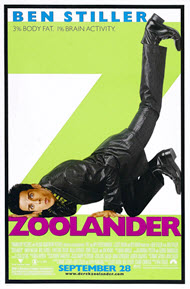 Ben Stiller (“There’s Something About Mary,” “Meet the Parents”) wants to do it all. he’s the co-writer, director and star of the comedy “Zoolander”. Even parents Anne Meara (“Judy Berlin”) and Jerry Stiller (“Seinfeld”) are in the film—after all, he is in charge! And let us not forget Ben’s wife, Christine Taylor, and his sister Amy. Stiller, from Manhattan, was raised on comedy. His parents had their own comedy act and performed in nightclubs and on television. Ben, at age 35, is one of the more popular actors among GenXers. He is now taking a satirical character that he created for the 1996 VH-1 Fashion Awards to the big screen.

I guess if Woody Allen can have the vanity to cast himself as a babe-magnet, Stiller can try and do the same as a male super model. We, the audience, are supposed to believe that this flic will be one of those hip bubblegum-colored parodies. Instead, it is a sad commentary on how tainted the medicine for laughter has become.

A film about an assassination plot in these troubled times may be considered insensitive. And you would have thought Ben could have at least used a fictitious country instead of the mostly Muslim Malaysia. But he didn’t. I’m not even sure how you can build a comedy around the plight of child labor violations in the world. But then again, this is humor after all, built around clueless models.

Derek Zoolander (Ben Stiller) is the top male model in the world. He has the ability to stun everyone with his gaze (they even have different names). A tragic accident takes the lives of his roommates (proving to everyone at home—don’t soak your friends with gasoline and then play with fire). He then loses the Top Model of the Year Award (which he had won 3 years in a row) to archrival Hansel (Owen Wilson). Then a hard nosed reporter named Matilda (Christine Taylor) does further damage to his reputation by lambasting him in a “Time” Magazine cover story (how low can you go?). Derek is completely distraught and heads home to the coal mines of New Jersey. He joins the work in the pits with his father (Jon Voight) and naturally his brothers possessing dim outlooks. And dear old dad isn’t exactly thrilled or accepting of his son.

But have no fear. Fashion designer Jacobim Mugatu (Will Ferrell) would be happy to bail out Zoolander. He plans to put Derek back on top, but he secretly wants to brainwash him to be an assassin. You see, he just can’t stand the thought of little children making minimum wage in a foreign nation.

Most of the movie is one dumb joke after another. Ben calls on several “SNL” friends to help rescue this comedy. He even has a couple of dozen cameos (how many favors can one guy call in?). None of this can stop this comedy from being one of the most offensive I have ever seen. Just when you think that PG-13 comedies have sunk to an all time low, yet another comes along to dive even deeper.

“Zoolander” was originally rated “R”, but with some slick editing managed to pull out a PG-13 rating. My strong recommendation is to skip this one. Not even brainwashing me could change my view. Definitely an “Adult” film in every sense of the worl.

Alternates: If you just gotta have something funny to pass the time, I recommend the offbeat “Just Visiting” and “The Dish.” Unlike “Zoolander,” both of those are more worth your viewing time.

Positive—Well, I think I saw a movie different to everyone else’s review. The Zoolander I saw, in my opinion was hilarious. It was very much my sense of humour. In some parts, I laughed so hard that I cried, and it hurt. Sure, there was two little bits that weren’t the best, but weigh the good with the bad. How many movies do you see nowadays that don’t have something like that? Why not look at the good side, he still fought evil… got the girl… saved the day… what more does it need? Even as a christian, I’m sure there could be a lot more who could look at the lighter side of things and have a good time. I recommend this movie to anyone who likes a good laugh…
My Ratings: [Better than Average / 3½]

Jamie C., age 17
Positive—Unlike most people who’ve commented on this movie, I loved it. If you attack it for poor timing, fine, but don’t let that deter you from this hilarious work. I’ll admit, I worried that this would be a repeat of “About Mary”, but I was pleasantly surprised. Ben Stiller plays a goofy character that you actually feel sorry for by the end. Minus a few pointless sexual sins (this WAS written by Ben Stiller), the comedy is clean and entertaining. Owen Wilson, who is not only an entertaining actor but amazing writer (See “Rushmore”, “Bottle Rocket”, and the “Royal Tannenbaums”), got the aloof, Freak Streat visiting Hansel down perfectly! The comedy’s stupid. This movie has no dramatic value. BUT… it’s one of the funniest films I’ve seen in a long, long time!
My Ratings: [Positive / 3½]

Liz, age 18
Negative—Zoolander was a absolutely horrible movie! This is the only movie I have ever walked out on! don’t go see it, don’t rent it… Not worth it at all.
My Ratings: [Very Offensive / 2]

Kaley, age 15
Negative—This movie was a complete waste of money and time. Terrible movie… very offensive. I left the theater during half of the movie… this movie really is bad. don’t go see it.
My Ratings: [Extremely Offensive / 1]

David, age 18
Negative—This movie was just sick. I thought it was going to be funny. It was neither funny nor pure. It seemed every other scene was something disgusting. In the bible it says in Ephesians 5 that there should not be “Even a hint of sexually immorality…”. This movie went beyond that. Do not recommend this movie to anyone!
My Ratings: [Extremely Offensive / 1]

James Bonner, age 23
Negative—I am really surprised at the viewers comments and felt I needed to add a strong warning to parents and Christians. This film is highly immoral and offensive. The “kissing scene” one viewer refers to was an implied scene of three people having sex together. Did they show body parts? No. Did they show the sex act? No. Did they imply that group sex is cool? Yes! Is this a message we want our children to have? Is it something any Christian wants to be subjected to? I’m not sure why this wasn’t revealed in the original review—go ahead and say it all. I’d rather be talked to “straight and real” than caught off guard in the theater—and have to get up and leave, which we did.
My Ratings: [Extremely Offensive / 1]

K Muse, age 36
Geez, you have to wonder if this reviewer saw the same movie I did. While this movie relies on dumb comedy to get its laughs, it does get some laughs without being nearly as offensive as most Hollywood movies. The two scenes the reviewer mentions as offensive are easily the two most offensive in the movie, and to imply that they are merely the beginning of an extremely offensive movie is completely irresponsible and dishonest. This movie has its moments that will make discerning moviegoers think twice about and you should prevent your kids from going, but this is run of the mill fluff from Hollywood and will make you laugh, even if you’re just laughing at how ridiculous this movie is trying to be. I can understand someone not liking this sort of comedy but I don’t understand how any reasonable person could think that its so terribly offensive in comparison to other PG-13 movies. it’s not.
My Ratings: [Average / 3½]

Joe, age 29
Okay this movie wasn’t as bad as you all have made it out to be. There was some cursing but very little and the sexual content is more of a leave it to your imagination kind of thing which they make fun of, yes this movie was dumb BUT NOT BAD! …I agree they could have left out the kissing scene which is all it is. …it really could have been better but the movie was really funny.
My Ratings: [Better than Average / 3½]

Matt, age 21
Negative—Who cares if Stiller wants to include his family in his movie? Who cares if he wants to include cameos of celebrity friends? This genre is only enhanced with that sort of thing. But what this film amounts to is a bunch of adolescents trying really hard to make a comedy. And it could have been too, but the vulgar tint to the base of nearly every joke and the almost too serious plot combine to form one big dud. It was just plain stupid. And not funny. As far as taking out the World Trade Towers, I’m not so sure it is a service to those who died by completely wiping it off the face of the Earth. It was a part of New York sky line when the movie was made. I think it should remain part of every movie that it is already in. We can’t pretend it was never there. Sure, Spider Man and other movies coming along next year should take the Towers out, and Hollywood seriously needs to look at their idea of entertainment as far as the action flick is concerned. But just because the Towers are in a panning of the New York sky line of films made prior to Sept. 11th doesn’t mean someone is disrespecting what happened. Point is, Zoolander is a bad film. don’t waste your time!
My Ratings: [Very Offensive / 3]

Lori, age 27
Negative—You don’t know how much I wish I would have visited your Web site before I saw this movie. Ugh! It was disgusting! A complete waste of time and money! The movie contained much sexual deviancy and references to drugs and drug usage was often. More of Hollywood trying to sell itself as the norm. Do not see this movie. Do not rent it when it comes out on video. I just want to erase it from my mind completely. Yuck!!!
My Ratings: [Very Offensive / 1]