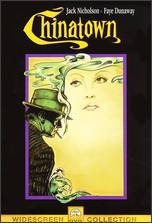 Directed by Roman Polanski, “Chinatown” is a film noir classic. It features all the components of a great movie: interesting characters portrayed by great actors, airtight directing, and a script that many film buffs consider to be the ideal screenplay.

The plot is so complex that I can’t even begin to touch on it. It begins with the death of an important citizen of 1930’s L.A. The man’s wife turns to a private investigator to help solve the murder. The further into the case he goes, the more endangered his life becomes. Soon, he is faced with numerous facts: who the murderer was; what the motive was; and that, sometimes, whether right or wrong, there’s nothing you can do about a situation.

The acting in this picture is amazing. Jack Nicholson plays Jake Gittes, a private detective with a past that he’d prefer to forget. Nicholson portrays Gittes with a cynicism and wisdom paralleled only by Bogart himself. Playing his primary romantic interest is Faye Dunaway, who comes on like a modern Barbara Stanwyck. She, too, has a past filled with secrets and will do anything to keep them from coming out. Topping off the cast is John Huston, the legendary director of earlier film noir movies such as The Maltese Falcon. Huston plays a powerful and respected resident of L.A. who is probably the shadiest character of the lot. Huston shows that he is a great actor as well as a great director.

There is very little offensive material contained in the movie; brief amounts of nudity and very little profanity. If released today, it would easily be a PG-13.

“Chinatown” is one of the best movies out there. It teaches, much like Casablanca, that, sometimes, no matter how hard you try, a happy ending is almost impossible.

Positive
Positive—“Chinatown” truly is a masterpiece of cinema! The characters in the film are carefully created by some of the best actors in the history of movies. Jack Nicholson and Faye Dunaway are absolutely fantastic! I love the way the movie deals with its characters secrets. Everyone in the film has them, something from the past that they cannot escape or cannot come to terms with. It is this bond that unites the two main characters. They hope that, if they have someone they can turn to, everything will be okay. To me, that demonstrates a very Christian idea.

Obviously, this is a very heavy film. However, it is also a very funny and very clever film. That’s what is so great about Nicholson’s performance. As per it being PG-13, I would agree that this is not a movie for children. But I would also contest that neither are “A Civil Action” or even the recent “Minority Report”; both rated PG-13.

I will say this: “Chinatown” has great acting, direction, cinematography, and writing. It is an enormously engrossing [story].
My Ratings: [Better than Average / 5]

Jason Eaken, age 18
Positive—Wow. What an amazing movie. From the brilliant plot to the fantastic music, this indeed remains one of the best. The violence is not very intense, and there’s not much of it. Same with language. Sadly, there’s a scene of obvious innuendo with a tiny bit of nudity. I don’t hesitate to recommend this film. Jack Nicholson makes a fantastic detective, and the objectionable content is so low compared to the thought-provoking and unforgettable impression it leaves. This should be as famous and popular as “Sherlock Holmes”!
My Ratings: Moral rating: Average / Moviemaking quality: 4½

Gabriel Mohler, age 25 (USA)
Negative
Negative—To me, the movie was not all that great, but I’ve never been a fan of Jack Nicholson or Faye Dunaway. The incestuous relationship (revealed at the end) is something children don’t need to deal with, and there is some graphic violence in this movie, especially the scene where Nicholson’s character gets his nose cut.

By “today’s standards” Chinatown would not receive the R rating it was given, but its society’s “standards”, not God’s, that have changed.
My Ratings: [Average / 2½]