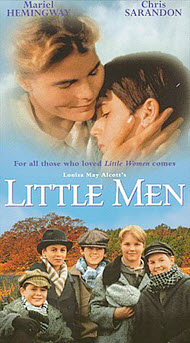 Since the oft-filmed “Little Women” was well-received when remade in 1994, and since “Little Men” had last been filmed in 1935 and 1940, someone eventually connected the dots and backed this remake. I can’t say how this version compares to others, since I’ve never seen any others nor read the novel; but it’s a very good family film in and of itself.

Boston street orphan Nat Blake (Michael Caloz) is caught in thievery and referred to the Plumfield School for Boys, run by Fritz and Jo Bhaer (Chris Sarandon, Mariel Hemingway). Yes, she’s the adult version of Jo from “Little Women”. The Bhaers have a rare gift for working with troubled youth. But when Nat’s hardened friend Dan (Ben Cook) also shows up at the home and begins to disrupt the routine, Fritz and Jo’s endurance is severely tested. Every story is based on conflict. Good stories, such as this one, resolve the conflict in ways that encourage us or teach us something.

The production values are high, cinematography is very good, special effects are convincing, and the acting is fine all around.

Content Warnings: One use of d* and a few profanity substitutes. The preteen boys are occasionally shown smoking, drinking, gambling, stealing, lying, fistfighting and playing dangerous “dare” games; but all of this is portrayed negatively. There’s one on-screen death (non-violent).

The ending is not only satisfying but is mutedly evangelical, as one of the formerly “tough” characters breaks into a chorus of “Amazing Grace.” This film is worth your and your family’s time.

Positive—This is a great movie. My family has watched it together and we all enjoyed it. It’s a clean family movie with lots of lessons. It also keeps your interest. Definitely a must see, don’t miss it.
My Ratings: [Good / 4½]