for sexuality, violence and language 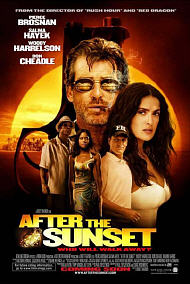 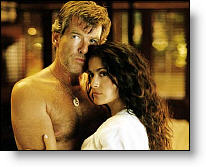 “Who will walk away?”

Think of the last few heist movies you have seen. Don’t they usually end with the thieves escaping to a tropical island, sipping margaritas as the sun sets? That is about where this movie begins. We see master thief Max Burdett (Pierce Brosnan—“Die Another Day”) and his sidekick and fiancé Lola (Selma Hayek—“Frida”) performing a high tech heist of the second of three Napoleon diamonds protected in part by FBI agent Stan Lloyd (Woody Harrelson). We next catch up with the pair settling into a life on an island paradise. Roll credits. Wait, not quite, this story is just beginning.

FBI agent Stan, who is seen as something of a joke now because of his failure to catch Max and Lola, pays a surprise visit to their beachfront home. Stan tells Max that he believes the only reason they are on this island is to steal the third Napoleon diamond from a display on a cruise ship docked in the local port. Max denies the allegation, but Lola, who really wants the duo to be permanently retired, worries that Max will want to do the job after all. Stan vows to keep and eye on them and maybe even catch them in the act. He employs the help of local cop Sophie (Naomie Harris—“28 Days Later”) to make sure Max and Lola aren’t up to any funny business.

When the local Kingpin (Don Cheadle) enters the scene to ask Max to steal the diamond, we begin to wonder who is really in on the proposed theft and who isn’t.

The basic plot is fairly simplistic and sometimes unrealistic, but the movie does provide some entertainment. However, it falls far short of other much better pictures within this basic genre (see Heat, “The Score,” “Ocean’s 11).

Selma Hayek seems to exist as more eye candy than character, parading about in one skimpy, revealing outfit after another. Brosnan is Brosnan. Studly and full of chest hair. Harrelson overacts as usual, and the subplot of him and the local cop seems out of place and pointless. Don Cheadle, who has been underrated in his other appearances, is here underutilized, and his talent basically wasted. None of the characters seem fully developed.

A dozen or so offense words are used some 20 times, and the Lord’s name is taken in vain on 5 occasions. There are sexual scenes and innuendo as well as brief nudity. True to genre, the criminals are generally the rooting interest. I think this time around I was rooting for a better script.

After the sun sets, it’s dim. “After the Sunset” isn’t much brighter. It feels like a summer movie one might see when the other blockbusters are sold out. Enjoying a real sunset is probably a better option.

Positive—I thought this movie was great, but I do wish the sensuality was cut down. For older teens, I think it is acceptable, but definitely not a show for the younger ones.
My Ratings: [Good/4]

Allana McBride, age 24
Movie Critics
…so stale it feels like a retread of a retread…

Stephen Holden, New York Times
…The sun sets on this film long before it’s over…

Kirk Honeycutt, The Hollywood Reporter
…sizzles for a half-hour, then fizzles as we realize that not much is at stake.

Bob Townsend, Atlanta Journal-Constitution
…skillfully made, but it’s not necessary. I can think of no compelling reason to see…