MPAA Rating: NC-17 for a scene of explicit sexual content 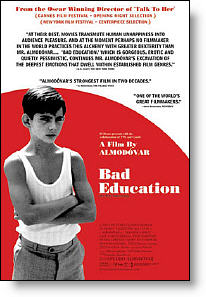 Article on sexual abuse of children

Special note: This rating means no one under 17 can be admitted, but that the film does not contain outright pornography, as defined by the MPAA. The distributor (Sony) had hoped for an R-rating, but was denied it by the MPAA, despite an appeal. We do not normally review NC-17 films, however, the reviewer Dr. O’Neill (M.D.) wished to do so, and the rating was unknown when the arrangements were made. Neither Christian Spotight nor the reviewer recommend this film. It was found to include sex scenes between men. There is also a scene that suggests a priest sexually abuses a boy.

Pedro Almodovar’s “Bad Education” begins with a title sequence reminiscent of the title sequence of Alfred Hitchcock’s 1960 film, “Psycho.” But it’s there that the similarities between the two films end. Despite the vibrant comic-book colors (cherry red Venetian blinds in a room with banana yellow walls—yikes!), and the perfect performances by actors with model-perfect faces, Almodovar’s movie lacks the clarity and directness of Hitchcock’s black and white classic.

Both films deal with the effects of sin. Hitchcock goes to the heart of the matter; Almodovar dances around it. That is why the first film haunts me even today, and why the second one, while it held my interest for awhile, didn’t move me.

Hitchcock understood and conveyed how sin can lead to more sin, and eventually to violence, corruption and death. He also understood that evil often masqueraded as a gentleman with a warm and welcoming face. Almodovar conveys the allure of evil—an undisguised homoeroticism that is on view in all of his movies and comes front and center here—but he has a hard time portraying its effects and its costs.

There’s been a lot of talk in the news lately about officials calling evil a “nuisance.” A nuisance is how Almodovar seems to look at the concept. He lacks the will to face it, the courage to call it what it is, and the resolve to condemn it. He certainly doesn’t let his handsome characters pay a price for it.

The film takes place in Madrid and in other parts of Northern Spain around 1980 (Franco, Spain’s long reigning dictator has been dead just a short time, and Spain is enjoying new political and cultural freedoms). It is the story of two boarding school boys who reunite after they grow up. Ignazio (Gael Garcia Bernal—“The Motorcycle Diaries”) is an actor and screenwriter, and Enrique (Fele Martinez) is a director (I’ve mixed the identities up a bit here in order not to give too much of the plot, which involves some identity changes, away).

Ignazio has written a screenplay which he wants to star in and have Enrique direct. The film would deal with the traumatic experiences and the effects of their education in a Catholic boarding school while under the tutelage of a sexually abusive priest, Father Manolo (Daniel Gimenez-Cacho).

After school, the boys’ lives take many turns. One or the other becomes involved in homosexuality, transvestitism, drug addiction, blackmail, identity theft, murder, even fratricide. The mayhem and the mix-ups get confusing, but eventually things clear up in time to let the viewer ponder a shocking crime.

Unfortunately, by then, it’s too late. The suspense has been watered down because there’s not enough clarity in the story. It’s too muddled to evoke true horror. I was only left with a sense of disillusionment.

When Paul wrote to the Romans he spoke about what could happen to a people when they turned from God, and from the plain truths He has shown them…”They become futile in their thinking and their senseless minds were darkened.”

The characters in “Bad Education” wade through streams of bright colors and lofty torch songs and lush Galician landscapes, but underneath those cool waters is a dark and murky bottom. Almodovar shows us the surface currents, but he avoids the depths, and the plain truth about the human soul.

Positive
Positive—Before I begin my review, I would like to state that this film is rated NC-17. Mind you, NC-17 does not denote that the film in question is pornographic. What NC-17 means is that the film is slightly more honest in its depictions of sex and violence than an R rated film. Over the years, a stigma has developed around the NC-17 rating, and is often considered the “kiss of death” to the films with which it is awarded. BAD EDUCATION is rated NC-17 for a scene of explicit sexuality which takes place within the first 15 minutes of the film. If you are sensitive to films with portrayals of homosexual content, I would ask you to skip this film altogether. However, if you are a Christian who is firm in your faith, and you’re intentions for seeing the film are pure, then I would recommend this film wholeheartedly. In either case, it is always best to follow your convictions.

On to the review… This is one of Pedro Almodovar’s best films. It is also one of his most personal films, because elements within the film are autobiographical in nature. This film is told in a complicated narrative structure, which holds the audiences attention. Most have said that the film is hard to follow, and I, personally, did not find this to be true. The story is about Enrique and Ignacio, two childhood friends at a Catholic school who fall in love with one another. The pedophilic priest, who is in love with Ignacio, has Enrique expelled in order to continue his sexual abuse of Ignacio.

Years later, Enrique is now a successful filmmaker who is looking for a new project. One day, a man claiming to be Ignacio shows up at his door with a screenplay entitled THE VISIT. He says that the screenplay is partly based on their childhood, and it contains a supposedly fictional sub-plot in which the character based on Ignacio blackmails the priest for a million dollars. Enrique decides to take on the project, but suspicions are aroused when circumstances cause him to doubt whether the man claiming to be Ignacio is really who he says he is. From here on, the film delves into a film noir mystery, all the while going back to the “film within a film” THE VISIT.

The acting and direction are amazing here. Gael Garcia Bernal delivers an Oscar worthy performance as Ignacio/Angel/Juan. Fele Martinez is equally impressive as Enrique, and conveys the emotions that his character experiences very effectively. Almodovar proves once again that he is a master of the medium, and the music is amazing. Once again, if you are easily offended, the NC-17 rating should be warning enough. However, if you are a film buff who craves substance, I would highly recommend it.
My Ratings: Moral rating: Extremely Offensive / Moviemaking quality: 5

Steven Adam Renkovish, age 27 (USA)
Neutral
Neutral—…It deals with murder, blackmail, stealing, the list goes on and on. Unless you wish to gain a celluloid experience about the unconverted, secular world and the pain and reputed pleasures of the transexual/homosexual/bisexual individual, then you need not spend time with this movie.

It presents amorality, not immorality mind you, as the main character seems not to be able to distinguish between right and wrong, in its perplexing continuum. An odd statement he makes before he gives the pure-heroin to the ex-priest who gives it to the main character’s transexual brother and ultimately causes an overdose, hints at his knowledge of wrong-doing in that he refuses to give the heroin himself to his brother saying, “What do you think I am, a monster!” Though that is the only time he admits wrongdoing. He normally sees both good and evil acts as equally desirable. Herman Hesse’s Demian still exerts its influence all these years later. As when he first thinks to steal his ex-boyfriend’s money, but finding out the man has a wife and child and is broke and unemployed, he instead places money in the sleeping man’s wallet.

The child-molesting priest in the film-within-a film has some kind of conscience as a fellow-priest kills the transexual when he tries to blackmail the priest. He says to the killing priest that God has witnessed this killing. The priest who does the killing replies, yes, but God’s on our side, so it’s forgiven.

Thus this is a very complex and intellectually challenging film for the Christian who is secure in his faith and wishes to gain a painful insight into how the unredeemed live and die—in order to better be able to witness and reach out to such individuals…
My Ratings: [Extremely Offensive/5]