for some crude humor and language 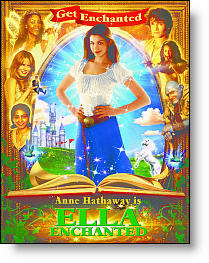 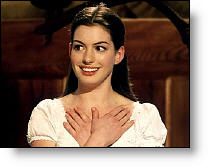 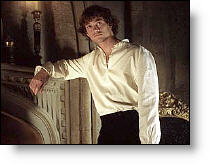 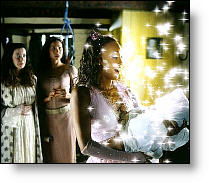 This film is based on Gail Carson Levine’s novel of the same name.

Do you remember back when “fairy tales” ended with dramatically romantic, closed mouth kisses and as little girls our hearts warmed a bit as a sigh crept up from deep within our spirit? THAT is exactly the feeling I was hoping to “pass on” to my daughter as we went to see “Ella enchanted.” The kisses in this movie though, are not closed mouth. To go one step further there is a small amount of cleavage, an excess amount of bare midriffs, talk of liking someone’s “butt” and a comment made about girls “tonguing” the floor that the prince supposedly walked on.

That being said though, it’s a sweet movie, and in this generation of ratings often being far too lenient, it keeps its “innocence” fairly intact. I am not trying to pick it apart; I do not regret taking my daughter to see it, however, it does earn its PG rating easily.

Ella (Anne Hathaway of “The Princess Diaries”) is a girl born in the magical/fairy tale world that lives in many of our imaginations. There are dwarves, ogres, giants and fairies. When Ella is born, her fairy Godmother, Lucinda, gives her the gift of obedience, trying to demonstrate how merely telling the baby to sleep, and wake, are blessings which her mother should be proud. Her mother, however, can see the problems that may arise with this “gift” later in Ella’s life and tries to get Lucinda to take the gift back. She will not, and such is the path of Ella’s life—doing whatever people idly “instruct” her to do. (Example: At a birthday party her house-fairy and confidant (Minnie Driver) tells her to “dig in,” and Ella begins eating handfuls of birthday cake.)

Later, Ella is grown, and in college. Her Mother has long since passed away, and Ella’s father remarries a less then pleasant woman with two wickedly, less-then-pleasant daughters. (Ahhh yes, the wicked step-mother and her two wicked step-sisters! Sound familiar??? There are many intentional references in this movie to the beloved story of Cinderella. Starting with her name (Ella), to quick glimpses of glass slippers, and a reference to her cleaning the fire place. For those familiar with the classic tale it is sort of fun to see all of these reminders.)

Regardless of Ella’s “gift” of obedience, she has a strong mind, will and strong opinions. While slightly resembling the Cinderella of the classic stories, she is more free-spirited and highly political, modern day version of who Cinderella possibly would be today. Her stance on “political issues” within her kingdom, and her new found familial relationships are what begin this whirlwind of a delightful adventure as Ella goes on the journey to find her Godmother and freedom from this “gift/curse.”

This movie is filled with music we all know and love, humorous “references” to our modern day world and the same sweetness in character from Anne Hathaway that we all loved in “The Princess Diaries.” There are times you feel like dancing. Throughout the screening I attended, audience members were singing along.

There are times when this film may remind you of “A Knight’s Tale” or perhaps “Grease”—and definitely “The Princess Bride” (the prince’s uncle is played by Cary Elwes). Elwes does a wonderful, yet sinister job in this new film. But that does not mean it is dull or clichéd. It holds it’s own very well!

There are a few things that may concern some parents. As I mentioned before, there were a few spots of cleavage and many bare midriffs. The ogres’ pants ride just low enough for their “derrieres” to be insinuated as a joke. There are bodily sounds made a few times, and a small amount of violence (only in two scenes). There is a serpent that belongs to the prince’s uncle, who is quite evil/sneaky, but not overly scary.

I compliment Miramax for not making the romance between Ella and Prince Char the main plotline in this movie. Instead, the story is about a girl who embarks on a “larger then life” journey to remove a curse from her life—merely to find herself, inner peace, strength, courage and to change her world. Our children need to see that there is more to life then falling in love, but that being you and the young man or woman that God wants you to be can be even more fulfilling!

Overall, “Ella Enchanted” is a beautiful story and a great movie for families to see together—highly entertaining, heartwarming and fun to watch. (And afterwards, mothers and daughters could read the novel together.)

There are various “door openers” for family discussion: What is persecution? What is “racism”? Why is it important that the elves, dwarves, giants, ogres and people in the story all get along? What are the effects of peer pressure? (Believing in yourself, and not succumbing to what others say you will be.)