for some mild action and rude humor 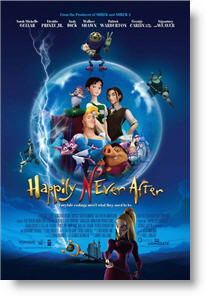 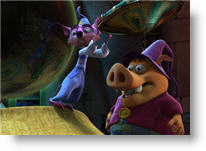 Magic in the Bible

January is the month when Hollywood releases the movies it does not expect to be smash hits. However, every now and again there are some gems that appear. Last year, it was “Hoodwinked,” which turned out to be one of the better animated films of 2006. This year, “Happily N’Ever After” hopes to be that January gem.

The plot involves the now cliche fractured fairytale. In this go around, the wicked step mother of Cinderella steals a magic wand that insures all the fairytales have a happy ending. Naturally, she uses the wand to insure that there will be no more happy ending (hence, “Happily Never After”). Our heroes include a warthog, a …well, thing, Cinderella herself (voiced by Sarah Michelle Gellar), and a simple cook who is in love with Cinderella. Together they must stop the wicked step mother, but can the cook convince Cinderella that he is her hero and not Prince Charming?

The film is billed as being from one of the producers of “Shrek,” but it more reminiscent of last year’s “Hoodwinked.” This is true on several levels. Even the voices are reminiscent. Like “Hoodwinked,” “Happily N’Ever After” features the voices of NPatrick Warburton, Andy Dick, and Wallace Shawn. Both are fractured fairytales. And both pick up steam as the story goes along. In fact, “Happily N’Ever After” starts out at a crawl. Still, once the Wicked Step Mother (voiced by Sigourney Weaver) steals the magic wand, things pick up. Soon Rumplestilskin, the Giant from Jack’s beanstalk, the wolf from Little Red Riding Hood, and many other evil characters start to take over Fairyland.

Morally, the film is similar to “Shrek.” There is some potty humor, but not as much as some in the genre. We are told that someone “pees” in drinking glasses, someone’s “butt” is compared to a shopping mall, there is the obligatory passing of gas, a diaper filled joke, and a character fills his hat by blowing his nose.

Another subject which parents may want to use as a subject of discussion after the film is whether or not the theme of the movie is “self-empowerment.” This teaching, ever so popular today, can easily pass into the realm of not trusting in God. The characters do not seek God’s will, but are told to “go for” whatever they desire.

Our hero, the cook, is sometimes not a very heroic, or even likable, character. He seems selfish and uncaring. He only desires Cinderella, and one wonders if he would ever have saved the kingdom had Cinderella married Prince Charming. This is, therefore, a chance for parents to discuss the subject of faith and trust with their child. Our wishes are not always God’s. If we seek “self-empowerment,” then it is not God’s will we pursue with all our strength, but our own. This can actually be self-defeating and harmful, if we do not seek God’s counsel.

What of the movie on a cinematic level? When I read that my local movie critic gave the movie an “F,” I knew that “Happily N’Ever After” was bound to be worth watching. Admittedly, the movie is not on the level of last year’s “Hoodwinked” or the “Shrek” movies, but it is an interesting and fun diversion for an hour and a half. “Happily N’Ever After” is a fairly good, fractured fairytale worth a look.

Positive
Positive—Although this movie is nowhere near the quality of “Shrek,” this movie had a very similar feel to it. The story revolves around fairy tales that have gone wrong due to the wicked doings of the evil step mother of Cinderella. The kids will love it, mine did, and there are some in-jokes for adults although not as riske as the afore mentioned Shrek series. For me personally I found the movie a little weak and some of the jokes fell flat but for the most part the movie was enjoyable albeit a little cliched at times. There are moments when magic is used and the idea that all power comes from the same place (good and evil) is there too but not a major feature of the movie. SPOILER ALERT!!!… I loved the seven dwarfs being portrayed as Hillbilly-types, along with music that wouldn’t be out of place in the movie “Deliverance.”

As a pastor I found nothing in this movie that made me question the intention of the movie makers. The movie was backed financially in part by Lionsgate, the company that produced the Hostel and Saw series or movies, so some may have problems with this movie because of this fact but as I said the movie is fun, devoid of any sexuality, extreme violence, and cuss words—a safe bet for the kids.
My Ratings: Better than Average / 3

Pastor Christian St. John, age 35
Negative
Negative—I am a mother of two girls, soon to be 5 and 7. My 5 year old fell asleep, and my 7 year old thought it was OK. I on the other hand don’t understand why it is so hard for film producers to make a wholesome movie—without calling everyone names or degrading each other. This movie moves at a SLOW place, with no real excitement. The negative attitudes are a real turn off. If you’re looking for a good film to watch together as a family, with some good clean fun, this is not it.
My Ratings: Average / 2

Lori, age 31
Comments from young people
Negative—I viewed this film with my brother recently. …“Happily N’ever After” seemed to be one of the slowest, most tedious, most unlikable movies I’ve seen in a good while. Main reasons I don’t like it:
A. Tedious. Very slow. Even the “action” scene/s seemed rather draggy.
B. The movie is rather like a soap opera in many ways. There isn’t really a likable character, nobody really has especially good attitudes.
C. Movie-making quality wasn’t that great. The graphics weren’t all that superb, the story was pretty bad, jokes not incredibly funny, etc. Really, it was just bad all around.
I will say, however, that the voice acting was pretty good and it did have its moments, but I don’t recommend it. It doesn’t really seem fair to put this in the same field as “Hoodwinked.” “Hoodwinked” may have been amateur on graphics, but the story, humor, and overall enjoyment level were a lot higher. I’d recommened “Hoodwinked” over this one. Nothing really objectional. There are just more enjoyable movies to see.
My Ratings: Better than Average / 1½

Stephan, age 16
Positive—“Happily N’Ever After” is a great movie. my dad, brother, sister and I went to see it. My sister (7), who gets scared really easy, was not scared at all. she loved it and wanted to see it again. Even though it is not Christian, it is still very good. Yes, it was wrong for Rick to hate the prince, but that’s what the world says. So what if the Prince was some guy who is an airhead, in the end he did what was right. Christians can’t always do what is right. But what they can do, is this. If you do wrong, make it right. And Cinderella, Rick, and the Prince they fix what is wrong. Overall, I think this is a great movie, and I loved it!!
My Ratings: Good / 4

Hannah M., age 13
Negative—…I was very offended by the stepmother’s dress (which was just as bad as the teens' dresses in the movie). I have never seen an animated dress so low and open like this one. When I was looking around at the audience, the parents were ether almost asleep from the drag of the movie or wide awake from shock of the clothes. My mother and I went home after 25 minutes. I DO NOT RECOMEND THIS MOVIE FOR ANY AGES!
My Ratings: Moral rating: Extremely Offensive / Moviemaking quality: 3