for language and a sex scene 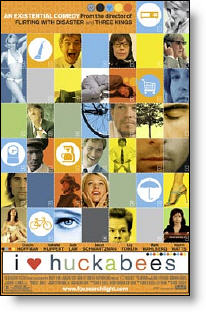 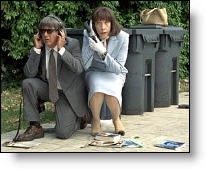 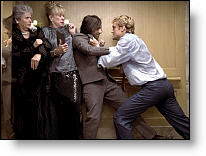 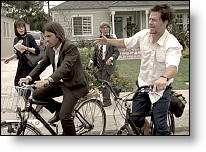 Discover HOPE for your future!

Here’s what the distributor says about their film: “This ensemble comedy is about a married couple, the Jaffes (Hoffman, Tomlin), who work as detectives, helping people solve existential crises in their lives. For those not familiar with the philosophy-based term of “existential crisis,” some examples of such a crises would be a “mid-life crisis,” a “what am I doing with my life?” sort of hang up, “my life has been a mistake,” “my whole life is a joke,” etc.

Their first client in this movie is Albert Markovski (Schwartzman), who is experiencing angst because of his position at Huckabee’s, a popular chain of retail stores. Investigating his workplace, the Jaffes take on one of Albert’s coworkers, Brad Stand (Law) as a client as well, which leads them to investigate his girlfriend, Dawn Campbell (Watts), who is the spokesmodel in the Huckabees TV commercials.

Meanwhile, Albert teams up with an existential firefighter (Wahlberg) and a French radical (Huppert) out of frustration with the idea that the Jaffes are helping the very man who seems to be part of Albert’s existential crisis.”

“No manure, no magic” is one of the theories about life recited in this existential comedy “I Heart Huckabees.” This theory may be applied to this piece of entertainment, but it seems there is more manure than magic while offering a few laughs along with it.

Albert Markovski (Jason Schwartzman—“Rushmore”) decides to visit an “Existential Detective” Vivian (Lily Tomlin) to help him determine the reason for his recent coincidence and, further, to discover the meaning of the universe and why we exist.

Vivian and her partner, Bernard (Dustin Hoffman) willingly begin treating Albert, but go beyond what Albert is comfortable with when they begin interfering with his job at the super-American corporation “Huckabees”. Albert’s journey for answers brings him into friendship with Tommy Corn (Mark Wahlberg), a quasi-romance with another existential philosopher and to some kind of understanding with the Huckabees sales executive he has been contending, Brad Stand (Jude Law).

The very first lines of the film entail a voice-over with profuse profanity including twelve letter words and other offensive ideas. It is obviously done for shock value, but this kind of foul language also appears in various other parts of the movie. There is also one brief explicit moment of two people having sex. Everything is presented in a humorous fashion and, post modernly, doesn’t really try to adhere to any kind of moral universe.

Potentially, the most offensive scene would be where Albert and his friend Tommy eat dinner with a typical American Christian family. After the daughter recites the Lord’s Prayer before the meal, the discussion becomes a confrontation between Tommy and the father regarding issues of misusing oil and driving SUVs. At one point, the daughter interjects and states, “Jesus is never mad at us if we live with him in our hearts,” to which Tommy retorts, “Yes, He is. He most definitely is.” This scene is fairly early in Albert’s search for meaning, so the impression is that the writers wanted to bring up the idea of Christianity, only to tear it down and invalidate it.

The whole story is very absurdist and abstract and can also make you laugh. One moment involves Tommy and Albert performing a kind of therapy by hitting each other in the face with a large rubber ball. Tomlin and Hoffman are also entertaining in their dynamic duo antics, and Jude Law aptly develops his cocky salesman character without every going over the top. Wahlberg goes over the top, but makes his shtick work. Schwartzman (looking like Tom Cruise from “Magnolia”) gives a sharp performance, and builds on his ability to carry the role of the quirky main character. So much of the movie is philosophical ranting and raving and overwrought humorous drama that it really is a fun piece for these actors, providing most of the entertainment.

With hints of “Magnolia” and dashes of “Rushmore,” this film does carry some appreciative originality. The dialogue is well written and the characters well played. However, while the laughter is there, it is usually short-lived and overall doesn’t give you much to walk away with.

Positive—My first two thoughts after walking out of the film were, “I’m going to need to REALLY think this film through” and “I have to see it again.” As of writing this, I have not. This is a very good, thought-provoking film. That said, those who see it with no Biblical grounding in their lives may well be shockingly confused and annoyed by it. If you are a beginning Christian, do not see this film alone.

Okay, the acting is great. I, for one, cannot get enough of Naiomi Watts. I just think she’s wonderful. It was great to see Jason Schwartzman doing a good movie and not “Slackers,” and he is one fine actor. David O. Russel wrote and directed very well, and there was a nicely understated style to the cinematography.

Now, what is this film saying? Well, it seems very clear to me, as a Christian, that the film shows the ineptitude of philosophy. I don’t see how anyone could argue that. The characters bounce from one to another as their feelings dictate, with each set of “detectives” vying for their own view, but in the end, both come up short. Why? Because philosophy will always leave you saying, “Yeah but…” However, the Bible, which many philosophies were derived from, has definitive answers. There is nothing wrong with questioning things, but where people go wrong is when they preoccupy themselves asking question after question while not simply not looking for the answers, but flat out ignoring answers when they are right in front of them.

I can say “Do I exist?” all day long, but the fact that I’m asking the question is, itself proof that I do exist. I can see me. So can other people (although I’ll grant that sometimes it FEELS like we don’t exist to other people). We exist. It is a fact. Can we move on now?

So, from a Christian perspective, where Albert and Tommy end the movie is very similar to what the Bible says. That (SPOILER!!!…) we are all indeed connected (read C.S Lewis’ “Mere Christianity” for a more comprehensive look into that), but that connection does not prohibit pain and suffering; yet there is joy in this life, and there is a great deal of comfort in knowing that our experiences are similar, and we can help each other through this life better by sharing with each other. (Look at 2 Corinthians 1:3-5) So there is some truth there, and hopefully those characters can come to realize the full extent of that truth.

I did have a few problems with the film. First of all, the last two shots of the sex scene in the mud are totally gratuitous. Why were they in this film? As well, the shot of Jude Law as a woman: What does this add, save for a pointless moment of shock value? And lastly, it is very interesting that in a film about PHILOSOPHY, there is one religion mentioned: Christianity. I have heard that David O. Russel is a Buddhist, which accounts for the mention of Phil Jackson.

It is fascinating to me that the only way to discredit Christianity is to misrepresent us terribly. OF COURSE the Christians are seen as stupid and obnoxious, and let’s not forget, uninformed. By portraying Christians in this light it releases the burden of actually discussing what we believe. If you can eliminate the credibility of Christians, then who would ever want to look to Christianity? Also how interesting that that scene, the ONLY scene where we see most of those characters, was the most intense scene in the film. I do truly believe David O. Russel intentionally went after the Christian faith with that scene.

That said, our God is not trumpted by a film. Galations 5:7—“Do not be deceived: God cannot be mocked.” You can try to mock God, attempt to undermine His truth, but it is IMPOSSIBLE; hence, even though he probably didn’t intend to, Mr. Russel has made a film where two of the characters could easily become Christians, and where even the detectives themselves begin to see that their thinking is incomplete. Films like this one need to be scrutinzed, point by point. As well, they deserve to be, and by that I mean that so much thought went into this film, we ought to give it credit and talk about it. It has very high goals, and it should be examined as having such. It may fall short in some areas, I believe it certainly does, but you know what? At least it’s trying.
My Ratings: [Average/4]

Jason Eaken, age 21
Positive—Yes, it starts with some pretty bad cursing. Yes, there’s an uncomfortable “love” scene. And yes, Marky Mark says that Jesus is definitely mad at us. But this film will strengthen your faith in whatever you believe in, especially in humanity. We are capable of being good and we are capable of forgiveness (of self and others). Jude Law’s meltdown will have you tearing up from its genuine emotional power and because it is incredibly funny (or it ought to). “You rock, rock!”
My Ratings: [Average/5]

Alex Brunk, age 19
Negative—Extremely boring. Extemely offensive. This film could easily go as far as teaching evolution. The language is the movie was very hard to deal with as a christian. I don’t think this is a movie that anyone would take Jesus along to see.
My Ratings: [Extremely Offensive/1]

TF, age 37
Comments from young people
Positive—I personally thought “I Heart Huckabee’s” was a phenomenal film, from a film-making point of view and, in a way, a philosophical one as well. This film boasts what is easily the best role of Jude Law’s career, and pulls extraordinary performances from Schwartzman, Whalberg, and good ol’ Marky Mark. They tear into the script, a piece of brain candy that, while at moments may be rambling, ultimately is satisfying and hilarious.

Morally, this movie is really a question of how you feel on the issues discussed. I am a Christian, and I know God is in control of all things. However, sometimes having a philosophy to go on besides that is not such a bad thing. I don’t mean that religion should be secondary, or interchangeable. I’m merely stating that, in addition to seeing the world through Christ’s eyes, you should be able to see it through other points of view as well. If you’re not incredibly closed-minded and are not easily offended, I recommend this film.
My Ratings: [Very Offensive/4]