My Date With Drew

for mild thematic elements and language 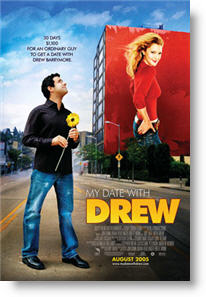 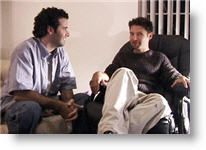 “If you don’t take risks, you’ll have a wasted soul,” is a quote from Drew Barrymore that kicks off this ultra low-budget documentary adventure. While she may not be the most significant person to quote, one can understand why it is used after seeing how obsessed the main character is with this movie star. In the end, this is an innocent, homemade story of one guy pursuing a dream that he and others know will take a small miracle.

Brian Herzlinger has had a crush on Drew Barrymore since he was six years old, shortly after seeing her in E.T. (1982). Twenty years later, Brian has won $1100 dollars on a game show where the answer for the winning question was none other than “Drew Barrymore.” Refueling his affection for Drew after this win, Brian decides to use his prize money to go for the bigger prize of getting Drew Barrymore to go on a date with him. With $1100 dollars and 30 days, Brian begins his adventure, and with the help of several friends decides to document the entire experience.

One of the most dynamic aspects to this simple-hearted amusement is the outgoing personality of Brian. Brian has a dream, and his mission is clear. He will do whatever it takes in order to attain his goal of one date with Drew Barrymore. He puts jobs on hold, recruits friends for help, gets in shape, contacts anyone and everyone who may know Drew or have contact with her, makes a movie trailer inviting her on the date, creates a Web site, and even devises a way to sneak into the after-party following the premiere screening of Charlie’s Angels II. The scene that deals the greatest amount of humor is when he casts a Drew Barrymore look-alike to go out on a date with him as a trial run.

Apart from some of the less than legal tactics that Brian and his friends employ at various points in their adventure, this whole project is a very innocent attempt at one man aspiring to make his dream come true. After Drew Barrymore herself found out about Brian’s project, she referred to it as “very sweet” and “the most darling project she has ever heard of.” She also said she liked it because it was about her. This was good news to Brian; in the beginning he was afraid of being perceived as a stalker.

Overall, the movie is very clean and pure-hearted. However, there is one instance when Brian uses the Lord’s name in vain after exhausting himself while working out. Another scene involves Brian visiting a psychic to get insight into what might happen with Drew. In one of the following scenes, Brian refers to the information the psychic gave him and shows it as being something helpful. It is a short scene and a very small part of the story, but I didn’t like it. Perhaps they added it in to show yet another way to pursue Drew, but they could have done without it.

You don’t necessarily have to be a fan of Drew Barrymore to enjoy this movie. She is relentlessly talked about and focused on from beginning to end, but this story seems to be more about Brian’s pursuit. Proverbs 12:27 says, “…the precious possession of a man is diligence.” Brian clearly exemplifies this idea. Watching him can really be a motivation for us to follow our dreams. And what is more, if he can do so much to try and get a date with a movie star, what can we do to pour out our lives for the Lord? Think of the things that could be accomplished, not just for selfish reasons, but for the kingdom of God.

Violence: None / Profanity: Mild / Sex/nudity: None

Positive
Positive—…an absolutely hysterical movie. Allthough my wife thought we rented a movie, not a documentary, we gave it a try anyways. Its a great representation of friends and determination. Its kind of funny, but you could put this movie into what God does in persuing us. He goes through evey avenue possible to just to have one converstion with us, using friends and complete strangers. The main character is very committed to his goal of getting a date with Drew Barrymore within 30 days. This timeline is set up because he buys a video camera from Circuit City which has a 30 day return policy on all electroinics. If you are looking for a feel good comedy to escape in on a Saturday night, please go rent this, you’ll love it.
My Ratings: Good / 3½

Christopher, age 26
Comments from young people
Neutral—My friend and I rented this film altogether by accident, and completely under the impression that it was a typical, Hollywood chick flick. About 15 min. into the film, we realized we had gotten ourselves into a documentary of sorts. We laughed and chided ourselves for our oversight, and chose to give the quirky man chasing Drew a chance. Turns out, it was a funny story, like one you would expect your just-out-of-college friend to tell you at a backyard cookout. It resembles something college kids would do actually. Flows nicely, makes you smile, and gives you some good clean entertainment. I only wish I knew more guys like this, the ones who will get up and do crazy things, just for the sake of getting up and entertaining themselves.
My Ratings: Good / 3