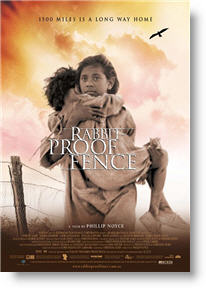 It is 1931 in Western Australia. A new government policy includes taking half-caste children from their Aboriginal mothers and sending them 1500 miles away to what amounts to be trained in camps for indentured servitude, in order to ‘save them from themselves’. However, three girls dare to try to escape and find their way back home. The girls’ only hope is to find the rabbit-proof fence that will take them back to their villages and their mother. Against them are a professional tracker, the local constables, the government’s “chief protector of Aborigines,” Mr. A.O. Neville (Kenneth Branagh), and the very desert itself.

Moral content: There is plenty to admire in this film. Racism and prejudice are portrayed as extremely negative and hurtful torwards the people they are directed against. Mr. Neville is blinded by his own prejudice into thinking that he is doing the right thing (at one point he comments, “If only they understood what we are trying to do for them.”) while he can’t see that his attempts at assimilation are in fact hurting the Aborigines more than helping them.

Molly, the oldest girl is a mature figure of determination and leadership. She automatically assumes the role of leader and bears the responsibility for her sister Gracie and cousin Daisy during their long trek across the desert. She willingly carries Gracie for most of the way when Gracie’s legs hurt too much and even goes out of her way to find Daisy when the girls are separated. Molly does steal some clothes and food from farms along the way, but she is caught one time, and one could argue that their situation was rather extreme (not that I’m justifying theft). Elsewhere, others characters show kindness to the wandering children.

Violence/scariness: There is no violence in the strictest sense, but this is not a movie for children. There are several very intense scenes that would be too frightening. The scene where the girls are forcefully taken from their mother would be too intense, and several scenes during their journey home while they are pursued by the trackers are also somewhat heavy. In another scene, a girl at the institution is beaten for running away (offscreen). We see two men carrying a very dead and rather charred body of an animal which might be unsettling for those sensitive to animals.

Sex/nudity: There is no explicit sex or nudity, but when the girls are aided by a servant, and she hides them in her bed while she is away for a few minutes, some bad goings-on are implied when her white master enters the room, takes off his trousers and prepares to get into bed thinking that the servant is there. Later, she begs the girls not to leave, but to stay with her all night, saying that he’ll come back, implying that whatever was going on, it was not willingly on her part.

Language: No language problems, except that everyone has a bad habit of calling Mr. Neville—‘Mr. Devil’.

Spiritual content: At the beginning, Molly’s mother tells her that the eagle is the spirit of the wind. The only Christians portrayed in the story are not particularly bad guys, but not particularly good. The institution is run by Christians, and there is a church there where all the girls are required to gather every morning. There is also a prayer that they recite before meals. At another time, they sing a mildly Christian song for Mr. Neville. While all of these things are positive, they are shown as negative in that the girls resent being taken from their mothers (naturally) and don’t understand why they are being taught things that don’t make any sense to them.

Conclusion: Everything about this movie impressed me. The filming and directing is excellent; the music is unobtrusive; the Australian scenery is at times breathtaking, and all of the actors are superb in their roles. Special mention should go to the three talented young actresses who play the lead roles. But at the heart of this little film is a powerful story about a sad but little-known period in Australia’s history. The movie also carries strong messages about the evils of racism and the strength of love and courage to carry even these children through the hardest of situations. I recommend this movie to anyone who can find a copy and although it is too intense for younger children (many wouldn’t understand what is going on anyway), it is excellent for adults, teens and maybe older children.