for drug content, language, sexual material and some violence 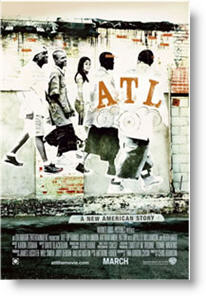 “ATL: The New American Story,” opens loud with a hip-hop track in the background while we’re introduced to the story’s ensemble of family and friends all living in the Mechanicsville area of Atlanta. In Atlanta, better known as ATL, a custom grill describes gold-capped teeth and spinners bling-bling from roller skate wheels as well as from souped-up cars. Although the movie is set in a neighborhood, it manages to explore universal themes of race, class, caste and gender.

This tale is narrated by 17 year-old, high school senior, Rashad (played by rap artist Tip “T.I.” Harris). By combining comedic scenes and drama, we are introduced to his four friends and their family situations. Demur, blue-collar, Rashad hides his dreams in an artist’s notepad and revels in his parental role to his younger brother, Ant (Evan Ross). Rashad’s straight-man nature is offset, by high-energy roller skating, where he and his friends are driven to compete for a coveted award at the Cascades roller rink. This competition keeps them together as friends and serves as a diversion as they plan for their transition from high school to young adulthood.

“ATL” portrays the grit of urban life with several scenes involving drug deals on school grounds, tightly-clad clothing, fondling, and profanity. There are also references made to being a “pimp.” The N-word is used in conversations as well as in the music. Women are objects of crude fascination, as several close-ups, including the trailer, focus on various parts of female anatomy. Rashad and his love interest New New (Lauren London) have a bedroom scene, as lights magically go out. In the same evening, Ant (a teenager) experiences his first sexual interlude in the backseat of a car. There are several scenes of violence involving Ant’s drug dealing mentor Marcus (Antwan Andre Patton, Outkast’s Big Boi).

Marcus, who has the appeal of the serpent, has an arsenal which includes weapons (gun, knife), physical beatings and verbal threats. His loyalty is only to money, and he wears his lack of conscience like it was skin. His only virtue is that he honest about what he is–selfish. Marcus’ sinister character is balanced by a host of players with their own faults (thieving twins, uninvolved parents and untruthful friends). Uncle George (Mykelti Williamson of “Forrest Gump” fame) provides humor as well as sage advice. Parent and mogul John Garrett (Keith Davis) is a good example of an adult coping with his past.

This well-balanced cast of young newcomers and seasoned actors demonstrate various perils of human nature: greed, lust, pride, anger and an unforgiving nature. More poignantly, “ATL” reminds me of the Parable of Talents (Matt. 25:14-30). Ant was like the servant who wasted his time and didn’t use his talents to the fullest; he didn’t invest it so it could grow. Many people are impatient and not obedient to God; looking for a short cut. Maybe a real-life Marcus could be convicted and converted, and use his gift of persuasion to encourage someone to live a Christ-centered life.

“ATL” tries a little too hard to portray all the bandits of urban culture. The attractive element about this feature though is that it highlights young people with friends, having fun and making real-life decisions. This movie has a lot of warmth. It embraces the concept of honoring parents by showing the consequences of faulty decisions. However, the use of profanity and vulgarity, limits a segment of people from truly enjoying the cinematic experience of this “True American Tale”.

Positive—I found the movie to be if anything, not what I expected. The main message in the film did not glorify the life of drugs and violence, but rather highlighted it’s often tragic end. A lot of the negative aspects in society were actually shunned upon. Though premarital sex is something blatantly forbidden in the scriptures, the “sex scene” between Rashad and New New actually faded to black (with the lights magically going off) with both individual’s clothes on and sitting upright in the bed. Compared with contemporary media, that was anything but graphic. I believe the film skillfully dealt with the commonly ignored themes of race, class, caste and gender; many of which are often deliberately ignored, especially within American culture. Those sore issues in our culture may be the exact reason for some to attempt to write it off as an “urban, hip-hop” movie, though music has no real implication in the film’s story line.
My Ratings: Average / 4

Douglas Gaither, age 24
Positive—I originally thought, after viewing the trailer, that “ATL” would be another hip-hop movie somewhat milder than the movie about Fifty Cent, “Get Rich or Die Tryin.” I discovered after viewing “ATL,” that, in my opinion, the movie was instead similar to “Roll Bounce.” “ATL” and “Roll Bounce” are both about young teens dealing with friends and family and a lifestyle that is centered around frequent visits to the local roller skating rink. In addition, both have profanity and teenage girls with revealing clothing. A redeeming quality of “ATL” is the actual story itself, which is really a urban teen coming-of-age drama about several friends and a sibling that must make some tough decisions that will have consequences for the rest of their lives. The sex scenes, profanity and revealing clothing in “ATL” is definitely less than some other similar movies and is no exaggeration of the reality of some teen lives. This is an entertaining film with a message, if you are not offended by the lifestyles it depicts.
My Ratings: Average / 3

Yvette West, age 41
Comments from young people
Positive—While this isn’t “Menace to Society,” this is a good “ghetto movie” that is more light-hearted than most.
My Ratings: Average / 3