for crude and sex-related humor, and for language 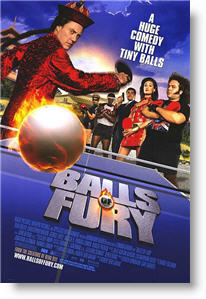 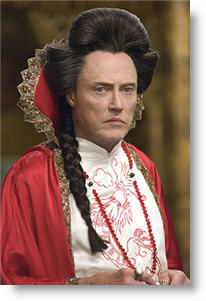 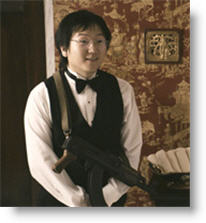 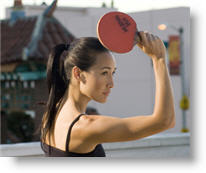 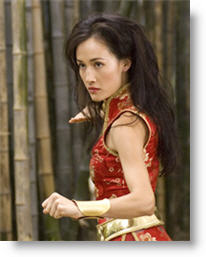 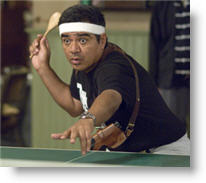 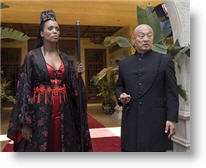 “Balls of Fury” is a comedy about an “underground” ping pong tournament. That is appropriate, since fans will doubtless want to watch this underground. It may be worth a look just to see Christopher Walken playing the role of an Asian mobster and ping pong has been. It is one of those movies you watch late at night when no one knows that you are watching—the kind that is both oh-so-bad and oh-so-good, if you are into absurd comedies, outrageous silliness, and are bored out of your mind. In this case, mostly bad.

First, parents should be reminded that PG-13 is usually what used to be rated R. The jokes include plenty of crude, rude, and perverted humor. One involves a running gag about homosexual sex slaves that recurs throughout the film. Overall, the film contains 18 foul words, countless double entendres, and sex noises can be heard. There is comic violence (including attacks to the groin), jokes involving bodily fluids, jokes about prostitution, and ample cleavage.

In many ways, “Balls of Fury” is a parody of extreme sports. The promo itself says that the film takes place “in the unsanctioned, underground, and unhinged world of extreme Ping-Pong.” This is the movie’s strength, but some may consider this a one gag movie. “Balls of Fury” has been compared to “Dodgeball,” and there are many comparisons, but, between the two, I actually prefer “Balls of Fury.” It doesn’t take much to make “Dodgeball” an extreme sport, so seeing ping pong treated as an extreme sport does have it moments. There are some laughs to be had seeing ping pong players constantly flexing their muscles, crushing ping pongs with their bare hands, shouting macho remarks, and… oh yea, being executed if they lose. Says Christopher Walken, “What part of sudden death didn’t you understand?” It also contains parodies of countless clichés from sports movies, including the once humiliated sports star returning to glory against his old nemesis. The funniest part of the movie is probably the ping pong games themselves.

Overall, I thought “Balls of Fury” was better than I was expecting, but frankly I wasn’t expecting much. I was bored out of my mind when I decided to see the film, so it was a welcome distraction for 90 minutes, but with ticket prices today, you might want to wait till it comes out on DVD and then wait until everyone is asleep before pulling it out and watching it. If you are caught watching it, you may never live it down. You will take nothing worthwhile out of this movie. But somehow I suspect it will develop an underground network of fans from those who like absurdly silly comedies.

Ultimately, “Balls of Fury” is unfit for Christian audiences. The amount of crude humor and sexually related jokes should have made the movie rate R. The mature Christian can find better sources of entertainment, and more uplifting ones.

First off, the bad. There are some dirty jokes (mostly by the blind tennis master) that I found offensive and simply unnecessary. One of them, along the lines of explaining the dedication of coming to the tennis lessons to continually frequenting a prostitute because that’s the only prostitute one could afford. Those aren’t the exact words by any stretch, but I found the analogy not only offensive but simply unnecessary. I saw a lady walk out with her kid 15 minutes later, and I worried that that ruined it for them.

There were 2-3 b*** usage and quite a few other s*** references that I thought they could have done without but they were well spaced out not to drive you away and in some instances, were prompted by circumstances.

It was a fun movie, but not as funny as one expects. The movie could have been a perfect sit-in-the-theater, chill-and-watch-a-not-so-serious-movie, but I thought they were trying too hard to be funny in some scenes, coupled with some of the language and that took most of the fun out of it for me.

There is no sex or nudity in the movie except for about 3 passionate kissing scenes.

Overall, I felt that I shouldn’t have bothered with spending money on the movie. This movie isn’t that bad, but I suggest that you save your money and not watch it. It was a decent movie but not worth your $8. Spend it on “Mr. Bean’s Holiday” instead because you can relax and not worry about offensive stuff. Part of my reason for attending this movie was my love for ping-pong.

If you are looking for a movie you can laugh a few times in and walk away not as offended by some language and some other questionable stuff, see “Mr. Bean’s Holiday” instead of this movie (I wish I did). Mr. Bean is not an extremely funny movie either, but you’ll walk away with a smile even though it isn’t as funny a movie as it seems. It is rated G, too, so you can relax a bit more and not necessarily brace yourself for language or statements you may find offensive. …
My Ratings: Very Offensive / 4

Emeka, age 26
Neutral—“Balls of Fury” is a silly movie complete with a few silly, cheap laughs. Its style of humor is akin to that of “Kung Pow” or a Mel Brook’s film, only not as crass. Not much else to allege about this movie.
My Ratings: Average / 3

Jacob Keenum, age 21
Positive—What I liked about this movie was NO NUDITY. It’s hard to find a comedy now-a-days without sex scenes and nudity. Although, there are sexual references and humor, so parents: pay attention to the rating. You can pretty much tell by the title that there will be sexual humor. The main actor in the movie (Dan Fogler) did an excellent job in terms of acting. I haven’t seen him in any other movie, so I was pleasently surprised. I don’t agree with Hollywood’s rating system of PG-13, so even your kids are 13 or 14, I would still preview this movie before allowing them to see it. I’m just glad it didn’t offend me too much at 27 years of age, which happens a lot with the movies that are out. Overall, it made me laugh, kept my interest, and had no nudity or sex scenes.
My Ratings: Moral rating: Average / Moviemaking quality: 4

Monica, age 27
Movie Critics
…aims high but hits too low… far-from-so-great… Most of these actors are here for a good time and an easy check. …