The Invisible a.k.a. Unsichtbar (Germany) 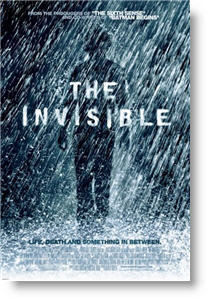 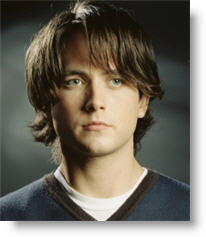 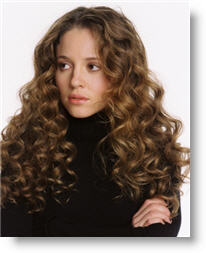 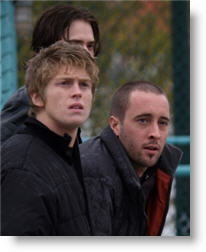 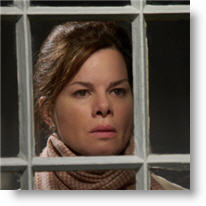 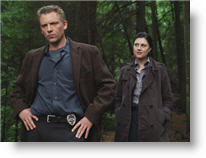 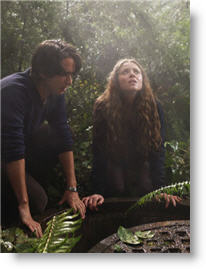 “Life, death and something in between.”

“The Invisible” is marketed as a teen-aged ghost story, but it is actually a social commentary on loss and broken families. David Goyer’s film is based on a Swedish movie Den Osynlige which in turn was based on the Swedish novel by Mats Wahl about a young loner who is nearly killed by a group of Nazi sympathizing skinheads.

Goyer’s film keeps the same basic plot line, but it changes the skinheads to simple punks. They savagely beat Nick Powell (Justin Chatwin) within inches of his life and hide the body. Nick has an out-of-the-body experience and wanders the Earth in search of recognition so that he can rescue his body before it dies.

Compounding Nick’s metaphysical problems are his real-life problems. His father died when he was 13 and he has since been dominated by his coldly efficient mother who expresses her love by giving him things. In the first scene of the movie, we see his birthday being celebrated. When he leaves the table, no one notices and there begins the theme of the “invisible.”

Annie Newton (Margarita Levieva) is the head of the juvenile delinquents who deal in (hold on to your seats) contraband cell phones. She makes money off selling stolen goods while Powell makes money off selling essays he writes in French. Nick has lost his father; Annie lost her mother. There the similarities end. Nick’s aspirations are to enter a writing program in London, while Annie’s aspirations are indeed invisible. Her father is an insensitive brute who has married a lazy woman. Annie is in a relationship with a small-time criminal and her only redeeming trait is that she loves her little brother. However, in the presence of so much hatred, a little love means only that her character isn’t pure evil.

Nick begins to haunt her like a conscience and Annie eventually hears his voice. The repetition of his haunting compels her to do the right thing and in the end she redeems herself. In between, there are numerous scenes of self-indulgent emotional violence consisting of screaming, whining, smashing of objects, and anguished looks.

As a ghost story, it’s terribly ineffective. Without revealing too much, the director manipulates the audience’s expectations then immediately reverses what he just showed. The first time, it was an effective technique; the third and fourth times it was annoyingly predictable and showed a lack of imagination on the director’s part as to how to use the ghost gimmick.

As a movie of teen-age angst and loss, as an allegory of the search for identity in oneself and affirmation in others, the movie was more successful. In one of the opening scenes, Marcel Proust’s novel, In Search of Lost Time is mentioned. The point of Proust’s great novel is that life only has meaning in so far as one can remember one’s past. There is no certain future. The remembrance of the past rests in a taste, a smell, or an object. Nick remembers his father through the tokens of photographs and a small bottle of earth, while Annie has nothing to remember her mother by except her gravestone. They recognize in one another the quality of invisibility: a secret pain which no one can see but themselves. Annie finally becomes “visible” to Nick when she redeems herself.

The worldview of “The Invisible” is existentialism. There is no God, only this life, and according to the tenets of existentialism life only has meaning in so far as one can act in a meaningful way. As you might expect in a movie whose philosophy is that life is meaningless, the tone is unrelentingly depressing. One of the songs on the soundtrack is “I will follow you into the dark” by Death Cab for Cutie which contains the stanzas:

In the metaphysics of the song, Heaven and Hell are closed, and only darkness exists as an open possibility. “The Invisible” has no answer to the problem of life and provides no meaning for its teenage audience. To compensate for a pointless existence, Nick writes poetry while Annie commits senseless acts of violence. Even “love” is shown to be false: Nick’s mother’s love is an extension of her ego; his girlfriend’s love is lust; Annie’s seeming love for him at the end is a desire to atone for her brutality. Consequently, in a universe without God, without hope, without a future, Nick Powell and Annie Newton can experience only pain, loss, and darkness.

Comments below:
Positive
Positive—This movie was very very good full of suspense and action… not really scary. It does have a few GD in it, which is offensive. No sex, but there is a kissing scene… All I can say it’s worth going to see!!
My Ratings: Excellent! / 4

Renee, age 34
Positive—I saw a review on the imdb site just a day before watching “The Invisible,” and the reviewer essentially chalked this movie up to being a teeny-bopper flick, rife with themes of “The O.C.” In one sense, he was right—I think the target audience is teens, and the pervasive use of alternative/rock from today’s music scene gives it the feel of a “Smallville” episode. No matter though; the $15.50 “The Invisible” siphoned out of my wallet (for two) was money well spent. There’s mulitiple themes present in the movie that will stir up different emotions. The idea of “close” friends betraying one another is such an example, as well as redemption for even those who are hopelessly lost. Tie these two notions together, throw in a little plot, and add the lights and the camera, and you get a swell story.
My Ratings: Average / 4

Jacob Keenum, age 20
Positive—Funny in parts, tragic in others. See this when you are strong emotionally, or if you want to see others that are worse off than yourself. Shows the tragedy of the modern American family than is too busy to love and care, sometimes until too late.
My Ratings: Better than Average / 4½

Bill Walters, age 58
Positive—It was a very good movie. It had however some beating and a little cussing, but nothing extremly offensive. It showed a beaten man, and him lying in a hospital bed (you can clearly see through the blanket). Kissing, and gun use, but otherwise than that, the movie was very good, and entertaining. A good spend.
My Ratings: Average / 4

Jesus Lover, age 30
Negative
Negative—…What drew me to this film was Justin Chatwin, who plays Nick. He was so good in “War of the Worlds.” The characters in Invisible, however, were about as interesting as a glass of flat Pepsi. What adds to this underwhelming film is the depressing weather shown as the movie takes place in the Northwest US. The plot was bland and predictable. I never fall asleep in movies, but I had to force myself to stay awake for this one. Invisible was just another attempt to do a “Sixth Sense” type M. Night Shyamalan movie. Save your money on this one.
My Ratings: Average / 2

Jeff, age 40
Comments from young people
Positive—I went to go see this movie with boyfriend and was a great movie. I love suspense movies, they have always caught my eye. This one has a great plot, and everything about it is good. It will scare the socks off you, but it’s a movie worth seeing I think.
My Ratings: Average / 5

Casey, age 17
Positive—I absolutely loved this movie! I went with a group of my girlfriends and we all enjoyed it! There were a couple of times the main character said shit, but other than that, it was pretty clean language-wise. There was one part were the guy was kissing his girlfriend on the bed, but they were clothed and it was only for a few seconds. I really thought this movie had a good moral at the end! I was crying the last five minutes of the movie! I would recommend this movie to ages 15 and above. Anyone younger might get frightened, for there were several violent scenes, and a few scenes talking about drug dealing. I would even recommend adults see it! This is a movie that, if I were to watch it with God, I would not be embarrassed. All in all, this was an amazing movie that I think people will really enjoy!
My Ratings: Better than Average / 5

Hannah, age 15
Positive—This movie was Amazing! But, it was much different than I expected. It was not a horror movie, like the previews made it seem like, it was mostly mystery, with some action, and a hint of romance. This movie is one of my favorites. It is clean (for a PG-13 movie, they said S*** once or twice, but they did say B**** once) There was minimal violence, mostly beating up (he is not brutally killed, he is beat) and barely ANY sexual content (him and his girlfriend kiss-passionatley for about 10 sec. and one of the girls gets out of bed with a guy, but nothing is shown, although it is hinted that they slept together, but that was it in the whole movie). The movie kept me on the edge of my seat. It was interesting, cute, and had the BEST ending!!! I would not recommened this movie to children under 13 (it is rated PG-13 for already listed reasons) but I would recommened it to ALL older teens and adults. It is well worth the money!
My Ratings: Better than Average / 4

Ally, age 15
Positive—I have been waiting to see this movie since December when I first saw the preview. I was so excited Friday to see it. I thought it was great, not very scary at all except when he gets beat up and people jump out. Only a couple of curse words, really funny, and only one kissing scene. It’s definitely one of my favorites, and worth your money. I would recommend it to anyone 13 or older. Great, great movie. …
My Ratings: Good / 5

Kathryn, age 13
Positive—I really liked it and thought that it was funny. I was happy that it wasn’t too serious, it is definitely one of my favorites.
My Ratings: Excellent! / 4½

Jonathan, age 13
Positive—This movie was a lot darker than I thought it would be. I took my little sister to see it and was a little uncomfortable during some of the more disturbing parts, but beyond that, I liked it. It was pretty violent, and it was a little freaky to see teenagers doing some of the stuff they did. It was not a very creative plot, but the acting was good and it kept me interested. I thought it was slightly unrealistic even without the ghostly main character. But it was entertaining, and if you don’t mind dark movies, you would enjoy it.
My Ratings: Average / 3

Brittney, age 16
Positive—this was a pretty good movie. I really liked all of it, and there weren’t many objectional parts in the movie. There was a part where you might think they are going to have sex, but they don’t, and there is little language and just a little violence. It was all around a good movie, although I think it appeals more to teenagers than adults.
My Ratings: Better than Average / 4