for some mild peril 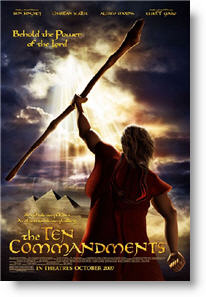 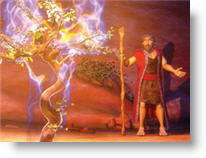 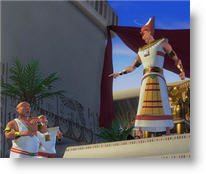 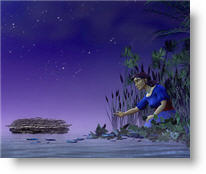 About Moses and the Israelites

The story of Moses (illustrated)

The man who wanted to see God (story for kids)

Details about Moses of the Bible (our WebBible Encyclopedia)

About the Ten Commandments of the Bible

Why followers of Christ should use The Ten Commandments in evangelism

Have you kept each of the Ten Commandments? Are you good enough to go to Heaven?

What does God expect of you?

“Behold the power of the Lord”

The story of the Ten Commandments has been filmed no less than eight times, not counting straight to video cartoons or educational videos. This, the latest rendition of the Ten Commandments, obviously has a lot to live up to. Some might even question if another version is needed, but anything which brings the Bible to young movie goers should not be dismissed out of hand. So does “The Ten Commandments” live up to “The Prince of Egypt” (one of my all time favorite movies) or even Cecil B. DeMille’s epic? Should it even be compared to those films?

“The Ten Commandments” already sparked some controversy over Disney’s censorship of the words “chosen by God” on the advertising posters. Fortunately, the film does not censor God. God is present throughout the film and showcases His relationship with Moses. Although the film is weak in a number of respects, the story of Moses and the Lord’s leading of His people out of Egypt remains powerful and emotional. Nevertheless, a fair review must highlight both the strengths and weaknesses of the film.

First is the issue of historical inaccuracies. The most obvious has been seen in seemingly every Moses movie ever made. The popular, but erroneous, notion that Ramses was the Pharaoh of the Exodus is largely harmless in the context of the movies, but potentially harmful to young children who may assume it to be true. A tactic of the Bible critic is to prove that no Exodus happened under Ramses, and thus imply the Biblical story is false, but in fact, the Biblical chronology (1 Kings 6:1) clearly makes the Exodus take place around 150 years before Ramses; probably under Amenhotep II. No where does the Bible say that Ramses was the Pharaoh, and the city of Ramses (which is mentioned) was build centuries before Ramses II.

A more important error which bothered me was the attempt to minimize the sins of Moses and Aaron. Obviously no one reading this is as righteous as Moses, nor Aaron. However, in revering the greatness of the Biblical characters we sometimes whitewash their sins, thus loosing valuable lessons. Consider that Moses was 80 years old when he led the Jews out of Egypt. I take this to prove that God spent 80 years molding Moses into the man we all know and love. Moses was not the same man when he was 20 as he was when he was 80. Nevertheless, the movie inserts unBiblical notions into the story in order to defend Moses and Aaron against the charges of sin. In this movie Moses acts in self defense when he kills the Egyptian guard. The guard does not recognize Moses as a prince of Egypt (and actually says he would not care anyway) and attacks Moses with a knife. Moses then kills the guard seemingly by accident as they struggle with the knife.

An even worse liberty is taken when Aaron is made to look innocent of forging the Golden Calf. In this version a man actually threatens to kill Aaron if he does not make a Golden Calf for them. Aaron prays God’s forgiveness even when performing the deed, but the Bible gives no indication of coersion of any kind. It is even said, “when Aaron saw this, he built an altar before it; and Aaron made a proclamation and said, ‘Tomorrow shall be a feast to the Lord.’” (Exodus 32:5). Thus it was Aaron’s idea to throw a feast before the idol. Once again, it look many years for God to mould Aaron into a righteous Priest. We lose sight of this when we minimize the sins of Moses and Aaron.

From a technical standpoint the cinematography was very nice, but the actual animation was so low grade that I felt as if I was watching a video game rather than an animated motion picture. This was really a shame, as the film might have look very impressive if the quality of the animation had been better.

Furthermore, I felt that the plagues were done almost in a montage form that left very little of an impression. One final criticism is the decision to make a “bad guy” character which represented all the sins of the Hebrew people. This was a poor choice, and he seemed like a caricature that was unconvincing and rather annoying.

On the positive side, the voice acting was good. The cinematography was very good, as was the design and artwork. The animation was not able to convey the artwork as well as it could, but the vision of what Egypt might have looked like and the interiors of the palace were all impressive.

On a nontechnical level, the film does occasionally evoke emotions. The Pharaoh was believable as a man who lost his son, and Moses was a truly humble character, which is sadly lacking from most other filmed versions of the Ten Commandments. I, for one, never cared for the brash and sometimes arrogant depiction of Moses in Cecil B DeMille’s version. Here I truly felt as if Moses was a humble godly man. Truly the Bible declares that “Moses was very humble, more than any man who was on the face of the Earth” (Numbers 12:3). Here finally is a Moses that I can believe matches that description.

Overall, “The Ten Commandments” lacks the technical prowess of “The Prince of Egypt” and takes too many liberties with the story. Portions of the story fly by in a matter of minutes, diminishing the impact of the story, but the story of Moses still evokes strong feelings and the actors do a good job of conveying the characters’ feelings and emotions. “The Ten Commandments” is a good film for youngsters, provided the parents explain what liberties were taken.

Morally there is nothing to object to, at all. The violence in the story is found in the Bible, and is not exploitive in nature. “The Ten Commandments” is no “Prince of Egypt,” but it doesn’t really need to be either.

Positive
Positive—This depiction is better, and more accurate, than the earlier “The Prince of Egypt” made by DreamWorks Productions. It largely remains faithful to the Biblical account (one exception: Pharaoh survives the collapse of the Red Sea). Also, more time is assigned to each of the plagues. One minor negative is that the film seems to want to copy portions of the Charlton Heston “The Ten Commandments” movie, with some scenes and dialogue bearing a remarkable resemblance. Overall, however, I encourage Christians to see this movie so that Hollywood will know that there is an audience for wholesome family fare.
My Ratings: Good / 3

David, age 43
Positive—We watched this movie as a family and enjoyed every aspect of the film from the story line,which was very accurate when compared to the Bible with the exception of minor areas, to it pointing out the people of Egypt’s lack of faith and God’s fulfillment of his judgment for not believing he is the one and only true GOD. This is by far the best children’s movies of this generation. It’s nice to finally see quality family entertainment in a children’s/family movie that doesn’t include the selfishness of today’s worldly views which show people coveting, lusting and worshiping of money. I only wished this movie was longer, and I plead for Christians to take a stand to only watch movies that are acceptable to God. I urge the Director and Producers to continue to make animated as well as regular movies of this quality A+/5.0. I think that people of this time and age can learn a lot about faith in our Lord Jesus through movies like this. Praise God, Thank you Jesus and may God bless the creators of this film.
My Ratings: Moral rating: Excellent! / Moviemaking quality: 4

Jacob Corona, age 11
Movie Critics
…3 stars (out of four)… Pre-adolescent kids would seem to be the ideal target audience, and the “Commandments” gets it right by neither pandering nor preaching—but presenting what is truly a remarkable story that has survived the millennia. …

Louis R. Carlozo, Chicago Tribune
…an entertaining story appropriate for the entire family that encourages the Christian principles of love, repentance, and faith. …

Movieguide
…doesn’t stick precisely to the original Exodus/Numbers script. But it doesn’t forsake it, either. …in terms of its heart, it’s as faithful as they come…

Paul Asay, Plugged In (Focus on the Family)
…a well-intentioned misfire featuring 3-D CGI animation that recalls lesser vidgames of the mid-1990s…

Joe Leydon, Variety
…occasionally stiff in both action and tone, nonetheless provides a reasonably good introduction to a vital piece of biblical history for children…