for strong bloody violence, pervasive language and some drug use 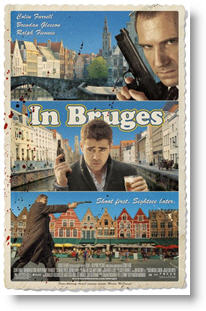 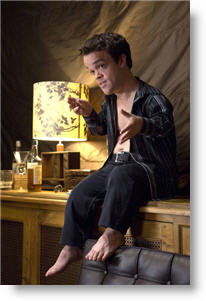 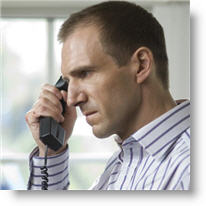 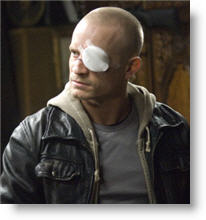 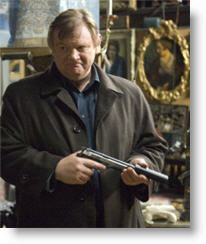 The next time you’re at a social gathering you might want to impress your friends with the answer to the question, “Where on Earth is Bruges?”. Because, unless you were a geography major in college, you probably have no idea where Bruges is either. Which is the same predicament that Ray (Colin Farrell) and his partner Ken (Brendan Gleason) find themselves in when they are sent to this little-known Belgium province to cool off after a hit has gone wrong.

Playwright Martin McDonogh, between writing plays, tells about visiting this small Belgium town and being caught up in its old-fashioned mystique. His split personality of finding the beauty in this quaint, little town and its nostalgic past contrasted with his proclivity of hanging out in its pubs. The town’s canals and bell-towers created a scenic backdrop for a world that he would place two new characters who each took on these contrasting characteristics.

Ray and Ken are professional hit-men, who are sent to Bruges after one of Ray’s bullets accidentally kills a small boy. The two wait in this quiet town for orders from their boss Henry (Ralph Fiennes) with instructions on their next assignment.

Ken convinces the reluctant Ray to go out and see the sights of this medieval town, when Ken would rather be drowning his sorrows in a pub. Ken spends time dealing with remorse from the consequences of his stray bullet. After a bit of sightseeing, the call finally comes in, and the assignment hits a little close to home for both men.

The film has a definite sense of a man trying to find redemption, while the forces of evil that bind him try to keep him bound. Set against the backdrop of this antique town, this struggle becomes all the more vivid as these modern hit-men try to find meaning for their lives in a town caught in the past.

The Bruges tourist department could not have gotten better publicity had they paid a company for the type of exposure this film will give to the providence and bolster tourism.

As with most films of the gangster genre, the film swims in profanity. Though the film isn’t a farce or a send-up of mob films, there are definitely some comedic moments, and Ray and Ken have more of a light approach to their line of work than the stereotypical hit-man. In one scene, a telegraph is delivered to Ken from Henry that is strewn with profanity, literally every other word in the letter is the f-word used as an adjective. This is done to distinguish Henry’s character, and every person that reads it, including Ken and Ray, comment on how foul-mouthed their boss is.

On top of the profanity, the violence is very graphic. In addition to the scene of Ray’s mistaken hit that gets them sent to Bruges, there are a number of shootings that are very graphically presented. The last sequence makes the final sequence of “There Will Be Blood” seem mild in comparison.

The characters spend many hours drinking, and there are scenes of pervasive drug use. There is also a scene where Ray is indulging in drugs with a “dwarf” (Ray's terminology for this character who plays a substantial roll in the film's subplot) and a couple of scantily clad prostitutes. Though there is no sex in the scene, it is rather suggestive, and the “dwarf” character spouts racist rhetoric about a future race war that will undoubtedly offend many viewers, which is no doubt what it is intended to do.

A smaller critique of the language has less to do with the four-letter variety, but with the accents of the characters. Like many movies set with Irish characters, at times the accents that these two men talk with get as thick as the ale they drink at the pubs. Many lines are hard to decipher because of the accents.

Though the performances by this stellar group of actors definitely make this film worth seeing, the level of violence and pervasive language makes it difficult to recommend. Those that are easily offended by violence and profanity would probably be advised to pass on the trip to “In Bruges” and check out previous works by Farrell, Fiennes and particularly some of the fine work of the under-appreciated Gleason.

Positive—I'm not sure how this film stacks up in the “Biblical” stakes—there's a lot of violence and profanity; it's not for those of a delicate disposition.

But—this film is more Christian in its own way than any other I've seen for a long time. It's all about the power and meaning of forgiveness, and about not being trapped in your sin. There's a moment in the first half of the film where Colin Farrell’s character weeps, asking how anything can ever be made right again in his life after the sins he's committed. The film is essentially an answer to that question, and that answer (though not mentioning Christ specifically) is that there is always space for redemption in a life, and that redemption comes through sacrifice, and the sacrifice is of a blameless victim.

Brendan Gleeson’s final scene with Ralph Fiennes is almost precisely a working out of Penal Substitutionary Atonement, retold in the terms of gangland retribution. I highly recommend this film to anyone who is not likely to be disturbed by the violence.
My Ratings: Moral rating: Average / Moviemaking quality: 4½

Toby, age 31
Positive—Okay, this movie is filled with f-bombs. There's even an extra on the DVD that shows you just how many. It's actually quite hilarious. I'm not a denominational christian. And I don't affiliate myself with any church or Christian, because I feel that my bond with Christ and God is my thing. Not anyone else's. On that note, this movie was hilarious! I found it in the action section, but it played out more like Ice Harvest in it's comedic seriousness. People die. People die brutally on camera in ways that made both my boyfriend and I close our eyes.

I agree with the guy above me, this was a very religious film. And “In Bruges” seems like it's actually all about purgatory and sin redemption. And everyone in this film has some wacked up honor code. This movie is great, if you're not easily offended and love great plots. …
My Ratings: Moral rating: Offensive / Moviemaking quality: 5