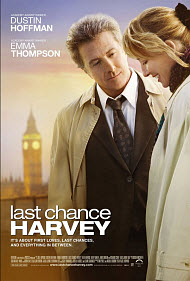 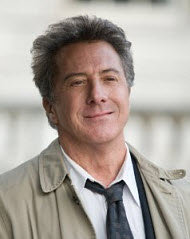 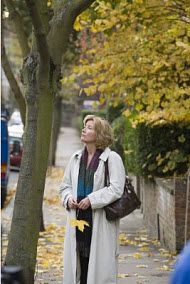 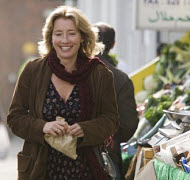 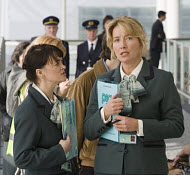 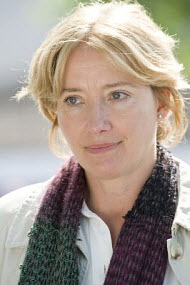 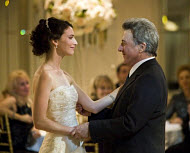 “It's never too late to fall in love.”

Harvey Shine (Dustin Hoffman) may, at first, seem like an ordinary man. He composes commercial jingles for a living, in an industry that seems to appreciate his particular style less and less. He gets word that the higher up's of his company may want to phase him out, just as he's headed to London to attend his daughter's wedding. Everything about Harvey, from the way he holds himself to the way he directs and speaks to others is sad.

Simultaneously, we are exposed to the story of Kate Walker (Emma Thompson). A single, native Londoner, Kate spends her working hours surveying disgruntled passengers at Heathrow International airport, while spending her down time providing companionship and care for her needy mother. In ways entirely different, Kate's life too seems sad.

Harvey and Kate meet quite by chance, after several near miss encounters. Harvey feels broken, as though he's lost everything. As for Kate, she's just resigned herself to accepting that disappointment (and perhaps loneliness) is her path in life. Neither of them expected love…

Although a love story, Last Chance Harvey is, more so, a tale of redemption. It is a beautifully unfolding story about love in all areas of life—be it towards our children, our parents, friends, romantic interests or even ex-spouses. In some ways it's about maturing in your circumstances, as unfair as life may sometimes feel, accepting your own short comings and responsibilities and make the right decisions anyway.

At one point, Kate mentions having an abortion some years back. The scene is brief, and not a central theme in the story line, but the emotion that she feels about it is still very raw and moving. This scene truly stood out to me. Even in the best of films, we seem to always remember that we are watching a movie with actors paid to portray a character. When those performers, however, seem to go further and portray an element of human depth in such an honest and candid way—it is hard not to pause and consider what that very situation must have been like. Such scenes evoke an empathy in us, regardless of how brief the scene may have been.

In poignant, honest and sometimes suitably comical ways, this film can find a way to touch it's audience and draw them in. It's been a very long time since I've seen a simple, and yet moving and altogether sweet movie put out by Hollywood. It's refreshing. Aside from a moderate amount of profanity (most of it involving one scene where the same word is said half a dozen times—and a brief reading from a creative writing piece which seems to be about sex,) this film is pretty inoffensive. In good conscience, I feel that, although not suitable (or interesting, for that matter) for children, I can recommend this beautiful story to anyone in the mood for a sweet and touching film.

Positive
Positive—It's somewhat amazing that this film was even made. It has the gentle pacing of a film from a couple of generations ago. Dustin Hoffman and Emma Thompson are top notch actors who give convincing, understated, sympathetic performances. The cinematography is beautiful. The worldview is purely romantic; however, God can be seen through the acts of love and kindness done by two suffering souls. “Last Chance Harvey” is an island in a sea of special effects, aliens and occultic themes. Congratulations to those who created this film.
My Ratings: Moral rating: Better than Average / Moviemaking quality: 5

Delbert, age 50 (USA)
Positive—What a delight to have an old-fashioned love story. I haven't seen anything like this for decades. Reminded me a little bit of the movie titled “Marty”—two lonely people who meet and start a friendship. It was just lovely and touching. Probably a little too slow for young people, but for adults, a positive film. I thoroughly enjoyed it.
My Ratings: Moral rating: Better than Average / Moviemaking quality: 4½

Halyna Barannik, age 62 (USA)
Positive—My husband and I watched this movie and really enjoyed it. The story unfolds, and you can feel the pain of being the “fifth wheel” for Harvey, as well as Kate, in both their separate circumstances. Anyone who has ever had the unhappy experience of feeling the “fifth wheel” will identify with it. You also feel the satisfaction later, when Harvey does the toast for his daughter.

I also agree with the critic, the brief mention of Kate’s long ago abortion stuck with you—you could feel her pain, regret, and her wondering “what might have been?” had she not chosen an abortion. It is a short conversation, but really sticks with you.

There is some light humor, a lot to identify with, if you have ever been left out, lost a job, or messed up—along with some “a ha” moments, when some things work out. A good movie. I highly recommend it.

There is some profanity, but it is light. Make sure you watch the credits, there is a small scene shown in the middle of them.
My Ratings: Moral rating: Better than Average / Moviemaking quality: 5

Becky, age 50 (USA)
Positive—The film was shot in London. I recognized many of the sites in the film from a recent visit to London. For me, that was where the realism ended. When I was in London, the streets were filled with Burqa clad females and men with Kafia headdress. In contrast, “Last Chance Harvey” was almost completely devoid of Muslims; the one exception being an out of focus Muslim woman close to the end of the film. I'd like to hear an explanation from the director.
My Ratings: Moral rating: Excellent! / Moviemaking quality: 4

Charles, age 53 (USA—Jew)
Positive—I truly enjoyed this character study. A beautiful story of redemption for these two characters, “Last Chance Harvey” tugs on the emotions and makes one ponder their own life circumstances in a new light. The lingering question is “What legacy will you leave behind?”
My Ratings: Moral rating: Better than Average / Moviemaking quality: 4½

Cheryl, age 31 (USA)
Positive—This movie should be listed as “better than average” because the Lord's name WAS NOT taken in vain. I ask all of you: how many movies are like this? Very few. So would you not conclude that this would make it “better than average.” All main reviewers should be informing the rest of us of this, but, alas all don't seem to see that this is one of the biggest deals for christians and for God (of course). This is the main reason we went to see this. I don't like chick flicks, and my wife doesn't like Dustin Hoffman, BUT we liked the movie. Good story. Good characters. Very clean (almost spotless) by today's standards. Good date movie.
My Ratings: Moral rating: Better than Average / Moviemaking quality: 4

Jay, age 35 (Canada)
Positive—This is one of the best movies I have ever seen. I do not often watch “romantic” movies, but Dustin Hoffman is one of my favorite actors, so I decided to give it a shot, at my sister's prodding. I was not disappointed.

Hoffman plays Harvey, a man who has really hit the wall. His job is ready to let him go, his ex-wife exiles him from his daughter's wedding party, and his daughter wants her step-father to give her away.

Harvey chances to meet Kate, who is also at her whit's end. Her mother is overbearing, she is alone in the world, and carrying a lot of emotional baggage from her past. They form an unlikely romance and it soon blooms to love as they help each other through their troubles, and together discover that there is really no such thing as a last chance.

I recommend this movie to young and old adults. The only questionable content is the brief strong language and drinking. It was relieving to see a movie that did not rely on sex as its backdrop, but focused on the depths of its characters. There is even a slight pro-life message within the movie. Please rent it and enjoy.
My Ratings: Moral rating: Average / Moviemaking quality: 5

Jacob Airey, age 20 (USA)
Positive—This movie was short, sweet, and lacked the two elements that seem to be prevalent in modern Hollywood films: endless cursing and sex. Harvey Shine (Dustin Hoffman) is an unsuccessful jingle writer who takes time off from his busy job to attend his daughter’s wedding in London. When he gets there, though, he finds out that 1) He never realized how well his ex-wife Jean and her new husband Brian fit together, 2) He’s an embarrassment not only to himself but to the rest of his family, and 3) That his daughter would rather have her stepfather Brian give her away than her own father. And to top it all off, he gets a phone call from his boss telling him that he’s basically fired.

So this poor guy goes to the airline bar after the wedding ceremony, electing to fly back to America instead of attending the wedding reception. While there, he meets a lonely statistician named Kate Walker (Emma Thompson), who just spent the previous night at a bar with people at least ten or fifteen years her juniors, trying to gather her courage to develop a relationship with a stranger. So they get to talking, and eventually develop a sweet little connection with each other.

I liked this movie for several reasons. First of all, minimal cussing and absolutely no sex. Secondly, it portrayed Harvey and Kate’s relationship as developing in a slow and cautious manner, instead of the one-minute-we-meet-and-the-next-we-jump-into-bed-together theme that is so rampant in Hollywood nowadays. And thirdly, they chose a cast that brought the tender little tale to life. A wonderful movie, and at only one hour and thirty-three minutes, certainly not a waste of time. I highly recommend this film.
My Ratings: Moral rating: Better than Average / Moviemaking quality: 4

Kathryn, age 22 (USA)
Negative
Negative—The one positive note of this movie is that it paints an accurate picture of the awkward social situations that inevitably result from divorce, yet are never really thought out by couples considering divorce. Having had the bride's parents, the groom's parents, and the groom's other parents at my own wedding, I could relate to the uneasiness experienced by everyone during the wedding scenes. Apart from that, though, the film has little to offer.

The plot is predictable and implausible at the same time. I love Dustin Hoffman and Emma Thompson both as actors, but there is absolutely no on-screen chemistry between them in this film. Hoffman's character, Harvey, comes across almost stalker-like in his pursuit of Thompson's Kate; my wife and I both found this somewhat annoying and kept wondering why Kate didn't just tell Harvey good-bye for good. Kate, for her own part, comes across as a person with no ability to say “no” to anyone—a complete pushover.

The protagonists are both damaged goods, pitiable rather than lovable, and we just couldn't buy into their redemption story at all—perhaps in part because it was all supposed to have happened in a credulity-stretching three days. A sappy, sentimental musical score didn't help matters, either. My wife and I both enjoy a good romantic movie, the key word here being 'good'. This one isn't—save your money.
My Ratings: Moral rating: Average / Moviemaking quality: 3