for some mature thematic elements 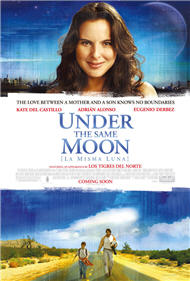 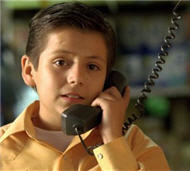 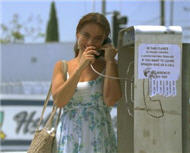 Those who are old enough to remember back to the late 70’s and early 80’s may have nostalgic recollections of the ABC “After-School Specials.” These programs were well-intended shows that targeted adolescent and teen viewers through stories that dealt with relevant teen topics. Usually the story lead to an ending that went along with the message the program was meant to impart. Just like the series of after-school specials, “La Misma Luna/Under the Same Moon” is well intentioned, has some sincere feel-good moments, but is overall lacking in substance.

Now, let me state, that this film will probably (and by comments I have read so far, has already started to) polarize many audience members, but not for the reasons one might expect. Though the film does deal with the issue of “illegal immigration,” the film is careful to never take a stand on the issue and makes a point to downplay the whole debate. The element of the film that will probably make audiences take sides is the emotional payoff this film tries hard to deliver. For some, this may be a legitimate “tear-jerker” for others, and I would contend most audience members, this film is more sap than true sentiment.

The film follows a nine year-old boy Carlitos (Adrian Alonso) who lives with his grandmother in Mexico while his mom (Kate del Castillo) supports him by sending him money and gifts while working in Los Angeles. There is never any doubt that she loves her son and has regret about being separated from him; she is doing what she feels she has to do in order to make their lives better. When Carlitos grandmother passes on, leaving him by himself, he decides that he has to go and be with his mother.

Equipped only with a visual description of an East-LA street corner that his mom has described to him each Sunday she calls him, he sets out on his adventure to cross the border and find his mom in a distant land.

In the midst of his journey he attaches himself to fellow migrant traveler, Enrique (Eugenio Derbez), who is hitch-hiking to Los Angeles. Though at first Enrique wants nothing to do with the kid who he compares to a way-ward mutt, he realizes that Carlitos will be eaten alive if left on his own. Derbez’s (best known as the voice of “Donkey” in the Spanish version of “Shrek 2”) performance is one of the highlights of the film.

Ok, first what the film has going for it. The film does a good job in conveying the lengths that a mother will go to for the love of her son, and vice-versa the journey a son must travel to find his mother. Overall, the performances of the main cast are fine, and Alonso does an adequate job in conveying the range of emotions that Carlitos goes through for a boy who has been through a life time of challenges at merely nine years. As mentioned, Enrique is definitely the heart of the piece and his character added comedic elements to the drama that became a bit heavy-handed at times. Some of the performances by the periphery characters were flat and seemed like performances of those by close friends or relatives rather than those when a casting agent is involved.

It is also hard to argue the non-offensive nature of the film as there is relatively little profanity. There are a handful of “curse” words, most of which are only slightly offensive. As Carlitos and his relationships are the center of the film there is no sexual dialogue nor violence. The thematic element of “illegal immigration” and smuggling living people across the Mexico border is dealt with, but is more circumstantial than a driving force of the film’s plot.

The biggest problem I had with this film was the flatness of many of the characters outside of the relationship between Carlitos, Enrique and his mom, Rosario. Many of these characters were nothing more than poorly developed stereotypes who are merely on the screen to present conflict to the main characters. How many times have we seen a character like the unsympathetic, rich, white woman who only speaks to Rosario in a condescending manner to berate her and set up the inevitable next series of problems that she will have to struggle against. I know, these type of people exist, but she could have at least been drawn better than the tattoos on the forehead of the film’s stereotype “gangster.”

Now I have no doubt that this film will probably find an audience that swoons over it, and will read this review and label me as “lacking emotion” or perhaps “insensitive,” maybe even “heartless.” However, there have been countless films that have dealt with adolescents going through similar situations and have portrayed these feelings and emotions in a more convincing manner than the ones that are delivered by this film. Two films that deal with conveying heart-felt emotions in a far superior manner are “Akeelah and The Bee” and the 1997 Iranian film “Children of Heaven.” A film that covers similar terrain, but was done far more effectively is Walter Salles’ 1998 independent masterpiece “Central Station.”

So though “La Misma Luna” wasn’t my cup of tea, you may find it tugging on your heart-strings.

The film is primarily in Spanish with English subtitles. The film is rated PG-13 and has a running time of 109 minutes.

Violence: None / Profanity: Minor / Sex/Nudity: None