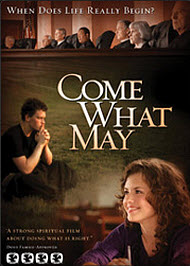 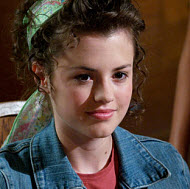 What about feminism and women’s lib? 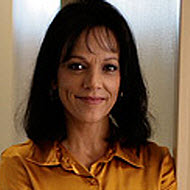 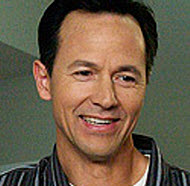 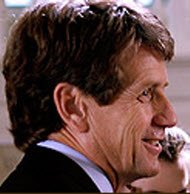 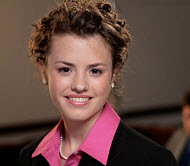 “The judges are stacked against them, but the greatest debate will happen before they ever enter the courtroom.”

Here’s what the distributor says about their film: “‘For you created my inmost being; you knit me together in my mother’s womb’ (Psalm 139:13).

With his mother a lawyer and his father a professor, Caleb Hogan has grown up understanding the importance of stating his case, backing it with facts, and choosing what’s right… Come What May.

This ability has served him well in his internship at his mother’s law firm and it has guided him to the college with the best Moot Court team. But has it prepared him to deal with the collision-course elements of the most important legal issue of our time?

When does life really begin?

Coming face-to-face with the realities and legalities of the abortion issue—both in preparation for the National Moot Court championship and as his mother prepares to argue a high-profile case before the Supreme Court—Caleb must decide what he truly believes.

Wherever he lands will have consequences. If he takes the pro-life argument, he stands to lose the most important competition of his life—and the support of his mother. If he follows his mother’s lead, he could win the coveted title… but lose the heart of his teammate Rachel in the process.

Along with her professor and classmates, Rachel not only understands the strength of the pro-life arguments, she believes them to her core. Life, from its beginning, exists to honor God. For Rachel, that plays out in her Moot Court arguments and in her daily life.

Can Caleb find that same conviction? Can he win the heart of Rachel in the process? While compromise might be the easiest solution, it could also be the most dangerous.

‘Come What May’ is a reminder that choosing what’s right is never easy… but it’s always worth the cost.”

Positive
Positive—This movie is a great teaching tool for parents and kids. From the father/son discussion in the batting cages to the budding relationship between Caleb and Rachel, there are plenty of things that make this a worthwhile movie. While the technical aspects of the movie are not worthy of Oscar contention, the message far overshadows the technical negatives. The lead actors/actresses are far more believeable as real people than those that Hollywood churns out on a regular basis.

Topics that stand out in a positive way: Honesty, Integrity, Dating, and Marriage. I particularly enjoy Rachel’s stand for purity in her relationship with Caleb. Not riding in the same car alone. Not holding hands. That is some great stuff that teenagers need to “get” and not something they are getting in the media these days. While the husband and wife have issues in their marriage, they are committed to making it work. We need more movies like this!
My Ratings: Moral rating: Excellent! / Moviemaking quality: 3

Michael, age 44 (USA)
Positive—This is a must see movie for everyone! It has solid biblical facts and a touching story. Although it is a very controversial issue of abortion, it tells the facts from a Christian standpoint. Very Good movie.
My Ratings: Moral rating: Good / Moviemaking quality: 4

Dana, age 37 (USA)
Negative
Negative—The issue of abortion is always controversial. Ever since its inception in 1973, it is been the target of religious group and advocates everywhere. Flash forward 30 years later, a movie has been made by Christian groups regarding the issue. It’s something that you’ll find in church sermon on Sunday morning, why they produce a 92-minute movie to force the subject down our throats is another matter. It bypassed theaters and went straight to video route, which is good because, I hate to say this on a Christian movie review, but this one narrowly escaped Razzie consideration. This movie is also a horrible excuse for naming the movie off a song from “Moulin Rouge”.

“Come What May” plays out more like a Lifetime movie-of-the-week than an actual movie. It’s about as cheaply produced as cardboard, as so are the one-dimension characters whom we care nothing about. The cast is mostly made up of newcomers who have no prior acting experience, and shows that they should go back to their day job (whatever it may entail). See all »

Caleb Hogan (Austin Kearney) is a promising young man who wants to become a lawyer, and he also dreams of getting into the prestigous Patrick Henry College. While his father (Kenny Jezek) agrees, his mother (Karen Jezek) isn’t fully convinced. She agrees, only paying for the first year unless he wins the Moot Court Championship. The debate topic is to overturn Roe v Wade, and Caleb’s debate partner is Rachel (Victoria Emmons; who mirrors resemblance toward Heather Lagenkamp from the original “Nightmare on Elm Street”). Rachel and Caleb immediately grow attached to each other, although Rachel isn’t ready to accept Caleb as a boyfriend until she’s ready for a relationship. A minor subplot also deals with the fact that Caleb’s parents haven’t been seeing eye to eye lately, and to top it off, Caleb’s mother is chosen to be the opponent factor in the debate.

While some Christians will like this movie and its powerful lessons on trust, relationship, and life, it will not be a movie for everyone. Shot on digital camera, the movie is poorly constructed, has several gaping plot holes, and the dialogue is very poor as is the wooden acting job. I do believe children are a child of God and life is to be taken for granted, but I also believe not all are ready to become the overbearing responsibility of motherhood quite yet, however this is a fight that belongs in mainstream courtrooms. Films like “The Passion of the Christ” and “Saving God” I show sympathy for, but it is when the film becomes too overly preachy (i.e. “Left Behind” series, “Fireproof”) on its core message that the film drags on and becomes boring. After this movie, my boredom turned to tiredness.

Violence: None / Profanity: None / Sex/Nudity: None
My Ratings: Moral rating: Excellent! / Moviemaking quality: 1