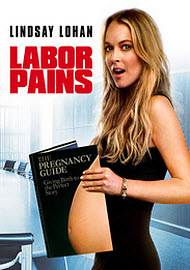 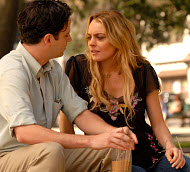 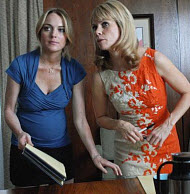 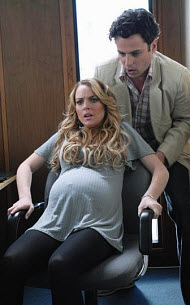 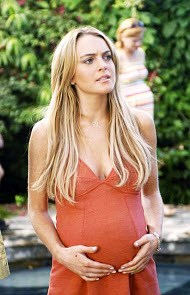 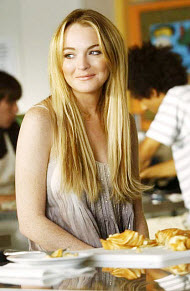 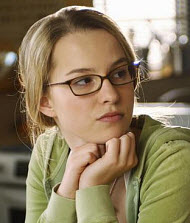 “Some stories keep on growing.”

Thea, played by Lindsay Lohan, is a young adult forced to give up all her dreams. She had to quit college to care for her younger sister after both their parents died. She is working at a dead end job as a secretary in a publishing firm for a boss (Jerry, played by Chris Parnell) that is rude, demeaning and obnoxious. She is behind on the rent and is dating a man who doesn’t see the need for responsibility. Life for Thea stinks, until she lies about being pregnant. When Thea is about to be fired, she tells Jerry she is pregnant in order to keep her job.

Thea is now forced to pretend to be pregnant for awhile, however, as time goes on, instead of pretending a miscarriage, Thea continues with the pregnancy. She likes all the good things that have happened in her life since she “became pregnant,” including her promotion and relationship with Nick (Luke Kirby), who happens to be Jerry’s brother. She also likes how people treat her now that she is pregnant. Eventually, things begin to unravel for Thea.

Negative Content: I was surprised how little bad language was in this film, because it did receive a PG-13 rating. Skank, Oh My G-d, A-s, are just some of the words used in this film, along with phrases like “do the nasty” and “knocked up.” However, the PG-13 rating was probably due to the absurd scenes that were far too sexual. In an office setting, a man gyrates with his hips and comments that Thea’s boyfriend is a “very lucky guy.” In a birthing class, the instructor asks for a male volunteer to help her demonstrate a position for easing labor pains. She is on all fours and has him hold her from behind and begins rocking. She makes it into a sexual encounter with the man, as his wife and birthing class watch. This scene was not funny and was extremely awkward.

In addition, Thea is a compulsive liar. She lies to her landlord, her boss, her sister, etc. These lies make it possible for the viewer to believe she could lie about being pregnant. As the “pregnancy” progresses, Thea is forced to tell bigger lies to cover other lies.

Thea and her friend are often seen smoking. Thea is also seen drinking on several occasions.

There is a scene where Thea and her sister are fighting over the pregnancy belly. They are seen rolling around on the floor, hitting and kicking. Thea also wears very low cut tops and short skirts (typical Lindsay Lohan attire).

Positive Content: Thea has been taking care of her sister since their mom and dad died. She views this as an important responsibility. She is not angry or bitter about life or the hand she has been dealt; she just accepts that things are what they are. This is a nice change from the typical movie which portrays life events as some horrible injustice.

Motherhood is portrayed in a very positive light in this movie, and although, Thea is not really pregnant, she begins to make life changes that would be healthy for a pregnancy, such as giving up smoking and drinking, taking prenatal vitamins, etc.

Lindsay eventually has to “give up” the act and accept the consequences of her lies and deceit. Eventually, all of us are forced to do the same. We will all be held accountable. 1 Peter 4:5 says “But they will have to give account to Him who is ready to judge the living and the dead”.

While this movie had some likeable moments, it was far too predictable. In addition, for a comedy, there were too few laughs and too many moments where I just sat and wondered what the producers were thinking. This movie was released straight to DVD for a reason—it is a mediocre movie. Although, it had a likeable storyline, it was slow and not funny.

Would I recommend this movie?—Not really. However, if you are truly bored and decide to rent a movie, and your first 20 choices are not available, this might be an option. I would, also, expect a true Lindsay Lohan fan to enjoy this film, as well as many teenage girls.