for cultural and maternal nudity throughout. 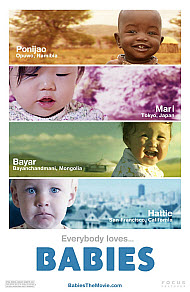 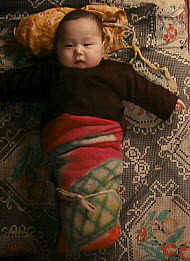 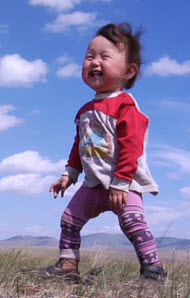 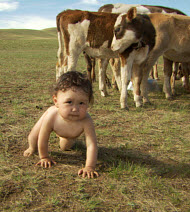 Have questions about life before birth, or a woman’s choice about pregnancy and abortion? Visit this beautiful online presentation. Ask questions. 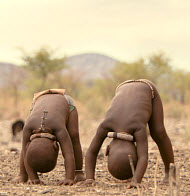 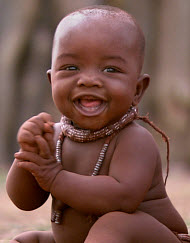 “Babies” is an accomplished documentary that focuses on exactly what the title suggests: babies. There is no narration, subtitles, or product placements. Even the parents take a backseat as the primary focus remains on how these four brand-new children journey through their first year of life in their given countries.

Excellently shot by Thomas Balmes, we are shown two babies from poorer countries: Ponijao from Namibia, and Bayar from Mongolia. These two are fascinated with what little they have, venturing boldly around dogs, cattle, and goats. They find toys in the simplest of things, such as toilet paper and a dog’s tongue. From the more developed countries is Mari from Japan and Hattie from California. These parents give their children expensive gadgets, academic toys, and classes to help them mentally excel.

Finding this film entertaining truly depends on whether you find enjoyment in watching a baby’s exploration of his world. “Babies” closely follows as the four grow from newborns to adventurous toddlers. As the documentary progresses, an interesting contrast begins to emerge as the audience witnesses how the babies, from opposite ends of the world, entertain themselves. The more developed countries tend to be weary of germs and feel the need to attend baby groups and begin academics early. While the lesser developed countries are extremely poor, their babies appear just as happy and even more adventurous since they’re allowed to roam more freely. Balmes’ excellent direction allows these differences to appear naturally without the sway of a biased narration.

I found no objectionable content in the documentary. However, whether or not, one finds offense in the film depends on their convictions. There’s a lot of maternal nudity in the film. There are several scenes of breastfeeding and the mothers lying unclothed (only breasts shown) with their children. While I find this completely natural, some might feel uncomfortable. The Namibian tribal women regularly walk around topless. Several young children are shown to be wearing little or no clothing, as well. Children’s mischievousness is recorded and shown; some are shown dragging cats around and making their siblings cry. While there’s hardly any dialogue, there is one scene where Hattie’s parents take her to some sort of New Age group where they have a sing along about Mother Earth taking care of them. However, in a humorous, truthful moment, Hattie bolts to the door and attempts to leave.

I recommend “Babies.” If you’re into documentaries or even just love babies for their curious nature, I feel you might thoroughly enjoy the film. While the first part feels a little slow, the film becomes quite enjoyable once the children’s personalities begin to shine as they all interact differently with their unique surroundings. It was the first film in a very long time where I did not feel any spiritual guilt by being entertained. “Babies” helps show just how miraculous of a creation babies are and how much of a blessing they are as stated in Psalm 127:3:

“Behold, children are a heritage from the Lord,
The fruit of the womb is a reward.”

Positive
Positive—This was a beautiful film. I feel sorry for anyone who is offended because people in another part of the world do not live, dress, parent the way most in the United States do. This film is about how babies in different locations around the world go through the very same growth stages. I found the film to be beautiful and engaging.
My Ratings: Moral rating: Excellent! / Moviemaking quality: 5

CA, age 64 (USA)
Positive—My friend and I saw this film for the simple fact that we LOVE babies. The film quality and cinematography was very well done. It was creatively and artfully presented without interference from subtitles, narration or captions. You simply sat back and enjoyed watching these little blessings grow through their first year of life.

It was interesting to see how the different cultures chose to raise their children. Some of the material concerning maternal nudity could be deemed as offensive by some Christians who are completely against any form of immodesty. However, I found it to be a natural potrayal of motherhood at its finest without any censorship. Naked children are potrayed often, but it is, once again, a natural depiction of early childhood.

I would reccomend this film to any. There is a depiction of the New Age chant, but as you will find out, the little girl involved was not too excited about it herself. You coo and laugh at all of their little antics and makes you appreciate the little steps they take all the more. Go and see this movie, it is absolutely precious…
My Ratings: Moral rating: Excellent! / Moviemaking quality: 5

Chelsey, age 18 (USA)
Positive—I just wanted to add that the soundtrack is magical. It also finally answered a question I’d always wondered about: “What do parents do in third world countries without diapers available?” This is on my DVD wish list! (And I want to reassure those concerned about nudity that the breast-feeding is in no way sensual, but rather utilitarian.)
My Ratings: Moral rating: Excellent! / Moviemaking quality: 5

Angela, age 48 (France)
Neutral
Neutral—As myself and my husband excitedly sat down to watch the Babies movie, we also were taken back a bit. When the first scene of breastfeeding came on, my husband quickly turned his head away. He asked me, “Is it okay if I watch this?” I kind of shook my head and shrugged my shoulders. I wasn’t sure, either. Basically the “objectionable” content of the movie are the parts were babies are being breast feed, and the whole breasts of the mothers are in view.

Of course, as the babies become older the breastfeeding scenes become less and less, however, the african babies scene are usually showing the mothers topless as that is their culture. My husband I both actually enjoyed watching the movie—it’s fun to watch the children grow and learn. However, for my sake my husband did look away each time the mothers breasts were in view. The camera didn’t avoid showing the whole process—i.e., some movies show a mother feeding her child with a blanket around their top.

Also, think of it this way: would your husband be watching a mother breastfeeding in church or other public place if the mother didn’t cover up? Just because it’s on screen does not mean lets go ahead and view it all. My husband chose to look away on those parts of the movie (by the way, they also show the American mother in the hot tub with her baby, both are naked)—and if you would like to enjoy the movie I recommend the same, be prepared to look away for at least a good chunk of the film.
My Ratings: Moral rating: Better than Average / Moviemaking quality: 4½

Jenny, age 29 (USA)
Negative
Negative—I walked out of this film because I saw babies eating garbage, and there were a lot of bare breasts.
My Ratings: Moral rating: Extremely Offensive / Moviemaking quality: 1

Evan Land, age 30 (USA)
Comments from non-viewers
Neutral—I have not seen the movie yet but a friend did recommend it. As a mother of 3, I smile when I see a child nursing, even in public. It is a beautiful thing. The look of love a mother receives from her child while nursing is so awesome. Yes, we cover up here when we nurse in public, but we are a different culture. And, even in our culture, breastfeeding can be seen as gross by some who don’t understand it. It is God’s intended way to feed our babies (there was no Similac® when Eve gave birth), and it is beautiful. Anyone who can carry around a cup of coffee in public or eat in public can stand to let a baby nurse. Watching a movie about babies from other countries… well there should be no surprise that the women would be topless.