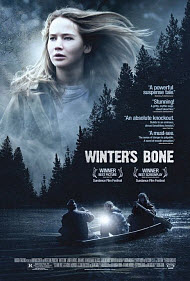 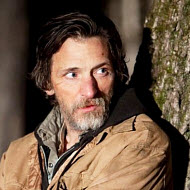 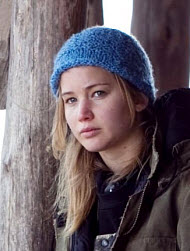 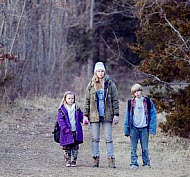 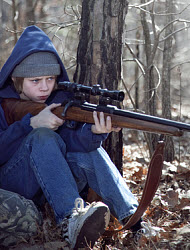 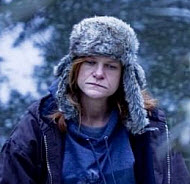 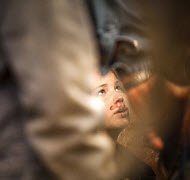 Let’s just get right down to the nitty gritty, shall we? Here’s what Christians will find the most offensive about this movie: the language. There are some bad words, including at least one use of GD, but I don’t recall Christ’s name ever being taken in vain.

There’s some violence, too. A teenaged girl gets beat up pretty bad (that’s not a spoiler, don’t worry.) But the big question here is: Why does she get beat up?

To start at the beginning: Seventeen-year-old Ree Dolly lives in a rundown house with her two younger siblings and a mother who is slipping into an ever-worsening form of dementia. Ree’s the one who looks after the house: cooking the meals, getting the kids off to school, etc. One day, the sheriff shows up on the doorstep and informs Ree that her father missed his court date. The worse problem: He put the family’s house up as bail. So if he doesn’t turn up for his next court date, the house becomes the property of the state.

So Ree sets out to find her father. She talks to lots of people—backwoods people, I suppose. Most of them seem to be getting by, but only because they have their thumbs in a few illegal pies. They could help Ree, but leading her to her father could also land them in some pretty big trouble, too.

If you can get past the language, which is very tame by many movie standards, “Winter’s Bone” is a very good movie. Its opening scenes depict a very bleak world… somewhere in the Midwest in either late fall or early spring. The leaves are off the trees, the scenery is lifeless, the world is washed of color. No one smiles in this movie, because no one, except for the young kids, has much reason to smile. The kids are happy, because they’re too young to fall into that trap that happiness = a whole lot of material possessions. We come to realize that these two kids are really what Ree is fighting for.

“Winter’s Bone” is a good morality tale. It reminds us that love always demands sacrifices.

Positive
Positive—I’m glad I went to this show, for it was a well made movie that intrigued me the whole way through, but it is a gloomy, raw movie. Don’t select this for a first date or if there is the need for a “feel-good” ending. It’s somber the whole way through. You’ll leave the theatre with lots to think about.

The story is believable and worth seeing.

The acting and story line are excellent. In my small town over the last few years, my church has made a push to reach the crowd “across the tracks”. While this is totally Biblical and good, it has placed some in my church, myself particularly, in the lives of some very poor people in America.

I’d have passed the movie off as sensational a few years ago. Now with my experience “across the tracks”, I’d say this movie depicts families where hopelessness prevails and where Christians need to minister. While all the situations seen in this movie are not seen in every poor home in America, the general feelings of hopelessness and despair is beautifully depicted in “Winter’s Bone.”

I’m a deeply committed Christian that is totally against horror, sexual promiscuity, and most violence. However, this movie is one of the few “R” rated films that may actually be good for mature Christians to see, especially as it may spur some to Christian action. Again… gloomy, raw, and real while at the same time emotionally moving, powerful, and arguably, important. I recommend it, but only for adults and in the right situation.
My Ratings: Moral rating: Offensive / Moviemaking quality: 4½

Joe, age 42 (USA)
Positive—How can Christians rooted in a tradition from the kind of place depicted in this film see this and only seem to care about the cussing, and not be hashing over what this film has to say? This is a film about family values and traditions, where people survive in hardscrabble rural poverty. Some of these are good and some are not so good.

Families are kept together at all costs (even when the husband is abusive), the law is not to be talked to, disputes are settled by violence, and skills of raising animals, shooting game and spelling are passed on by older siblings. A kindly neighbor sees to it that a family being raised by a teenage sister has food, wood and animals cared for. Multigenerational musicians play traditional bluegrass songs while others play cards. Only a kid’s trampoline and the fancy cars of outsiders make this life any different than it could have been a hundred years ago. Drug dealing and the military seem to be the only career options to subsistence farming.

The young heroine is brave, plain spoken, resourceful, dedicated to her family and to the code that avoids the law, as she sets off to save the family homestead. The film does make these rural areas and the people who live there seem very scary, and you may not want to go for a long hike in the Ozarks or Appalachia after seeing this film.

The addicted, violent uncle “Teardrop” is another complex character with strong family values who is both threat and protecter. Christianity does not play much of a visible role other than the hymn “Further Along” being sung during the credits, although we see a good amount of Christian behavior by various characters. We expect the church to be a part of life in this community, as well as elsewhere, and may ask what influence it is having.
My Ratings: Moral rating: Better than Average / Moviemaking quality: 4½

Stanley Hirtle, age 65 (USA)
Positive—This movie deserves its R rating: it contains profanity (I don’t have an exact number, but at least ten f-words) and disturbing violence—Though the violence is handled discreetly, and not in an in-your-face sort of way. That being said… although it’s hard to watch at times, this is a beautifully made film about a heroine who doesn’t need to have superpowers or blow away baddies with a machine gun. A refreshing difference from today’s usual fare (not that I don’t like that sort of thing, too… I can’t wait to see Jennifer Lawrence kick butt as Katniss Everdeen in the upcoming “Hunger Games” movies).
My Ratings: Moral rating: Average / Moviemaking quality: 5

Gabby Browning, age 18 (USA)
Positive—I watched this film last year and found it to be very realistic. It was filmed nearby (I live in the Ozarks), and many of the characters in the film could be people I knew in high school. Life in rural America can be very hard, and the disappearance of manufacturing jobs has had a profound impact on many people. The film depicts real people struggling with real life issues. I have had family members addicted to meth, and I know of other family members who have cooked meth. The impact meth has had in this part of the country has been pretty devastating.

Yes, the language is raw at times but that is how many of these people speak and to be honest, it’s just very authentic. It’s certainly not an uplifting tale, but I think it is an important film to view. It’s certainly not one you watch and then five days later can’t remember anything about it. See all »
As believers, we are called to be salt and light. And not just to the clean, prosperous, nice smelling people with whom we work and next to whom we live. I think every American should watch this film, but I would be pleased if only every Christian in America watched it.
My Ratings: Moral rating: Offensive / Moviemaking quality: 5

Joe, age 50 (USA)
Negative
Negative—This film is dark, depressing, and dismal. I wish I could remove it from my heart and mind, especially the sick scene where the main character assisted in removing her father’s hands from his dead body via a chain saw. I deem it extremely offensive, not because it is full of profanity or sex but because it is a complete waste of time and offensive to the soul. As far a “filmmaking quality,” it’s not even in the same league as many quality films that come to mind.
My Ratings: Moral rating: Extremely Offensive / Moviemaking quality: 2½

Greg Terra, age 45 (USA)
Comments from young people
Positive—…“Winter’s Bone” is a near perfect directional piece, with a good script, and some very good performances. I was happy to not be overloaded with profanity, also, that one time God’s name may have been misused was not even as an exclamation “GD you;” I would have been happier without it though. Overall, a very interesting look at rural America, and poverty. Some moments are very chilling, so don’t bring kids.
My Ratings: Moral rating: Average / Moviemaking quality: 4½