for intense sequences of violence, action and destruction, and for language. 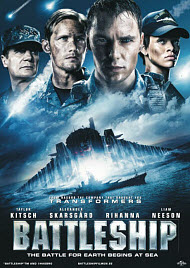 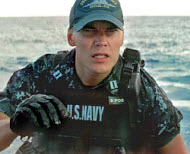 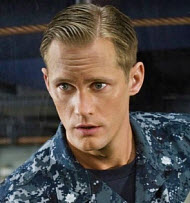 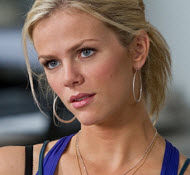 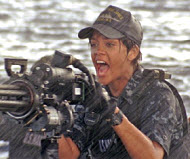 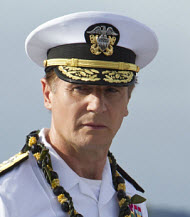 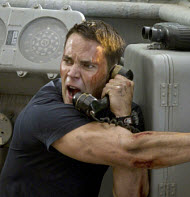 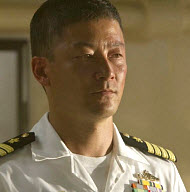 ships in the Bible

How will the end of the world really come?

“the battle for Earth begins at sea”

Alex Hooper (Taylor Kitsch) has no job, no money, and no goal in life. His brother, Stone Hopper (Alexander Skarsgård), a commander in the Navy, repeatedly tries to get him to take some responsibility for himself, but Alex has no interest in anything other than trying to pick up girls at the bar. So, in an attempt to get him to straighten up, Stone enlists him, and the next thing Alex knows, he is on a battleship in Hawaii, preparing to participate in a series of exercises at sea. Unfortunately, even there, Alex is headstrong, disobedient, and reckless, even catching (negative) attention from Admiral Shane (Liam Neeson, being his usual excellent self) who warns him that his career in the Navy is in serious danger of being very short-lived.

In the meantime, NASA has sent transmissions to an alien planet which they believe may sustain life. “If there is intelligence life out there, and it comes here, it will be just like Columbus and the Indians, except we’re the Indians,” warns a scientist, but eager to communicate with extra-terrestrial life, the government doesn’t heed him. The response is not what they expect, and before you can say “I sunk your battleship,” five alien ships have plummeted through Earth’s atmosphere. Some of them crash into Hong Kong, leaving the city in ruins. Others come down in the Pacific Ocean, conveniently close to the battleship exercises. Suddenly, Alex Hooper and his fellow soldiers find themselves in the midst of a war between man and alien, a war for the ownership of the Earth.

“Battleship” invites comparisons to “Transformers,” in that both share a similar style of action and both are based on Hasbro toys, but “Battleship” succeeds where “Transformers” failed—by giving us human characters that aren’t annoying and that we actually care about, Alex in particular. He starts out an aimless, foolhardy young man. His brother, who admirably looks out for his well being, admonishes him: “Who can I call to teach you humility? You have so much potential.” That potential comes to light when Alex is forced into a position of leadership. He steps forward and bravely faces down massive adversaries. When revenge blinds him and causes him to put the lives of his men at risk, he is forced to put aside selfish motives and put others before himself. In the end, he uses his skills, his cleverness and his loyalty to his mission to rise up as a leader and a man worthy of respect.

Other characters are equally admirable. Soldiers, time and time again, put their lives on the line and work together as a team to protect their country and, ultimately, the world. Indeed, self-sacrifice, courage, and honor are all traits that are positively portrayed. Nods to veterans, both past and present, are also welcome. Alex’s girlfriend, Sam (Brooklyn Decker) is a physical therapist who desires to help wounded veterans recover. Although it is implied that they have a sexual relationship, marriage is lauded, as Alex plans to marry her and even ask her father for permission, beforehand.

“Battleship” does have content issues. Sam, showing a lot of cleavage in a bikini, makes out with Alex on the beach. Language includes multiple abuses of God’s name (OMG—5, “My G_d” 2, “G-d_mn” 1), several uses of the s-word and three f-words (two unfinished). Most of the violence is extremely explosive mayhem, including clashes between battleships and spaceships, airplanes and spaceships, helicopters and… , well, you pretty much get the idea. The body count is very high, although little blood is seen, although when the aliens disembark, the violence becomes more physical and one-on-one and some characters to end up with bloodied faces.

However, in the end, “Battleship” is a better film than it has any right to be. The action is fast, furious and largely bloodless. The special effects are phenomenal. The actors are all strong, with Kitsch making a much better Navy soldier than he did as John Carter, earlier this year. Sure, the screenplay is clichéd, and the story is basically there to hang action scenes on, but do we expect anything more from a summer blockbuster? At least there is a story with positive character role models. Furthermore, nods to the board game on which it is based are very impressively used, right down to the hit-or-miss tactic and the use of numbers and letters. So, with the above content issues in mind, “Battleship” gets my recommendation.

Positive
Positive—This movie was interesting and entertaining. The only comment I really have is who actually had the guts to say let’s make of movie based on a two player board game and actually pull it off? Risk anyone?… Halo?
My Ratings: Moral rating: Good / Moviemaking quality: 3½

Jeremy, age 26 (USA)
Positive—Great movie! Don’t understand all the negative reviews. If you want to see an action movie, that has some intense moments, with a great patriotic quality, and a movie that somehow finds a way to weave into the plot a way to honor our war veterans, and if you want to see a movie with a great sense of heroism by a several characters and a touch of humor… this is the movie for you. I went on a date with my wife, we both loved it loved it so much that I took my 3 sons (ages 16, 14 and 12) the next day, since school just got out for the summer. They enjoyed tremendously. Highly recommend!!
My Ratings: Moral rating: Better than Average / Moviemaking quality: 4½

Ken, age 47 (USA)
Positive—I really liked this movie. I thought that all the special effects were great. It all seemed so real. The only thing I found objectionable was the cussing, and the way a girl dressed indecently. I read the reviews for this movie, but I still had to see it. I always look up my movies here before I see them but a lot, if the time I have to see the movie. Because usually I like the movie, but the people who review it say it’s boring. Just saying that I really liked this movie.
My Ratings: Moral rating: Better than Average / Moviemaking quality: 4

Joanna Childress, age 21 (USA)
Positive—Saw this movie on Fri, 5/25 with some church friends. The plot was way different than what most of us expected. We liked the little sub-plots and were delighted to see how respect and friendships developed as the movie progressed. I particularly found it admirable and touching toward the end of the movie when the Battleship Missouri was being attacked. There was only one missile left and Lieutenant Alex Hopper (Kitsch) and Captain Yugi Nagata (Asano), once bitter rivals and now friends fighting alongside each other decided to sacrifice their lives and the lives of their crew (a tough command decision) for the “salvation of others.”
My Ratings: Moral rating: Average / Moviemaking quality: 4

Keith, age 40+ (USA)
Positive—My husband and I rented this movie, and we thoroughly enjoyed it. I would have felt justified in paying the money to see it at the movies. It was action packed, funny, and yet serious, as well. I love the fact that they used soldiers who we disabled or retired—showing that these brave men and women are still useful. I would and have recommended this movie. It appears that good morals are trying to be taught for the most part—things such as bravery, sacrifice, humility, forgiveness…
My Ratings: Moral rating: Better than Average / Moviemaking quality: 4½

Miranda Weaver, age 38 (USA)
Neutral
Neutral—I started this, but it was so dumb that I completely lost interest. Maybe I glanced up once or twice more to get a look at the special effects. They were pretty good, I guess. Although I did not get why the aliens had facial hair… shaped like porcupine needles, no less. The poor acting and dialog kept reminding me of a Michael Bay movie. I couldn’t finish “Transformers: Dark of the Moon” either.
My Ratings: Moral rating: / Moviemaking quality: 3

Kadie Jo, age 20 (USA)
Negative
Negative—I was very excited to go see “Battleship”. I didn’t expect it to be a masterpiece, but a big, loud, action-packed movie that was perfect for watching with friends and gorging on popcorn. It was loud, big, and action-packed… but that’s it.

Concerning the acting, I could tell from the opening scene it wasn’t going to be good. As part of the audience, I should feel for the protagonist, but the one in “Battleship” is horrid. He’s reminiscent of (but not as bad as) Taylor Lautner in the “Twilight” films… he’s basically always got a scowl on his face and has no acting range. No one else is any better, Rihanna understandably because this is her first film, Brooklyn Decker is a model (why did that sound like a good idea?), I don’t remember his name, but an actor I recognized from some movie on the Nickelodeon channel (read: no talent)… and even the great Liam Neeson looks bored in his role.

The action is cool, sort of. While loud and flashy, it all feels cliché. In fact, the entire movie is one big cliché… we’ve seen it all before. The aliens are boring, the plot is boring, the characters are boring… “Battleship” just isn’t good. While not the absolute worst I’ve seen, I’ll leave that to “Boondock Saints II,” it’s pretty darn close to the bottom of the list.

Don’t see this movie for any reason, it’s waste of time and money… in fact, I would have gotten up and left the theater had I not been there with my cousin (who purchased my ticket). Ugh.
My Ratings: Moral rating: Average / Moviemaking quality: 1

Ben B., age 20 (USA)
Negative—This movie was awful. It was basically one big computer-generated waste of time. There was virtually no script, other than to blow things up, and the acting was poor. The script that did exist was very generic, and most people over the age of 30 have probably seen the story a thousand times—this time, they just incorporated boats into the story line. Morally—there was bad language throughout. I don’t remember much overt sexuality, but about half way through the movie, I stopped paying attention to those details due to boredom. Overall—just not that good of a movie.
My Ratings: Moral rating: Offensive / Moviemaking quality: 1

Jason, age 37
Negative—I put “none” for moviemaking quality, because this movie does not even deserve the ½ point. The reviewer’s opinion is of the movie saying “the actors are all strong” is waaaaay off. The actors are all TERRIBLE. Except for Liam Neeson. He was only in it for about 4 scenes. The director most likely took his daughter in real life and forced him to shoot the scenes for this movie, and then gave her right back. This movie was the absolute stupidest movie I have ever seen in my life. Never have I laughed so hard at a movie, even a comedy. This is better than any comedy out there! Yes, the moral ratings are correct with the objectionable content, but the movie itself is an utter joke. Everyone, save your money for when it comes out on video, and then rent it and laugh your heads off. NOT worth anything above 3 dollars. I still can’t believe how ridiculous it was…
My Ratings: Moral rating: Average / Moviemaking quality: ½

Comments from non-viewers
Positive—I loved this movie, just from the previews and actor comments.
My Ratings: Moral rating: Better than Average / Moviemaking quality: 5