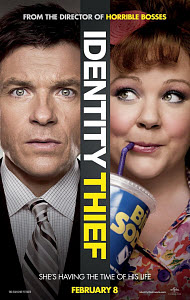 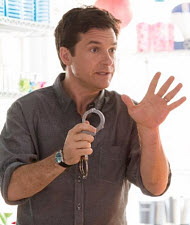 “She’s having the time of his life”

Something I like to do when I go to a movie is ask myself the question, “would this movie have been relevant 20-25 years ago?” Most of the time it is a futile exercise, but this time it paid off. Twenty plus years ago, identity theft could cause many of the problems that Sandy Patterson (Jason Bateman) faces in this movie. I could spent an entire review discussing the inaccuracies in credit reporting and credit security in this film, but that is not why you read these, so let’s get to the content.

“Identity Thief” stars Jason Bateman and Melissa McCarthy as Sandy Bigelow Patterson. Bateman is the victim of identity theft, and McCarthy is the perpetrator. Bateman works in the financial services industry, so that he breaks the cardinal rules of protecting your identity makes me question his competence. Note for readers: Your credit card company (Visa, MasterCard, etc.) will never ask for your card number, and your financial institution or its agents will never ask for your social security number. If they do, hang up and contact them. This is how McCarthy’s character gets Bateman’s information; she calls him, and he gives it to her.

After a night of partying and running up an enormous tab, McCarthy’s kicked out of a bar, and, during the ensuing altercation with the bartender, proceeds to punch him in the throat. Bateman’s character is finally made aware of his identity’s theft when he’s arrested in Denver, Colorado, for skipping a bond hearing in Florida. Bateman’s character has recently left his job to join a new firm. His wife’s (Amanda Peet) pregnant, as well as two young daughters. His new boss (John Cho) threatens to fire him over the indiscretions that McCarthy’s committed under Bateman’s name.

Bateman’s character decides to go down to Florida and convince McCarthy to come back to Denver with him to clear his name and keep his job. Needless to say this is where the main events in the plot come in and gets really confusing. A bounty hunter (Robert Patrick) is called in to apprehend McCarthy and two thugs, Marisol (Genesis Rodriguez) and Julian (rapper T. I.), who McCarthy sold bad Credit Card info to come after the two. It is almost a cross-country escapade (Florida to Colorado) for Bateman and McCarthy to clear his name.

Morally, Bateman’s character seems like the most upstanding, and that is putting it loosely. ***SPOILER*** He helps McCarthy’s character out in the end, but, still, too little, too late. Characters in this movie take part in excessive drinking, promiscuity, not to mention the theft and the violence that goes on. McCarthy has a one night stand with a stranger in the hotel room, and no nudity’s shown, but the scene is over the top. Also, there are poor sexual innuendo jokes throughout the movie, as well as a lot of implying without saying. The language is just atrocious; the f-word (or iterations) are uttered upwards of 50 times, while the s-word’s uttered over 40. God’s name and Jesus” are used as profanities over 30 times. There are lesser vulgarities scattered throughout the film, as are vulgar hand gestures.

The movie relies a lot on physical comedy, almost in excess. One recurring gag is McCarthy constantly throat punching people, when she’s threatened or startled. I counted at least five. It also makes light of drunk driving, when McCarthy is trying to convince Bateman to stop for the night.

Spirituality is not an issue at all in the movie. The only mention of the name of God or Jesus is when they’re used as a profanity. Religion is never mentioned in any way. It is just completely absent from the movie.

I don’t recommend this film, at all. Don’t go see it, don’t watch it on edited network TV, but do educate yourself on credit card security and identity theft.

Positive
Positive—This movie is rated R for good reason. It has some very, very raunchy moments and themes. I went because I enjoy the acting by Jason Bateman and Melissa McCarthy. They are indeed very funny and very good in these roles. The movie does well in showing the terrible problems created by the crime of identity theft. This is largely a well intentioned movie about how a man decides to right the wrongs created by the identity thief. There is one unfortunate detour from the basically moral stance of Sandy, played so well by Bateman. I am not sure why that theme was thrown in, but it was.

This is not a movie for children. It would be inappropriate for anyone under 17 to see it. However, I frankly found myself laughing at some very funny moments and crying at some touching scenes beautifully performed by McCarthy. The movie is entertaining and quite informative. It could have done without the raunchy elements, but they are there.
My Ratings: Moral rating: Very Offensive / Moviemaking quality: 4

Halyna Barannik, age 66 (USA)
Neutral
Neutral—My husband and I went to see this on a date night, I had read different reviews about it and had a pretty good idea how the movie would go. There was a fair amount of language, and a scene at a hotel (sexual) that was objectionable, but not graphic. If you’re easily offended, do not bother seeing this movie; otherwise, I did laugh, and it was nice to see a loving and loyal family, as well, who cared about others.
My Ratings: Moral rating: Offensive / Moviemaking quality: 3

Krys, age 32 (Canada)
Negative
Negative—This was an easy one for me. I asked myself if Jesus would have enjoyed this movie. Everything the Bible tells me about Jesus, my answer was absolutely not!! Times change, society changes, however the Word of God doesn’t. It displayed much of what the Bible teaches against. Filthy communication, stealing, lying, drunkenness, adultery—all wrapped up in a comedy that expects me to laugh at it and find it entertaining. Well I didn’t. The Bible tells us to abstain from such actions, so way would I find it entertaining? There are much better ways to spend $8 than on a ticket to this trash.
My Ratings: Moral rating: Extremely Offensive / Moviemaking quality: 2

S. White, age 42 (USA)
Negative—I have seldom felt such a sick feeling at a movie. Unfortunately, we stayed until the sex scene started with the drunk from the bar. The language was terrible, the level of some of the movie was strictly in the gutter. The previews and ads looked funny, and it was, but that shouldn’t help us rationalize our watching such filth. Christians and other people with morals unite and stay away from or leave when you encounter such an obvious decline in what is good and wholesome. I can’t help but think that the producers think that if we put in some comedy, some decent parts, and the immoral humor that it will appeal to many people. We need to not be tricked by the good parts to watch the obvious decline in our culture.
My Ratings: Moral rating: Extremely Offensive / Moviemaking quality: none

Ron Elenbaas, age 70 (USA)
Negative—Overall, this movie was worth the time to see. It contained more funny portions than those shown in the previews. My main problems with the movie were when all the alcohol consumption started. During that portion of the movie, which ended up showing the butt of a stranger in a hotel room that was sexually involved with the main female character. The movie also included a long scene of sexually inappropriate activity and sounds with the strange character of Big Chuck, who was picked up in the bar.

***SPOILER*** The end of the movie is what redeemed the main female character, by turning herself into the authorities to save Sandy Patterson’s life and career. It also showed that the main female character ended up better off by turning herself in and changing her ways. ***END SPOILER***
My Ratings: Moral rating: Offensive / Moviemaking quality: 3½

Mark, age 45 (USA)
Comments from non-viewers
Negative—I had to get up and walk out. And I did so with my head held high. As I strode down the steps towards the exit, I quickly prayed, “Lord, cause every single Christian in this theater to walk out.” As I rounded the curve at the end of the stairs to head out, I noticed a woman not too far behind me. Yes! This film was so wicked. Once again, Hollywood lures us in with the “funny” trailers. The actors we think are “clean”. I don’t watch much TV, so when I checked here first there were no reviews. Nothing. So I took that to mean…”meh”. Harmless. Lord, come soon.

SK Bruning, age 61 (USA)
Negative—Thanks for the review. Considered seeing it, but will be skipping this one and will not be wasting my money.