for action and some peril. 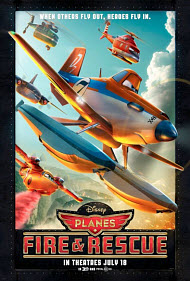 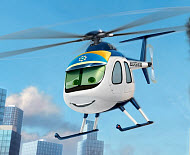 fire in the Bible

being a hero / helping those in danger 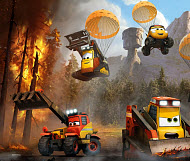 the importance of teamwork

discovering a new purpose in life when doors close

“Planes: Fire and Rescue” is a nice sequel to the first movie. I like it when sequels present very different subject matter from the original, so I was glad to see that this is not another movie focused on racing. This movie’s story opens shortly after the first movie ends. Dusty Crophopper (Dane Cook) is now famous, having won the race around the world. Unfortunately, though, he has some mechanical problems.

Dusty’s gearbox has some issues that could cause him to crash if he flies too fast, and his particular type of gearbox is no longer manufactured. One night, he pushes his limits too much and stalls. He tries to land at an airport but crashes into something which causes a fire at the airport. The airport firefighters are not well equipped to put out the fire, so as a desperate response they knock over a water tower.

The airport’s inability to properly handle the emergency causes it to lose its certification, meaning that an air racing festival to be held there would have to be postponed unless two competent firefighters could be certified. Dusty feels guilty that the airport lost its certification because of a fire he started and feels that he can take on the task of firefighting, so he begins receiving training from a team that extinguishes wildfires.

From an entertainment standpoint, I think this movie is stronger than the first one. The plot feels better paced, and the firefighting scenes are very exciting. The scenery and fires look quite realistic for an animated movie, and the dramatic music fits wonderfully. The fire scenes’ intensity and realism might be a little scary for very young kids. There are scenes of planes surrounded by fires, and a couple times planes crash and are damaged badly, but they survive and are repaired.

From a moral perspective, this is the cleanest modern movie I have seen. There are just a few comments that parents might want to know about. A character mentions kicking someone’s “Aston Martin,” and someone says “Oh Chevy!”. A character mentions a movie’s “lawbreaking love” as though she’s fascinated by it. There is also a short bar scene where beer is served, and there is one comment that might have been a lie.

The movie has a positive message about moving forward in life and finding a new direction, rather than dwelling on the past and the things you cannot do anymore. This could be a reminder of how God always gives us something valuable that we can do, regardless of what stage of our lives we are in.

Another element worth discussion is Dusty’s tendency to go against the advice of his trainers. He means well and wants to maximize his effectiveness as a firefighter, but he misjudges his abilities at times. Over the course of the movie, his reliance on his own judgment has both good and bad results. Obviously, this matter is connected to a much bigger debate about the role of authority that has many views from both a Biblical and philosophical standpoint. Nonetheless, the common denominator we can agree on is that we have weaknesses that we cannot fully comprehend, so we should not lightly disregard the perspective of those with more experience.

I think this second installment to the “Planes” series is quite satisfactory and more enjoyable than I expected. It is not groundbreaking, but the quality of the flight action and music succeeds in making a movie that’s basically average in storytelling and character design feel somewhat better than average. If you’re interested in the movie, I would recommend seeing it while it is in theaters, as some flight scenes are more fascinating to watch on the huge screen.

I give this “Planes” installment a positive recommendation as a family movie. For teenagers or adults looking for something to watch themselves or with friends, I give it a neutral recommendation. I can’t give them strong assurance that they will like it, but they may think it is fun enough to be worth an hour and a half.

Comments below:
Positive
Positive—After my husband read the official review here, our family went to the theater to see this film. Going to the theater is a rare event in these days of so many inappropriate movies! We went into this movie having never seen a trailer, and I did not read the on-line review, so I did not even know much about the premise. I think that I actually enjoyed this sequel more than the original, which had been so focused on Dusty “proving himself” by winning the race and how he was constantly seeking a sense of self worth above what he had been designed to do.

In this sequel, Dusty does get himself into some situations which only came about because of his own pride and refusal to obey those who were wiser than himself… but in every instance of this he must face the consequences and see how his selfish actions hurt others. This almost never happens in children’s movies, and I appreciated it so much! Dusty was humbled in these situations, and it steered him to becoming a more heroic and selfless individual who began to accept his limitations. See all »
I like that the actions of the “bad guy,” a national park superintendent, are clearly shown to be corrupt, selfish and dangerous to others.

I would have given this movie a GOOD moral rating, were it not for a couple of “bar scenes” and innuendo (some of which was mentioned in the initial review). Of course, the majority of this will go over the heads of the target age group, but it is still unnecessary and disappointing to have such content at all. Much of the innuendo comes from a female firefighting plane who is infatuated with Dusty (as an example, she snuggles next to him, and as he looks up at part of her wing apparatus she says, “Yeah, they’re real.”) There is no more of this than there was in the first movie, and even perhaps less, but it is enough that I cannot say there was “nothing Biblically offensive.”

As far as heroism and bravery go, this film really highlighted such selfless actions. Since it is a movie about fighting fires, there is much peril, and the fire scenes are intense and realistic. It may be a bit much for very young children… we heard a toddler cry out “Oh no!” at one dangerous scene in our theater.

Of course, when one watches a movie in which planes and automobiles represent human beings, belief must be temporarily suspended, but it was an entertaining and enjoyable film with little objectionable content.

Shawna, age 36 (USA)
Positive—Our family generally enjoyed the first “Planes” movie, but certainly felt it wasn’t in the same league as “Cars.” This second “Planes” movie was better than the first, with more humor, more action, and a pretty exciting story. From a morality perspective, I can think of nothing that was objectionable. Just a good clean movie that the kids should really enjoy, and the parents should find entertaining as well.
My Ratings: Moral rating: Good / Moviemaking quality: 5

Jason, age 40 (USA)
Positive—I have watched this a few times. …The first bar scene before Dusty goes flying at night, the truck mentions how his lady left him and “he didn’t even get some”. I missed this the first time, but that put me off a bit. Depending on how strict you are on music, the first fire scene is to “Thunderstrike” an ACDC song—and, because it’s catchy one, is likely to “sing-along” not knowing that the song is about getting lucky. Other than that, it is a good movie.
My Ratings: Moral rating: Better than Average / Moviemaking quality: 5

Rochelle, age 28 (South Africa)
Comments from young people
Negative—Wow, what a shocker—just as dull and regurgitated as the first one. It’s “Cars” with planes, nothing different or better. Glad I rented it for free. If your kid really wants a good film, let him see “Big Hero 6” or “The Croods” or “Bolt.”
My Ratings: Moral rating: Better than Average / Moviemaking quality: ½