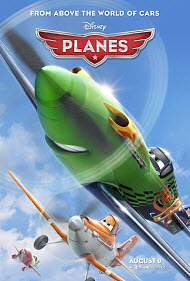 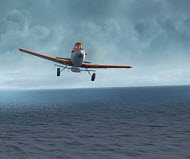 determination / not giving up

the value of optimism

“From above the world of Cars”

With high flying action scenes of loud-engined, swooping airplanes in various exciting adventures throughout a globetrotting air race to the New York City finish line, Disney’s “Planes” is full of amazingly animated scenes and an epic score written to pull little kids to the edge of their theater seats. Adults, however, won’t find it nearly as original, witty, or engaging as its Pixar counterparts, “Cars” or “Cars 2” in that one gets the feeling that all the characters have a direct formulaic line to similar characters in the “Cars” films… only they are planes instead. For instance, the young upstart character of Dusty Crophopper (Dane Cook) longs to win a big important race and enlists help from the crusty, experienced character of Skipper (Stacy Keech). Sound familiar? Just as with Lightning McQueen (Owen Wilson) and Doc Hudson’s (Paul Newman) characters in “Cars,” the mentor character ends up to be hiding a secret from his apprentice, which adds a small twist to the film in the end.

Sadly, just like Dusty’s “keep low and slow” flight mantra repeated throughout the movie, “Planes” fails to lift very high off the ground with its stale jokes and predictable plot. Though whenever I felt my eyes absently wandering to count the chaser lights along the theater aisles or contemplate the color of curtains flanking the screen’s walls, sudden heavy rock music would pound my heartbeat into sync and usher in a new vivid landscape and a fast-paced action sequence.

It was also amusing to be in a world in which all other living creatures—even birds!—are some sort of vehicle. Birds are tiny airplanes, and tractors were likened to cows. The Indian character of Ishani (Priyanka Chopra) explains to Dusty, as she gives him a tour of her homeland, that the tractors are “sacred” because they are believed to be what planes turn into when they are “recycled”—the plane version of reincarnation. (See Hebrews 9:27 about reincarnation.)

Several well-known voices in minor roles add to the drive of the film, such as John Cleese as a British racing plane named Bulldog and Val Kilmer in a “Top Gun”-esque role as a speedy racing jet. Some jokes are a bit off, like the random comparison of the behind-closed-doors removal of Dusty’s crop-dusting apparatus—called his “squirter”—to getting a vasectomy with exclamations from Dusty like, “So, this really is reversible?” and “This really won’t hurt? Wow, that’s really cold…” followed by one of his friends remarking after the “surgery,” that “Doesn’t it just make you feel free?” Hmmm. Like this example, most of the jokes go a bit over the heads of children but fall too low and miss the mark for grownups to find them funny.

There are some good moral lessons to be gleaned from this tale. Dusty’s determination to be a race-winning plane, despite his build as a cropduster, pays off, and he eventually wins the race and the respect of his competitors with his optimistic attitude. The rest of the racers learn from Dusty to be team players by his setting aside one of his potential wins to save another plane from crashing. At the end, the racers rally against the prideful Ripslinger (Roger Craig Smith) who is trying to win the race by unfair means. Dusty doesn’t give up despite dire obstacles.

As far as language earning the film’s PG rating, there are the following: some bullying remarks from the bad guy characters, mild explicative remarks such as “heck” or “kick his bottom,” slightly sexual remarks about a female plane’s back “propeller,” lipstick marks all over a male plane from his girlfriend plane, insinuation that the cropdusting “vitamins” coming from the back of a plane are like flatulence, Dusty getting a skull “tattoo” paint job of the elite military unit he idolizes, characters lying to one another, and a couple of “bar” scenes with plane characters drinking frosty glasses of motor oil while lamenting over the girl plane they are trying to impress.

The main reasons for the PG rating would be: mild violence in the chase scenes, planes getting “injured”—there is actually a line that one of the characters has a broken “rib wing,” a flashback battle scene with rapid gunfire and explosions, and lots of aerial peril involving the planes racing through snowstorms, over a storm at sea, over mountaintops, and other gripping locations that might prove too scary for the youngest viewers but would enthrall the average superhero-playing little boy. Several planes are “hurt” in their adventures, but there are no plane “deaths.” The film is strongly pro-military, with sharp military planes dashing in to save the racers numerous times.

Granted, I’m not a six-year-old boy for whom this film was invented… Yet, I am something of a modern animation and story lover, so I believe that I gave “Planes” a fair chance to impress. Where “Cars” felt like it was created to colorfully entertain children and to pleasantly surprise the adults who brought them with high caliber actors and quick banter, “Planes” has the feeling of being forcibly shoved into the “Cars” formula solely to cater to the established child-fans of the “Cars” films without adding anything remarkable to their legacy. When the credits rolled, one little friend of mine who was in the audience quickly remarked that he wanted his daddy to please buy that DVD for him when it came out… and I believe that the filmmaker’s intentions are—rather blatantly—just that.

Positive
Positive—Took my 7 year old grandson yesterday. He (we) loved it! Not as good as “Cars,” but great for airplane lovers. It is entertaining summer fun.
My Ratings: Moral rating: Good / Moviemaking quality: 3

Randy, age 65 (USA)
Positive—Dusty was afraid of heights. He helped others. He showed he can do anything.
My Ratings: Moral rating: Average / Moviemaking quality: 3

Thomas Dickensheets, age 52 (USA)
Neutral
Neutral—While I enjoyed this film, it clearly shows that Disney is not on a par with Pixar. Since Disney bought out Pixar, the films are no where near the quality of movies that Pixar produced when they were an independent company. Pixar movies had heart, emotion; stories were well told, humorous and above all, great family movies. Pixar had awesome directors like Andrew Stanton, Pete Doctor and Lee Unkrich. Disney did not use any of these directors for “Planes.” I am saddened that John Lasseter chose to use foreign filmmakers to make this movie. In fact, almost the entire credits for Planes were from India!! I am a great fan of Pixar. I own on DVD every movie Pixar ever made! With Disney running the show, we will never see good, wholesome family movies the Pixar was so good at producing.
My Ratings: Moral rating: Average / Moviemaking quality: 4½

Steven, age 62 (USA)
Negative
Negative—I love computer animation films like “Toy Story,” “Monsters, Inc.,” “Meet the Robinsons,” “Cloudy with a Chance of Meatballs.” I also love “Cars.” But this movie is not very original, in my view. And this movie, to me, is also a real children’s movie. During the entire movie, either characters are talking, or some action is taking place. Almost not a single moment of thought or reflection. And I could only laugh two or three times during the entire movie ! I also didn’t like the sacred tractors and recycling thought. I also didn’t like the apparent ease with which lies and deception were dealt with.
My Ratings: Moral rating: Average / Moviemaking quality: 2

H., age 48 (Netherlands)
Comments from young people
Negative—I usually do not review movies I hated, but I need to warn people how bad this film is. So glad I spent 0 dollars on this and rented it from my library. Not only is the movie dumb and boring, but it is the same regurgitated story from “Cars” but with planes; the difference: “Planes” stinks. We get it, the plane wants to go fast (Lightning McQueen), and his mentor is a washed up old timer (Doc). It is the same dumb thing. Do not buy this movie. Go see “Big Hero 6” or “Bolt” or “The Croods”—good animated films.
My Ratings: Moral rating: Excellent! / Moviemaking quality: ½