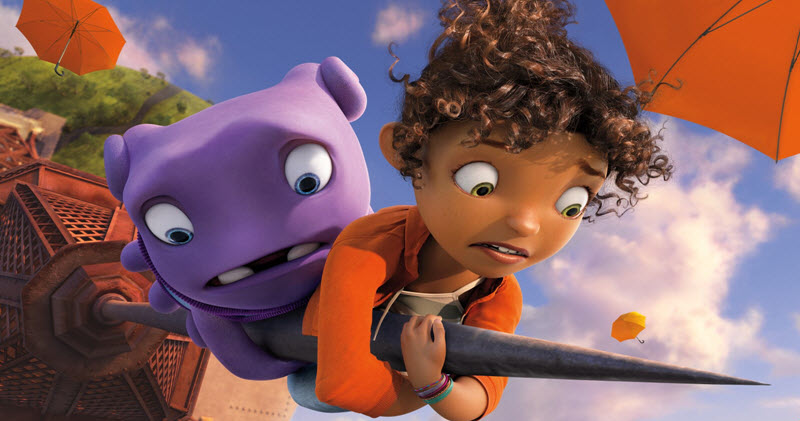 for mild action and some rude humor. 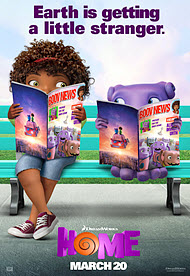 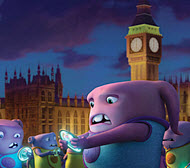 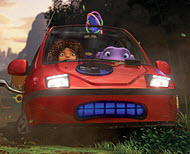 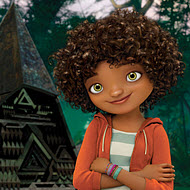 the true meaning of the word “home”

being a misfit / not fitting in 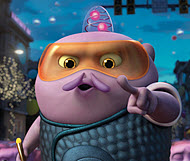 “Home” is an animated movie with a wild story about an alien species known as the Boov who move from planet to planet to escape their enemies, the Gorg aliens. The movie opens as the Boov arrive at their latest planet, Earth, and transport humans to Australia. A teenager girl, Tip (Rihanna), avoids being relocated. One particular Boov named Oh (Jim Parsons) is wanted by the Boov authorities due to an email blunder that revealed the Boov’s new location to the Gorg. Oh encounters Tip while he is on the run, and he agrees to help her find her mother in Australia, but that mission is complicated by encounters with police and the risk of Gorg invasion.

I found this to be an entertaining movie with dialog that is amusing, even though it is often silly, and the visual detail is impressive. There are also positive messages involving the importance of family and willingness to question conventional approaches and take risks. The Boov have a practice of never attempting something if their calculated chance of success is less than fifty percent, regardless of the risk/reward ratio or consequences of not taking action. Oh eventually learns that taking greater risks can be rewarding, which works fine in the scope of the movie. However, in real life people can become reckless and take major, unnecessary risks for a potentially large reward. If I were to expand Home’s message into a Christian-themed lesson, I would include discussion of faith and Biblical consideration of motives when going against the odds.

As for my overall opinion of “Home,” I think this is a good movie that is probably clean enough for most families to accept, and kids will enjoy the humor and action. Older children and adults, if they like animated comedy or adventure movies, will probably find this entertaining, as well. One thing I can say is that if you watch this movie, there is one scene that you will remember every time you see the Eiffel Tower!

Sexual Content: A male Boov is dressed in a girly outfit at a party. There is also a Boov shaking his posterior while dancing.

Violence: There are several scenes of spacecraft chases, sometimes involving destruction of buildings. A Boov is often seen running away from the police, and once he attacks a police officer in a food fight. The enemy alien character, present in several scenes, wears slightly scary-looking armor. A girl almost gets hit with a very sharp object. There is also the usual scene near the end where it looks like a main character has fallen to his death, but he resurfaces. Also, the main character is repeatedly threatened by the police of being “erased,” although that punishment is not defined.

Language: Someone says “curse you,” and a character is called an idiot.

Other: There is some bathroom humor, and a few instances of lying or promise-breaking. The main character plays a gambling machine on one occasion.

Positive
Positive—My brother and I took my niece and her friend (both 10 years old) to this movie. The theater was full—mostly younger kids. We all thought the movie was good. There were a lot of laughs, and the kids in the audience reacted to the movie in a fun way. There were good messages about not lying and about loyalty, and the importance of family.

I didn’t think there were any objectionable things in this film. We were all pleasantly surprised, since I didn’t have high expectations after seeing some of the reviews. It wasn’t the best movie we’ve seen, but it held our interest and was funny and touching. I would take younger, kids, to see this movie without worrying about bad language or frightening them too much. There aren’t too many movies out these days I could say that about.
My Ratings: Moral rating: Good / Moviemaking quality: 4

Louis, age 53 (USA)
Neutral
Neutral—This is a good movie for children, but teens and adults may be bored. My 10 and 12 year old grandsons said it was just OK, and all the laughter in the theatre was from little girls. The art and its resolution is typical of Saturday morning cartoons, and the gags are aimed at the very young.
My Ratings: Moral rating: Good / Moviemaking quality: 3

Brian Schacht, age 68 (Canada)
Neutral—Good film. There are just a few scenes where “Captain” was shaped like Satan (horned creature). One message that was sent out was that if the leader is not able to lead, that leader must be overrun and cast out and replaced by “The Brave One” A little undertone of Evolution can be detected, as well. And you may be left being asked “can I come into the out now?”
My Ratings: Moral rating: Average / Moviemaking quality: 5

Francois Marais, age 32 (South Africa)
Negative
Negative—I don’t know what is wrong with this movie that I didn’t like it. It might be that the important characters are treated with no respect (a girl named “Tip/Gratuity”) and a cat named “Pig”. It could be that the girl considers her mother family, but there is no mention of her father or other children. Only well into the movie does it first become clear that the girl is in fact a girl: this was important, but not to the script writers.

The main Boov character, Oh, is named at the beginning and at the end of the movie, but hardly in the middle. He’s an idiot, so who does this leave to identify with? It’s like a story that is full of funny parts, but is not actually funny. I was surprised to see in the credits that Rihanna was the voice of Tip; maybe that’s where the problem is.
My Ratings: Moral rating: Better than Average / Moviemaking quality: 4

Andrew, age 43 (South Africa)
Comments from young people
Neutral—I think this was a great movie. I had some issues with the lying. I love how they made the lying obvious. The way that the main character, Oh, changed color to show his emotions, was very good. The filmmakers, didn’t make any white lies or grey lies, or in this movie, light green lies. They made the lies, equal.

The one thing I had a problem with was the alien issue. This movie, in a way, suggests aliens. Oh is a creature from another planet, or an alien. I believe that aliens do not exist. The Bible says, for ALL have sinned and fallen short of the glory of God. If aliens were real, that verse in Roman 3:23, would also apply to aliens. John 3:16 says “For God so loved the world, that He gave His only begotten Son, that whoever believes in Him shall not perish, but have eternal life.” He loved the whole WORLD, not the whole universe. If Jesus died for the world, not the universe, then what about the aliens. Jesus would have to go and die for their world too. He didn’t do that. So the aliens wouldn’t be saved. God is a God of mercy. He would not only let humans into heaven, unless, they were the only ones in the universe. This is what I believe.

People have asked me, “What would happen if sometime in the future, we found life in our universe other than Earth?” My answer is, “Then it is another one of God’s wonders”. Overall, I think it was OK, but my soul was a little uncomfortable with the alien part.
My Ratings: Moral rating: Better than Average / Moviemaking quality: 4½

Valeska Moya, age 12 (USA)
Positive—I watched the preview on YouTube for this movie, and it gives it NO justice. When I walked into the theater, I was expecting a corny movie that my little sister had picked out, but I was totally surprised at how much I actually enjoyed it! There is no bad language or inappropriate material, and, also, this movie was really cute! Oh, one of the main characters, has a really forgiving heart and a sweet spirit, which is really touching. Tip, the other main character, is filled with love for her mom and also befriends a character whom other people tend to slough off. I really enjoyed this movie!
My Ratings: Moral rating: Good / Moviemaking quality: 5

Lena, age 16 (USA)
Comments from non-viewers
Negative—The main character is played by a foul-mouthed homosexual.That should be reason enough to not see this movie. And the Girl is played by Rihanna. That does not help my opinion of this movie.