for language throughout, some sci-fi violence and terror. 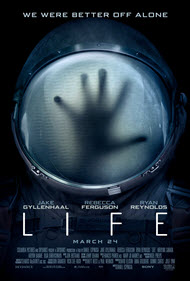 Accurate, in-depth information on Creation/Evolution. The SuperLibrary is provided by a top team of experts from various respected creationist organizations who answer your questions on a wide variety of topics. Multilingual. 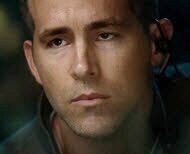 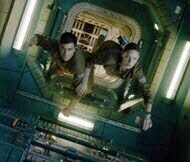 “Be careful what you search for… We were better off alone / Fear life. Not death.”

Six astronauts on board of the International Space Station have achieved, to many, the impossible…the discovery of the extra-terrestrial life on Mars. On board the station, five astronauts (Miranda, David, Roy, Kat and Sho) stand outside of a quarantined room where one of the lead scientists, Hugh, examines the extra-terrestrial (no larger than a leaf) residing inside a small container). Hugh and his colleagues soon ask the ultimate question: how has this creature survived on a planet like Mars for so long?

Over time, one scientist in particular, Hugh, almost obsessively, spends more and more time with the extraterrestrial, whom the group has named Calvin. After showing signs of life, however, Calvin begins to hibernate and after making such progress, Hugh asks “Why?” So what does Hugh do? Well he gives Calvin a little jolt… no literally… a jolt of electricity to stimulate Calvin.

There’s an old saying, “Let sleeping dogs lie.” In this case, as the astronauts soon they discover, Hugh should’ve left Calvin hibernate. No sooner, after awakening from his slumber, Calvin escapes his prison and begins to wreak havoc aboard the International Space Station

So much for a CONTROLLED experiment.

Writing a review about the film, “Life” has been somewhat frustrating, as I’m rather tossed on my feelings for the film. There are good and bad aspects. As such, I’ve decided it’s best to summarize my thoughts on the film as bullet points. So here goes…

• Level of Violence: Violence is often graphic, disturbing, and, in some instances, nauseating (there are multiple scenes involving blood. More on violence to be discussed in the Content portion of the review).

• Character Development: As is common in horror films, character development falls by the way side, and “Life” is no exception. To be frank, I walked in not really knowing who the characters were, and I walked OUT not knowing who they really were and, frankly, did not care about who survived and who did not.

• Overall the pacing of the film is steady. There were only a couple instances, about half way into the film, where I found some of the dialog to be rather tedious and mundane.

• The Visuals: What the film may lack for in development and, occasionally, pacing (it varied) the visuals of the film were spectacular, particularly during the first fifteen minutes of the film where we are treated to breath taking detail of space and the Earth.

• The scoring of the film was solid, providing the necessary adrenaline for the horror sequences, as well as the more quiet moments, of the film.

Violence: Heavy to Extreme. As mentioned earlier, Hugh tries to wake Calvin up by shocking him with electricity. Other characters try to kill Calvin through means of fires, thrusters, and again, more electrical shocks. Calvin is quite brutal in his encounters with his caretakers. In the first encounter, Calvin devours Hugh’s hand. We later see the remains of Hugh’s former hand (it is bloodied and no longer resembles a hand). In another scene, Calvin crawls inside a character’s body and kills the character from the inside (we see a large amount of blood coming from the character’s mouth as the character slowly dies). Other characters are fully devoured by Calvin. Another character drowns when Calvin cause coolant to fill insider her helmet. Other characters have parts of their body devoured and dead bodies are often seem floating throughout the station. Lastly, a lab rat is graphically devoured by Calvin (the rat is alive during the digestion process, and we watch as each layer of the rat is shown).

Other: During an interview an astronaut is asked, by children, how they go to the bathroom on the station, to which the astronaut shows the children the device they use.

The pacing is good, the performances (not the development) are pretty decent, and the cinematography is relatively strong. On the other hand, there is a lot of graphic violence to contend with, and the character development is weak. The violence alone is enough for me to dissuade Christians from seeing this film. “Life” is NOT for children or young teens—adults only. We need to always be cautious on what we put into our bodies from this world. Its influence is great and we always should be on our guard. In the end, we should stop and ask ourselves if this is what God would want us viewing and how much we should endure before we walk out of the theater.

Positive
Positive—This film, Life, is a pretty good horror film. Now, it has its bad parts (The violence is absolutely disgusting at moments, lots of profanity, etc.), but the film has its good parts (Pretty interesting, genuine scare, a crazy twist at the end of the film which will shock you ((it did me)). Do I recommend this film? For Christians and young teens and children, no, but for adults and people who can stomach the gore and love a good scary film, heck yeah!
My Ratings: Moral rating: Very Offensive / Moviemaking quality: 3½

Matthew, age 42 (USA)
Neutral
Neutral—Essentially an “Alien” remake with some intriguing special effects, a diverse cast of decent actors in underdeveloped roles, but not as interesting or frightening as “Alien.” At some level it’s a critique of taking risks with the unknown and hoping you can contain the damage. Of course people must sacrifice themselves to save others. The Alien eats earth life in imaginative if disturbing ways. There is a little cussing. Problem is that there is only so much variation from the “Alien” plot that is possible.
My Ratings: Moral rating: Average / Moviemaking quality: 3½

Movie Critics
…Get prepared for the most intense two hours of your life… [4/5]
Jessica Walford, Metro [UK]
…“Life” is far better than the trailers made this me-too outer-space opus look. …could have used a few more cathartic laughs, although it’s a relief that the entire movie isn’t as self-aware or sarcastic as the writers’ reputation-making “Zombieland.”…
Peter Debruge, Variety
…It’s far from perfect, but Life’s worth living for two freaky hours. …
Brian Truitt, USA Today
…“Life” struck me as several cuts above “meh” but never made me jump out of my seat. The picture takes place almost entirely on a claustrophobic, labyrinthine space station… [2]

Glenn Kenny, RogerEbert.com
…it’s not very good… The primary suspense comes from wondering whether the killings will follow the reverse order of star billing. …
Ben Kenigsberg, The New York Times
…like a box of mediocrity. …space horror thriller undercuts its effective tension with clichéd scares…
Blake Goble, Consequence of Sound
…The picture struggles to find a satisfying rhythm… most would be quite surprised if Life's hints at a sequel lead to even a single spinoff, much less the decades-long afterlife enjoyed by Ridley Scott and Dan O'Bannon's versatile face-hugger.…
John DeFore, The Hollywood Reporter