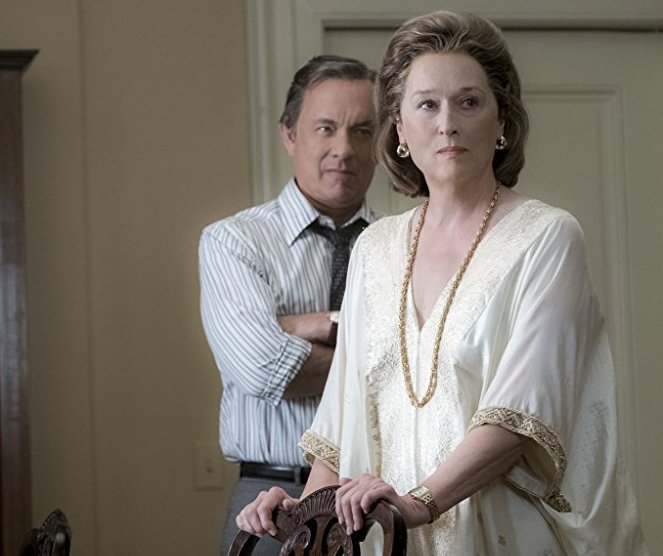 for language and brief war violence. 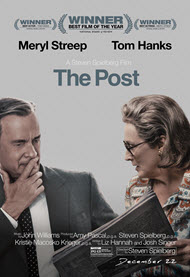 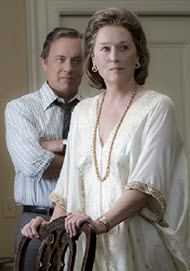 What is good journalism in a free democracy?

The newspaper was sold in 2013 to billionaire Jeff Bezos (founder of Amazon.com) by the Graham family that had long controlled the paper. Bezos is apparently a Libertarian Democrat who primarily supports Democratic Party candidates and is a major backer of Gay marriage. 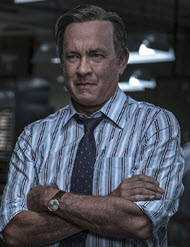 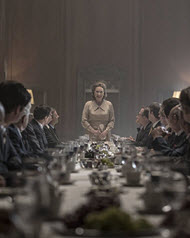 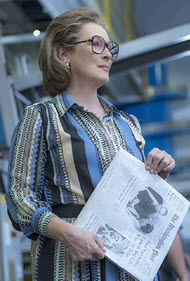 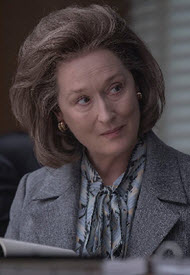 Steven Spielberg’s “The Post,” about The Washington Post’s struggle to publish the controversial Pentagon Papers, is a formulaic, and sometimes gripping, press-room procedural. It glides over the actual history of the Pentagon Papers, how they were pilfered by Rand Corporation analyst Daniel Ellsberg, leaked to The New York Times and, when ultimately published, fomented widespread anti-government sentiment whose residue still lingers today.

Some might say the struggle between the press and The White House that plays out on the screen has corollaries to today’s events. That’s a bit of a stretch; it’s reading too much into this “topical” drama that has nothing new to say about the events of 1971, or for that matter, today.

“The Post” is not the cinematic milestone that so many critics are lauding it to be. Remember, those critics are journalists themselves, and, more importantly, they are liberal secularists. In the same way skiers love “Downhill Racer” and baseball players love “Bull Durham,” news people are sure to take to Spielberg’s melodrama the way movie moguls take to starlets. Journalists vehemently defend their profession, and use that profession to spit fire at their enemies. They always have a bete-noir who they use for a dartboard, and the target is almost always a member of one political party. And since Spielberg’s movie takes place in the early seventies, who better than Richard Nixon to be both bad guy and harbinger of even worse things to come?

The filmmakers have served up some gratifying entertainment, but because their movie has the air of a crusade, they need to be held to account for leaving important key points out of their polemic. For a film purporting to honor the First Amendment and the public’s right to know, its makers keep their public in the dark about several key elements of the Pentagon Papers history.

For instance, did Nixon take us into the war in Vietnam? No. Was Nixon implicated in any of the Pentagon Papers? No. Those Papers did reveal some unsavory facts about some of the Left’s favorite figures: John F. Kennedy, Robert F. Kennedy, Lyndon Johnson and defense secretary Robert McNamara.

By trying to stop the publication of the Pentagon Papers, Nixon was not protecting himself. That was something he was never good at. He was trying to protect classified government and military information which, if released, could jeopardize negotiations that were taking place at the time between the U.S. and the Vietnamese. Yes, the public has a right to know what its government does and the press has a right, and a duty, to report those deeds. On the other hand, there is as much nuance in these conflicts as there is principle, and nuance is something Spielberg has never had a handle on. He tends to pick a side, and then stolidly carry the water for that side.

At the end of any dispute, it always comes down to what is the right choice to make, and I concede that the editor and publisher of The Washington Post made the right choice to publish the Pentagon Papers. However, that decision was not without a downside. Spielberg owes his viewers at least a glimpse of that other side. By not doing so, he cheats his audience, and his own work.

Meryl Streep tones down her usual ostentatious acting style (I find most of her recent performances overbearing and uncentered) to give a vivid portrait of a woman who struggles through each decision she is asked to make. Burdened by grief (over her husband’s suicide) and doubt (she took over ownership and publishing duties at the paper right after her husband’s death), Graham boldly took a risk and put everything on the line: her business, her reputation, her self. In the end, she might not have been sure—who ever is?—but she did what she thought was right. Hers was a quiet heroism, not the phony kind exemplified by wearing black couture to an awards show.

What a shame that Tom Hanks’ performance is no match for Streep’s. His is a far cry from Jason Robard’s portrayal of Post Editor Ben Bradlee in the 1976 film, “All the President’s Men.” Robards gave a freewheeling edge to Bradlee’s crustiness, making him, if not an ideal boss, at least a stimulating one—no doubt a pleasure to work for. But there is no pleasure to be found in Hanks’ performance. His Bradlee is leaden and grim, tying the performance in knots by trying to sound coarse and gruff. He comes off sounding like someone who has a potato caught in his throat.

Publishing the Pentagon Papers, which detailed the discrepancies between what officials said publicly and what they said in private, was the start of a decline in the public’s trust in its elected officials. Today, the executive and legislative branches of the government have record low approval ratings. The only institution that the public trusts even less is the press.

Will “The Post” help to restore the reputation of newspapers and the media in general? I doubt it. The movie lacks the clarity, the honesty and the fairness to do so, much like the media it tries so hard to elevate.

Perhaps if the press corp and the film industry heeded the one true source that speaks clearly of the Good News meant for all people, they might have a better shot.

Editor’s Note: Both Meryl Strep and Tom Hanks are Liberal activists. In an interview, Liberal Director Steven Spielberg said that he felt this movie was so urgently needed that he shuffled his schedule to push “The Post” quickly into production, “I thought this was an idea that felt more like 2017 than 1971. I could not believe the similarities between today and what happened with the Nixon administration…I realized this was the only year to make this film.” —The Hollywood Reporter

Positive
Positive—An interesting true life movie with good acting and Spielberg directs, but a bit slow and plodding. Overall, I enjoyed it and would definitely watch it again, but I wouldn’t pay to see it twice. Meryl Streep always plays great character roles and is up for an Oscar as Best Actress, and Tom Hanks is once again unique and solid.
My Ratings: Moral rating: Better than Average / Moviemaking quality: 4
Christopher, age 62 (USA)
Positive—I disagree wholeheartedly with the reviewer of The Post which I think is one of the year’s best films. This film is as suspenseful as any thriller this year and it is an important film about freedom of the press. In an age when we have a president spouting the term “fake news” every other day and attacking the press, we need a film like this to remind us that we the people have a right to know about what is going on. I was never bored watching this film and it is very careful to keep the audience informed about what the Pentagon Papers were and what is going on. See all »

I was never lost once in this film even though the events happened before I was born and the fact that there is a lot going on here and it happens fast. Meryl Streep gives a powerful performance as a woman trying to run the Washington Post when at the time a woman in her position was virtually unheard of. The film shows her intelligence, her vulnerabilities, and ultimately her bravery as she tries to stand strong as a woman head of a boy’s club. The point is argued exceptionally well by Hanks” wife(well played by Sarah Paulson in a role that could’ve been thankless but which was not) in a great speech. Streep’s scene with Bruce Greenwood at his home where she becomes angry at him for his role in the Pentagon Papers is brilliant and I could watch it again and again. Tom Hanks should’ve received an Oscar nomination for his performance in this film. It is one of his best in years. I think he did even better than Meryl Streep and his character is fascinating to watch as he argues for the right to inform the public of their right to know. The final scene could’ve been an “oh please” moment but Spielberg attaches it so well that I hope he could remake “All the President’s Men.” I know that film is a classic and it is a great film but its only flaw is that seeing today it could be confusing since it was made just a few years after Watergate and to today’s viewers it could be confusing since it refers to things that are outdated. The Post never makes that mistake and it is an important film that should be seen by High Schools around the country. Brilliant!
My Ratings: Moral rating: Average / Moviemaking quality: 5
Andrew, age 41 (USA)
Positive—I respectfully disagree with the reviewer, who put a lot of political ‘spin’ into this review. This film has a strong moral message about the importance and power of the truth (which resonates with Scripture, e.g. 2 Corinthians “we can do nothing against the truth, but only by the truth”). It also highlights the importance of elected officials being accountable to the people. The protagonists exhibit a great deal of courage and fortitude in doing the right thing to publish the papers. There are many similarities between the high-handed actions of the government in 1971 to today. This would be a good film for Christian teens to see and understand more about the First Amendment, the Supreme Court and other aspects of our government.
My Ratings: Moral rating: Better than Average / Moviemaking quality: 4½
Christopher, age 37 (USA)

Comments from non-viewers
Negative—I ran across The Post for $5 and, loving Hanks and Streep, I picked it up. I came here before viewing to find out if I wanted to watch it. I am very bummed to find so much “language” in a PG-13 movie! I tho’t I was being pretty safe but that seems way over the limit. Why they gotta use religious-based profanity and the ugly f-bomb? I’m trashing it.
Sis, age 62 (USA)