for extended sequences of violence and action, and some suggestive references. 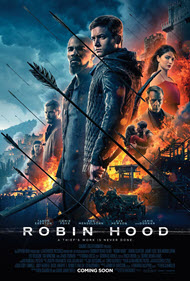 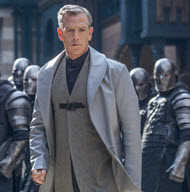 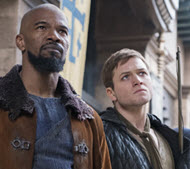 Willfully confusing the actions of sinful, arrogant and extremely evil people who identify as Christians, with the true outcome of properly following Jesus Christ as the Bible instructs—confession of one’s sins and sinful nature, genuine repentance, living in continual humility, acting in love and mercy, etc.

Modern distorted revisionism of the history of Islam and Christianity

God has strong words against hypocrites 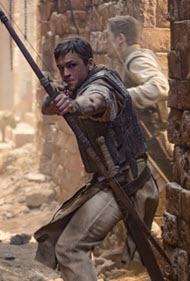 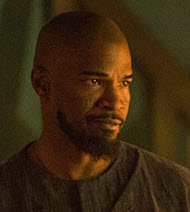 Robin of Loxley has it all. Fame, status, land, and the heart of one of the most beautiful ladies in all the land, Marian. In the world’s view, life doesn’t get much better than this. In Nottingham, the rich stay rich, and the poor stay poor. Or wait? Or is it the rich get richer, and the poor get poorer. Yeah, that sounds more like it, from the appearance of those who actually LIVE in Nottingham under the dictatorial reign of the Sheriff of Nottingham.

But enough of that! Let’s return to our hero, I mean uh, protagonist, Robin of Loxley. He has it all… until it is all taken away when he is suddenly enlisted in the draft to fight the Arabians in the Crusade War.

Yes, all is not well for Robin upon his return. Four years have passed. During this time, Robin’s manor has been repossessed by the sheriff as a “war tax,” his true love has found another, and he, for all intents and purposes, has been presumed killed in action. “What purpose do I have?” wonders Robin.

But then he comes across a somewhat hostile, but noble Arab Muslim named Yahya (called John) that almost killed him during the Crusades. John sees something in Robin. A need for revenge, sure, but a real need for justice and to free the oppressed from an unjust government.

But wait, how’s Robin supposed to do that? Protest peacefully? Nah, others have been trying that. Overthrow the government and elect new officials? No, that’s not it. Ah! Steal from the government. You siphon the wealth, you siphon the power, and then you give that money back where it was taken from… the people.

And that’s exactly what Robin and John end up doing. But it has to be secret. No one must discover their true identities. And so begins the tale of “The Hood.”

p>The setting consists of architecture reminiscent of both early Asia and that of Europe, instead of focusing primarily on Europe, which would be historically accurate regarding the Crusades and in the original telling of Robin Hood. There are a couple scenes where the sets are so cheaply designed that it stands out in a very bad way (e.g., the buildings used in the fight sequence with the Arabs in the beginning of the film).

In this retelling, the film aligns itself more directly with the original tale in which Robin is “born into wealth,” and then has everything taken away from him, instead of being born into poverty. The central focus of this latest tale is on the theme of revolution and standing in the way of oppression at all costs, with Robin simply serving as a means of starting that revolution.

In my opinion, this film outright attacks Christianity. Not only does it depict the Roman Catholic Church as rotten from the inside out—from the Pope down to the local friar—but no one who is Christian is painted in a positive light. All seem to be evil, greedy, selfish and self-absorbed beings bent on domination and control. Even local townsfolk have distorted views of Christianity. I am sickened by the way that Hollywood views (and depicts) Christianity.

Violence: Heavy to Very Heavy. A man has his arm chopped off (we see his missing arm briefly and some blood). A person is shown being hung upside down with arrows in his side, while alive. A prisoner is tortured for information. A character is hung, and we see the corpse hanging afterward. Another prisoner is executed off-screen. A neck is broken. Dead bodies are shown. People are abused and tossed to the ground. There are explosions, and homes are seen being burned down. There are multiple scenes of people being shot and killed with arrows (nothing extremely graphic though).

Profanity and Vulgarity: God’s name is used in vain two times (“G*d-d**n”), “d*mn,” “h*ll” (4), “p*ss” (2—including: “I’m going to boil you in your own p*ss”), balls, bollocks, b*stards, bloody, sh*t (2), orgy, idiot. There is some rather disturbing dialog regarding child abuse that was conducted by Catholic church officials. Someone graphically describes a decapitation. Someone says they are doing “God’s work with the devil’s pride,” and someone also states that “dogs will lick blood off the street.” A lascivious Crusader captures a girl and puts her in a carriage box, saying, “I'm gonna have fun with you later.” The Sheriff threatens Marian by saying he will send her to be bred with savages.

Sex and Nudity: Moderate. Robin and Marian share a few passionate kisses (one results in them waking up in bed the next day—covered). People are seen apparently having sex at a party (very brief). Some female characters wear revealing outfits. Another couple kisses. Robin and John are seen shirtless a couple times.

An underlying theme is wealth and greed and poverty. Jesus spoke about the dangers of wealth. A man came up and asked him the following:

Jesus responded by telling him he must follow all the commandments Moses gave, which the rich man claimed he had done since birth. Jesus then asked:

There is still one thing you haven’t done,” he told him. “Go and sell all your possessions and give the money to the poor, and you will have treasure in heaven. Then come, follow me.” —Mark 10:21

The man left in gloom, because he had so much, had spent so much of his life trying to obtain wealth (and probably the power that comes with it), that he just couldn’t bear to part with it. Jesus commented:

Having wealth is not a sin. God may provide wealth as a blessing and so that one may use it to serve Him and show mercy by helping those in need.

“If anyone has material possessions and see his brother in need and has no pity on him, how can the love of God be in him?” —1 John 3:17

“Command those who are rich in this present world not to be arrogant nor to put their hope in wealth, which is so uncertain, but to put their hope in God, who richly provides us with everything for our enjoyment. Command them to do good, to be rich in good deeds, and to be generous and willing to share. In this way they will lay up treasure for themselves as a firm foundation for the coming age, so that they may take hold of the life that is truly life.” —1 Timothy 6:17-19 NIV

Every once in a while I walk out of a movie theater thinking, “This movie just should not have been made.” “Robin Hood” is one of those films. Apart from some originality and a few strong scenes with Taron Egerton and Jamie Foxx, the movie is a blatant, blasphemous attack on Christianity, in general, and on the Roman Catholic in particular. I recommend against supporting or viewing this film. It is not a good use of a follower of Christ’s time or money, and you really won’t be missing much—it’s not very interesting or well done.

Positive
Positive—I have to disagree with the reviewer… I rather enjoyed the movie and feel it would benefit followers of Christ to see it. I like how they changed the legend so it wasn’t simply a retelling of things we’ve seen before. The style of dress and the architecture involved wasn’t consistent with the period, but I didn’t have a problem with it.

Yes, it was an attack on the Catholic Church but it’s not unwarranted… it hasn’t exactly been a beacon of morality and is rife with a history of abuses. Sometimes believers need to be called out in order to learn from past misdeeds, and that, in itself, is a reason for believers to see it.
My Ratings: Moral rating: Average / Moviemaking quality: 4

James Carpenter, age 48 (USA)
Negative
Negative—Who wouldn’t enjoy a new version of Robin Hood—fighting for justice against the cruel sheriff of Nottingham? Instead, we are served a jumbled attempt at a hyped up punk version of the famous tale that left me somewhat confused with its cryptic plot line. Then they add the inevitable politically correct in-your-face portrayal of Robin (Taron Egerton) as a bumbling white “Christian” who can only be successful when he is tutored by a black Muslim (Jamie Foxx). Really? Save your money honey.
My Ratings: Moral rating: Average / Moviemaking quality: 2

Secular Movie Critics
…The more invested you are in the old-fashioned Robin Hood of legend—the less likely you are to enjoy what amounts to a chilly and flavorless frappé of historical speculation, revisionist folklore and every lazy action-movie cliche ever written. …
Michael O’Sullivan, The Washington Post
…Like Guy Ritchie’s ‘King Arthur,’ this tries hard to do something new and exciting with an old formula. It quickly makes you wish for something more traditional and straightforward. …
Dan Jolin, Empire [UK]
…A thoroughly incoherent movie salad. …
Emily Yoshida, New York Magazine (Vulture)
…There’s nothing particularly memorable about “Robin Hood” even when you’re laughing at it, and that may be one of the saddest fates a movie can meet. …
Dominick Suzanne-Mayer, Consequence of Sound
…The plot is twisty in a perfunctory way, the action predictably explosive, the sought-after exhilaration nonexistent. …
Glenn Kenny, The New York Times
…If there’s one thing about the legend of Robin Hood the makers of the new film version take to heart, it’s that stealing is good. …Taron Egerton steals … and steals … and steals…
Michael Ordona, San Francisco Chronicle
… Mendelsohn’s villain is boringly one-note, Eve Hewson’s Marion uses an incongruous Yank accent and always looks as though she's just stepped out of the makeup trailer, …Foxx seems pissed off that he's not somewhere, perhaps anywhere, else. As for Egerton, he’s a boy doing a man’s job. …
Todd McCarthy, The Hollywood Reporter
…shameless silliness only takes it so far, as the film is frequently undermined by Otto Bathurst’s wobbly direction. …
Keith Watson, Slant
…it plays fast and loose with loaded political iconography…
Katie Walsh, Tribune News Service
…On all fronts, it strives to twist the Robin Hood story into something more provocative, but ultimately it’s a garbled, hollow mess of attempts at relevancy. …
Maureen Lee Lenker, Entertainment Weekly
…bizarre…
Marc Savlov, The Austin Chronicle
Comments from non-viewers
Negative—I know it’s cliché to say, as it is a frequently touted meme, but, in this case, it fits like a glove: Get Woke, Go Broke. I’m hoping that, eventually, the folks that hold the purse strings for Hollywood movie making will realize that this meme is true, and they’ll stop financing these left progressive agenda train wrecks. As for an end to them smearing our Lord, that will probably not happen until the day they have to confess on bended knee, his rule and his righteousness. So, be not afflicted by their blasphemy, as they only diminish themselves by doing so. Jesus is Christ and Lord! Hallelujah!