for action, some violence, rude humor and brief mild language. 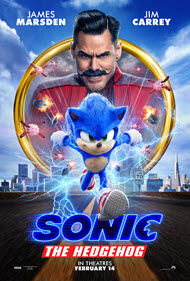 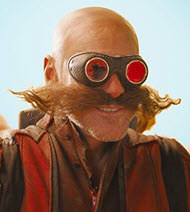 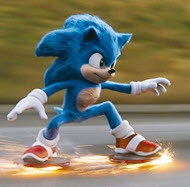 Movies based on video games 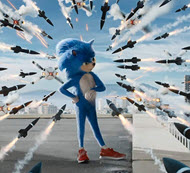 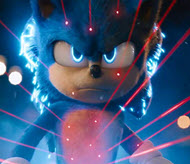 Sonic has lived most of his life on his own, isolated and unbeknownst to the inhabitants of Green Hills, Montana. Sonic is a hedgehog with a remarkable power, the ability to travel up to speeds of hundreds of miles per hour. Now, Sonic is no ordinary hedgehog. He actually came from an entirely different planet and lived with a hawk named Longclaw. Unfortunately, there were those, even on Sonic’s home planet, that sought to take control of Sonic’s super speed power and would stop at nothing to catch him. And so, before Sonic could even say goodbye to Longclaw, Sonic, through his magical golden rings, was sent to Green Hills.

For the past 10 years, he has been casually observing, spying, and perhaps messing around with the people of Green Hills, without being seen. Sonic was warned, prior to leaving his planet, that if he were ever spotted in Green Hills, he was to use his golden rings to depart for another planet where no one would ever find him: a planet of mushrooms. But now everything is about to change for Sonic…

One night, as he is having some fun at a baseball field, he accidentally causes a massive power outage across the entire Pacific Northwest region of the United States. “A minor mistake, perhaps no one noticed?” says Sonic. Oh, they noticed! Now the U.S. Government is on the lookout for this mysterious creature that caused the outage and has even gone so far as to enlist the help of the crazed, eccentric Dr. Robotnik (played by the very talented Jim Carrey).

Sonic’s got another problem, too. While snooping on the local sheriff, Tom Wachowski (James Marsden), he is shot with a tranquilizer as he is trying to escape to another planet. As he attempts his planetary escape, instead of imagining the mushroom planet, he imagines the city of San Francisco, and he accidentally drops the rest of his golden rings through the Golden Ring portal into San Francisco.

Sonic must make it to San Francisco, retrieve his Golden Rings with Sheriff Tom, all while avoiding the eyes of the U.S. Government and the evil Dr. Robotnik.

Movie adaptations of video game franchises are almost always a hit or miss in the moviemaking industry. Critics are usually not very kind to these type of films, and truthfully, having seen a few of them myself, I can understand why. For starters, with many of these video-game-to-film adaptations, so much of the focus is on recreating the action that was found in the game, and not on the actual plot or character development, which may cause you ask to yourself, “Couldn’t I have spared myself the price of admission and simply played the video game myself?” The number of films that fall under this category are endless: “The Resident Evil” film franchise, the film “Hitman,” “Need for Speed” (which I myself reviewed), etc.

“Sonic the Hedgehog,” I feel, is that rare exception, like “Detective Pikachu” was last year. In my opinion, “Sonic” has found a good balance between action, plot development and a sense of pacing, while genuinely touching upon issues of loneliness, acceptance, importance and self-sacrifice. As I’ve stated before, many years ago, I thought the time for strong morals and children’s films had passed, but now with films like “Detective Pikachu,” “The Grinch (2018)” and “Wreck it Ralph 2,” I feel that Hollywood might be coming to the realization that families want wholesome lessons in their films, while avoiding filthy and degrading humor (or at least large quantities of it).

Additionally, “Sonic the Hedgehog” has some terrific performances from an all star cast. Ben Schwartz provides a balanced, humorous portrayal of the iconic yet lovable Sonic that had me dealing with a range of emotions throughout the film (from laughter to heartache). James Marsden fit right into his role as Sheriff Tom Wachowski, playing up the laughs alongside Schwartz’s portrayal. But the real star, even though this is Sonic’s movie, is Jim Carrey, as Dr. Robotnik. You can tell he was having the time of his life and that the people alongside him (his henchmen co-stars) were trying their hardest not to break character and laugh alongside Carrey.

Violence: Moderately Heavy. The violence in the film is never graphic or heavy in nature; much of it feels cartoonish or video-game-like in nature. However, there is some content worth mentioning. Robots shoot at Tom and Sonic destroying a home. Dr. Robotnik tells a story about how he made a bully end up having t eat through a straw for the rest of his life. A bar fight occurs (moderately long). A spear goes through a car. A tank flips over. A bomb blows up and knocks out Sonic. A couple falls off a roof. Sonic is pursued by a flying robot controlled by Dr. Robotnik. Sonic’s caretaker, Longclaw, is shot in the wing with an arrow (we don’t see what happens to her). Sonic is shot with a tranquilizer . Dr. Robotnik is punched in the face (once).

Other: A character makes fart sounds with their armpits.

Alcohol: A bar fight takes place, well, at a bar where people are seen drinking beforehand.

Sonic’s feeling of loneliness in the film truly touched me, as a Christian and as a person. It’s not often, but there are times when things get tough, where it’s easy to let the Enemy trick me into thinking that I’m alone, that God doesn’t care anymore.

“Be strong and courageous. Do not be afraid or terrified because of them, for the LORD your God goes with you; he will never leave you or forsake you” —Deuteronomy 31: 6

And my favorite Scripture that I keep in the forefront of my mind:

“Who shall separate us from the love of Christ? Shall trouble or hardship or persecution or famine or nakedness or danger or sword? As it is written:

‘For your sake we face death all day long; we are considered as sheep to be slaughtered.’

No, in all these things we are more than conquerors through him who loved us. For I am convinced that neither death nor life, neither angels nor demons, neither the present nor the future, nor any powers, neither height nor depth, nor anything else in all creation, will be able to separate us from the love of God that is in Christ Jesus our Lord.” —Romans 8:35-39 NIV

I don’t remember walking out of a film and having as much fun with a children’s movie as I did last night after watching “Sonic.” Honestly, there is something for everyone to enjoy, adults included. I had a blast watching Ben Schwartz in his role of Sonic and Jim Carrey gives a stellar career-changing performance that reminded me so much of Carrey’s performances in “The Mask” and in “How the Grinch Stole Christmas.”

Be forewarned, Carrey’s humor can be a bit crass at times and may warrant some caution, so parents you may want to take this into consideration before taking children younger than 12 to this film. There is also some moderately heavy amounts of violence to contend with as well. However, there are some strong redemptive themes that surpass some of this. As always, discretion is advised.

Positive
Positive— Having been a huge fan of video games since my early childhood, Sega, Nintendo, etc., and having played several Sonic the Hedgehog games years ago, I can honestly say this movie was surprisingly good. Jim Carrey gave a superb, enjoyable, hilarious performance as Dr. Robotnik—typical classic Jim Carrey mannerisms—the voice and CGI of Sonic was superbly done.

Nothing very morally offensive about this movie, the movie showed the importance of Friendship and sticking together in times of Crisis, and how loneliness is bad for people, even the ending credits to this movie was a nice touch. People sometimes claim movies based on video games are usually horrible, for example the 1993 live action film “Super Mario Brothers” was really corny and lame, overall this movie is worth seeing at least once, and successfully creates the look and feel of the Sonic Franchise,
My Ratings: Moral rating: Average / Moviemaking quality: 3½

Jeff Andrew Winters, age 39 (USA)
Positive—…I actually saw this movie due to loving the shows as a kid and the game. I never expected this to make me remember why I loved Sonic in the first place. The movie moved very fast. It was action-packed and full of laughs for the whole—that’s right WHOLE—family. I highly recommend you do go support this movie please.
My Ratings: Moral rating: Good / Moviemaking quality: 5

Chris, age 30 (USA)
Positive—This was a much better movie then I expected. It was interesting and funny and always had you wondering what was going to happen next. The villain’s character by Jim Carrey was played perfectly. The movie was very entertaining and pretty clean.
My Ratings: Moral rating: Better than Average / Moviemaking quality: 5

Stephanie, age 45 (USA)
Negative
Negative—I tried to see the script before I went to this movie, but it turned out to be a script for another Sonic movie. I wanted to see if there was dialog that took the Lord’s name in vain. The script I looked at did not, but the movie does.

Now, as far as swear words go, I can typically handle those. But since taking the Lord’s name in vain is addressed in the ten commandments, I in particular do not want to support any scripted movie or TV show that takes my Lord’s name in vain. Unfortunately, I counted three times where God’s name is used in vain and one time where Jesus” name was used in vain. I was unhappy that I did not do a better job of investigating this movie and will do better in the future.
My Ratings: Moral rating: Extremely Offensive / Moviemaking quality: 5