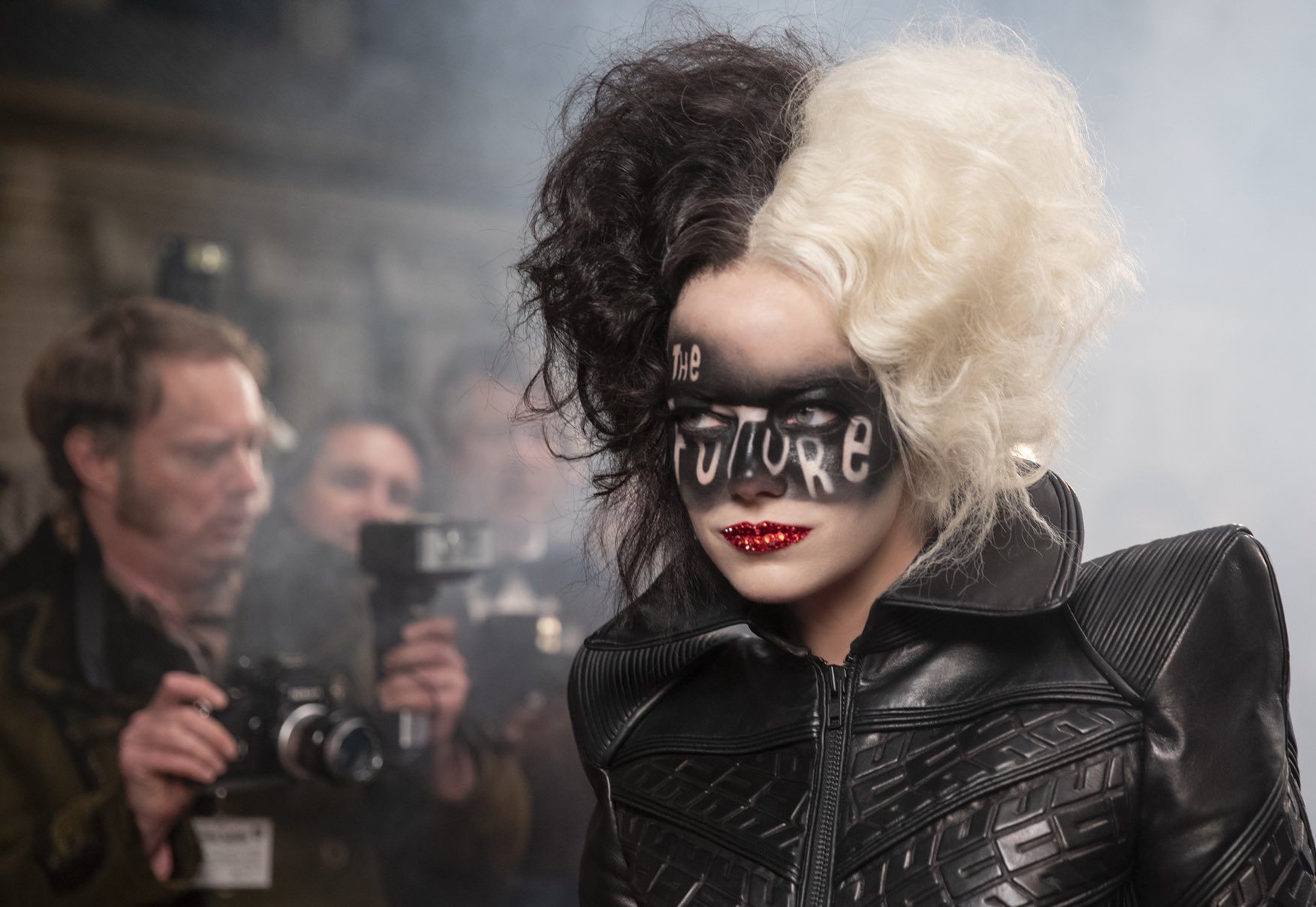 for some violence and thematic elements. 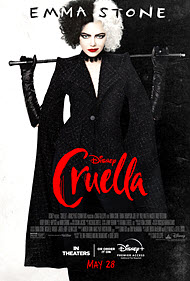 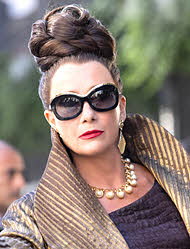 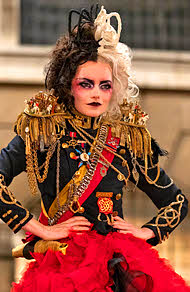 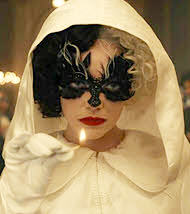 REVENGEFULNESS— Becoming devoted to hatred and getting revenge

Punk rock revolution of the 1970s 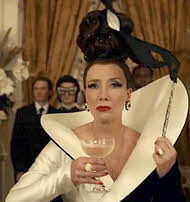 The world of the rich and famous

The cost of keeping up with the fast crowd 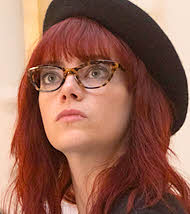 A teenager with a dream ambition to become a talented, innovative fashion designer

How to become cruel and evil

It’s difficult to turn a “would-be-puppy-murderer” into a likable protagonist, but in their trend of re-imagining their villains and giving them back stories, Disney has managed to do just that. Kind of.

Estella is not like other children. She’s a genius. Her vivid mane of black and white hair sets her apart. As does her attitude, an alternate ego she and her mother call “Cruella.” Estella wants to be nice, but Cruella wants to beat up other kids on the playground. One too many incidents in the principal’s office gets her expelled. Left without any money, her mother has no choice but to stop at a mansion on the cliff to “see a friend” she hopes can help them. “Stay in the car, Estella,” she says.

But this is impossible. The mansion is full of fashionable people, and Estella loves fashion more than anything. She and her small dog get out of the car just for a look, but then a tragic event befalls her mother. Estella winds up an orphan alone in London, where she makes friends with two other street-wise kids. Ten years later, the trio are some of the best thieves in London. Estella (Emma Stone —“La La Land”) comes up with fabulous costumes, Jasper (Joel Fry) urges her to pursue her dream of working in a fashion house, and Horace (Paul Walter Houser) is always looking for “an angle” to exploit. For her birthday, Jasper gets her a job at London’s most elite department store.

Though stuck scrubbing toilets and peeling gum off the tiles, Estella takes a risk and winds up working for The Baroness (Emma Thompson —“Sense and Sensibility,” “Nanny McPhee), a ruthless fashion designer with a diabolical secret. Once Estella finds out what it is, she just can’t hold back Cruella anymore. Estella may want to be nice, but Cruella wants to trounce her adversary in public, the one way she knows will leave the most lasting impression: through fashion, darling. I mean, what else is there but to make a statement?

In case you’re wondering, “Cruella” doesn’t “humanize” the infamous villain from the Disney animated film. There’s some doubt whether this version of the story is a prequel to the Glenn Close version of the 90s (Close also produced this film) or an “alternate reality” take on it, which I suspect is closer to the truth. She actually likes dogs and owns one, but isn’t terribly fond of the Baroness’ Dalmatians, and who can blame her? (Spoiler: the Dalmatians kill her mother by causing her to fall off a cliff.) The only mention of potential dog-slaying is when she turns up in a gorgeous spotted coat at one of her fashion shows, and the Baroness assumes she has killed her dogs (she hasn’t, but she does say “they would make a nice coat” and when her friend shows horror, dismisses it with a laugh and “I’m joking”). The rest of the time, Cruella is just diabolically smart and having a “good time” being outrageous.

I thought that the beginning of the film, and the lead-up to “Cruella” taking over the plot moved a bit slow, but the second half is more enjoyable. It’s a mix between a Harley Quinn-esque “origin story” (that is somewhat family-friendly) and “The Devil Wears Prada.” The story is somewhat predictable in its twists, but has gorgeous costume design. The soundtrack is full of 70s pop tunes, which lends a lot of fun flair to the project. And the acting is terrific. Emma Stone cannot quite cackle as high as Glenn Close did, but she brings a wonderful energy to Cruella that makes you both like her and a little bit… fear her. 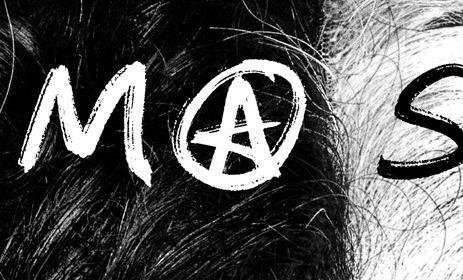 Note the circle-A anarchist symbol of the Anarchism movement displayed on some of Disney’s “Cruella” posters. You may have also seen this symbol used by some Antifa activists who are anarchists.

As far as parental concerns go, the PG-13 rating comes from thematic elements and some violence. Estella sees her mother flung off a cliff by three dogs and blames herself for her death for over a decade, then wants revenge once she finds out the truth. The Baroness tries to have her murdered by having her attacked, tied up, and left in a burning building. We learn through flashbacks that Cruella’s mother did not want her child, so she ordered the baby killed after it was born (a kindly person gave it to a housemaid instead). We assume another character has been murdered the same way (being thrown off a cliff) only to find out she deceived the police and framed someone for her “murder.” The Baroness is quite mean to her employees, not caring if she hits them when she throws chairs around and pricking Estella with a knife as she ruthlessly slashes the sleeves off a dress. Cruella drives a car recklessly down the street, smashing into other vehicles and scaring pedestrians. People are punched, kicked, and pushed. Men get hit in the eye with a cane and a champagne cork.

There’s several uses of the British expletive “bloody,” a few uses of “hell,” and people say “Oh, God,” a few times. Estella breaks into a man’s liquor cabinet and gets totally soused before she redesigns the store’s front window (and passes out). Other characters sip wine. A Dalmatian eats a necklace and the characters wait for it to come out “the other end.” (We see him squatting and then people waving around a metal detector. A character later gives someone the necklace and says it’s been bleached.)

Being thieves, Estella and her friends pick pockets on public transport systems, and she breaks them out of jail by crashing a dump truck into the police station. She goes out of her way to enact revenge on her enemy by destroying an entire fashion line and pulling outrageous pranks. Artie, one of her friends who works in a vintage store, is flamboyantly, stereotypically Gay and likes to cross-dress, though no one ever mentions this (he shows up in blouses and makeup, and sporting a David Bowie “Ziggy Stardust”-esque persona). Cruella eventually renames her house “Hell Hall,” and takes, of course, the last name of “De Vil.”

There’s also spiritual problems here. The movie’s message is that you grow up to be whoever you are “born to be.” Estella cannot fight her evil nature forever, so she might as well give in to it. By the end of the film, she has completely abandoned her desire to be “good,” because being bad is far more useful to her (and a lot more fun!).

It reminds me of the novel Dr. Jekyll and Mr. Hyde. The moral of that story is if you feed your evil nature even a little, it soon consumes your life. Jekyll thought he could separate himself into two persons, but indulging his sinful nature caused it to take over his life and erase the good inside him. Cruella is similar, a tale of a girl who gives in to her worse nature, but this is not presented in a negative light. The movie becomes way more enjoyable, entertaining, sarcastic, and “fun” once Cruella comes out to play, which could give children the wrong idea that being bad is more glamorous and admirable than trying to be good.

“The fear of the Lord is the beginning of wisdom, and the knowledge of the Holy One is insight.” —Proverbs 9:10 ESV

“But as for you, O man of God, flee these things. Pursue righteousness, godliness, faith, love, steadfastness, gentleness.” —1 Timothy 6:11 ESV

No one is perfect, and we all fight our worse nature on a daily basis. It’s what Jesus asks us to do, to learn to treat others as we would like to be treated, to forgive those who abuse us, and to resist our sinful urges in a desire to be more pleasing to the Lord. As fun as a villain origin story is (and this one is clever and funny), children need to know that Cruella’s desire for revenge, her ruthlessness, and how she treats other people aren’t to be admired or emulated.

Positive
Positive—Initially, I was not interested in seeing a photo play about the female villain from the animated classic “101 Dalmations.” I was disgusted when I found out that a homosexual character included in the Dramatis Personae on Wikipedia as another “Groundbreaking first” for Disney. However, the catchy theme song and impressive lead cast (Emma Stone and Emma Thompson) caused me to change my mind. The disgusting freak character and troubling moral message aside, the story is well written, and the acting is a ball of fun.

Biblically speaking, there is brief infant rear nudity at the beginning, thematic elements, bloodless violence, and the nauseating effeminate character I mentioned in the opening paragraph. Thankfully, nothing overtly sexual is shown (i.e., Two men kissing, holding hands, etcetera), but his inclusion is still disturbing. The moral message at the end is also troubling, but it is overall a good movie. Stay through the main credits for a scene after the title flashes on-screen. …
My Ratings: Moral rating: Offensive / Moviemaking quality: 5
D, age 35 (USA)
Negative
Negative—The whole movie I feel was not even started in her story the right way. After all, just at the very start, it shows who we thought was her real mother giving birth to her. Along with that later on, when her not real mother, and she stopped at the party to ask for help, I feel as tho the part when her fake mother dies because of the dogs, or so we thought, was just undeveloped.

I think there should be a better background story for this Cruella. Starting with the fact she could have lived in an orphaned and fell in love with making clothes, but she loved real fur clothes even in 101 Dalmatians (1961) she says “My only true love, darling. I live for furs. I worship furs! After all, is there a woman in all this wretched world who doesn’t?.”

Then later becomes obsessed with black and white which is how the dogs come into play which would have been a good handoff because when the pups that were taken by Cruella was much more than the ones that Perdita and Pongo had which was fifteen, for the two guys that help her in the real 101 Dalmatians she could have just paid them or could have known them from her orphaned.

On top of all that at the very end of the Cruella movie, she gave one dalmatian to Anita and Roger. Also, Roger at the very end was singing the song Cruella De Vil in Cruella which in “101 Dalmatians” was never sung by Roger until the very end of that movie. Even the time does not add up with the two.
My Ratings: Moral rating: Average / Moviemaking quality: 3
Samantha, age 18 (USA)