for strong fantasy violence throughout, language and crude/suggestive references. 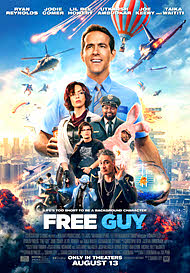 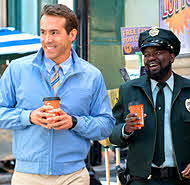 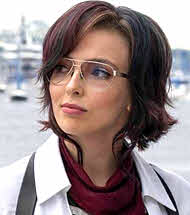 Living in an open-world video game

The world of video gaming and gamers

An idealist in a world that is very cynical and dark 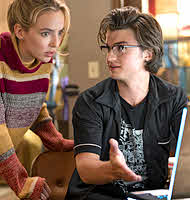 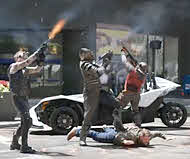 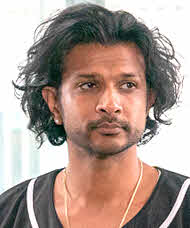 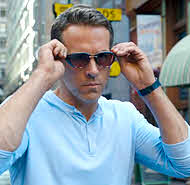 Guy lives in Free City. He has his routine down to a “T.” He wakes up, says good morning to his goldfish, grabs his shirt, watches the news, grabs his coffee and then he walks to work at his favorite place in the world… the bank.

Guy’s occupation as a banker has its dangers though, as everyday somebody comes in and yells, “Everybody get down on the ground! No one needs to be a hero! This will all be over soon.” So Guy gets down behind the counter, as usual, with his best friend, a security guard named Buddy.

Guy tells Buddy he wants more though. He’s tired of the same routine, over and over again. As these two buds walk out of the bank, that’s when Guy spots the love of his life walking down the street, Molotov Girl.

After a very brief interaction with Molotov Girl (let’s call her MG), she tells him that if Guy wants to spend any more time with her and help her with her mission, he must reach the same level she’s at (he’s a level 1 and she’s at 153).

Oh, wait! Did I forget to mention that Free City is actually a video game and Guy is an NPC (non-playable character), while MG is a player in the game (the person in the real world is a gamer named Millie)? Guy, however, is unaware of all of this, as are all the NPCs in Free City. Okay, now that you have that…

But there’s a bigger problem on the horizon, and it’ll take not just any Guy, but a “Good Guy” to fix this bug…

When the initial previews hit theaters a while back, I was actually really looking forward to “Free Guy.” After the disjointed, though well intentioned, film “Pixels” came out in 2015 (that paid homage to the retro video games), I was excited that we modern-day video gamers (yes I’m an avid video gamer when I’m not teaching music full time) were being given a film that would, yes poke fun at the video game world, but also celebrate the milestones that have been made.

“Free Guy” reminds me of the musical parody artist Weird Al Yankovic. Weird Al parodies famous songs, but when he does he does it both humor and respect (in many cases, the artists give him consent to use their music, even though he doesn’t need it, and are honored he asks). The film “Free Guy” both honors and pokes fun at the whole video game community. The rules, the terminology, the avatars, the gameplay, everything. It made me wonder at one point, “How did the video game community become the way it is?” “Free Guy” isn’t trying to reinvent anything or create anything new here, and I think that’s okay.

As other reviewers have mentioned, there are so many hidden “Easter Eggs” (surprises) in the movie that only true gamers are going to notice. However, there is still plenty for those who aren’t avid gamers. A fairly strong plot (apart from a few moments where the pacing is a bit slow). Additionally, there are some fine performances from many of the main characters (and some great cameos by some famous YouTubers and famous gamers).

My biggest critique of this film, though, is the dialog. Not simply because it is certainly off-color and suggestive at times, but also the conversations feel a bit awkward in some situations (particularly those involving the film’s main antagonist, the head of Soonami, Antoine (Taika Waititi).

Violence: “Free City” is a very violent city (actually, it’s a city with non-stop violence). There is a lot of violence occurring around Guy whenever he walks around the City, such as tanks running over cars, people beating each other, cars being smashed into, people thrown through a glass door, vehicles crashing, helicopter crashing—essentially chaos, mostly comedic in nature.

There are scenes to be aware of though. In one scene, Guy is run over by a train. He gets beat up in another scene. A person is shot in the chest, leaving a giant hole through him. A large action sequence occurs where heads are bashed. Guy is hit with a car. A man is held hostage. Buildings start to cave in on MG and Guy, as they are driving. A character is thrown against a pole. Lastly there is a large fight sequence.

Sexual Content/Dialog: Someone chooses a stripper cop as an avatar. Someone mentions “all rabbits do is b*ne and brawl.” We see characters give a “tea bagging” (it is a sexual gesture a player does to a victim they’ve killed in the game). Someone mentions Guy “found her button.” Someone does a sexual dance. A player states to his mom he has a special sock that land you in therapy for life. Someone says “hit the pixels hard.” The phrase “a*ss and b*ll cancer” is used. A homosexual reference is made. Characters share a couple kisses.

Nudity: There is a shirtless male when a player chooses a male stripper. There is a male NPC later in the movie who is also shirtless.

Drugs: Someone makes a reference to recreational drugs.

Alcohol: A scene takes place in a saloon.

Other: Someone mentions to Guy, “I’ve met God, he’s a d*ck” (try to tell Guy that Guy’s god is actually Antoine not God Almighty). Someone mentions they don’t want to see your mom’s basement. Someone starts a conversation about a homosexual male and murderer and someone in a wheelchair and a baby, but the conversation is cut off abruptly.

One of the biggest takeaways I think is to live to your fullest potential. For Christians, this means, at times, stepping out of your comfort zone, breaking the norm, and answering the call from God. It’s not always easy when God knocks on the door and asks you to move—to change. The change is always for His greater plan though.

“You did not choose me, but I chose you [the Apostles] and appointed you that you should go and bear fruit and that your fruit should abide, so that whatever you ask the Father in my name, he may give it to you.” —John 15:16

“And we know that for those who love God all things work together for good, for those who are called according to his purpose.” —Romans 8:28

As I said, it is not always easy or comfortable. I’ve had to make life-altering changes for God in my life, but such is the nature of serving God. He gives us strength when we call upon Him, so that we are able to make the changes and be able to continue to endure.

“Count it all joy, my brothers, when you meet trials of various kinds, for you know that the testing of your faith produces steadfastness. And let steadfastness have its full effect, that you may be perfect and complete, lacking in nothing.” —James 1:2-4

As I finish this review I reflect on how, in the decades that video games have existed, we’ve gone from simple games like Pong to Virtual Reality. It is amazing the gifts of creativity and ingenuity that God has provided humanity. In a sense, “Free Guy” celebrates this feat, while also pointing out that we can get lost in a fantasy world if we aren’t careful and lose track of reality. That’s a message that is not heard enough.

But underneath, I felt like I wanted to hit a reset button on some scenes, particularly those that contained questionable dialog (mostly from Guy) and the heavy amounts of violence (even if parts were, sure, comedic in nature). The very large amounts of sexual dialog, vulgarity and the like make this film not recommended for viewing by Christians.

While it is a nice homage to video games, like video games themselves, the content may be a bit too strong for some parents to approve. I saw young children at the screening I attended. Discretion is definitely advised.

Positive
Positive—Overall, I really enjoyed this movie for entertainment purposes and I believe that it dives even deeper than the superficial enjoyment of it. I believe it represents the struggle in society today between reality and so-called “virtual” reality. People desire the lack of responsibility and actual face-to-face interaction that virtual reality has to offer. Yet, many do not realize the real world consequences of such desires. They negate the importance of reality and will even lay it to the side if it means they can live in a fantasy.

I believe this movie appropriately shows how people should not lose site of reality and get caught up in their fantasy as their real world lives will collapse in the wake. I believe this should hit the heart of the Believer a bit more, as they are called to share the Gospel in the real world.See all »

However, when it comes to virtual reality or even video games in general, they can tend to let their mission to share the Gospel go and do and say whatever they desire. This comes from their naive hearts that think whatever they do in these realms does not affect reality.

Consequently, it does, as the representation of Christ is to be shown in every aspect of the Believer’s life. I do not want to come across as judgmental, as I have my own struggle with this, but I want to inform Believers of one of those backdoors that is used to trip us up in our following of Christ.

As this is to be a review of the movie, I would not recommend it for conservative Christian households or for young children, as there is quite a bit of language and a few moments with suggestive themes. It is full of comedy, romance, adventure, and action and provides a movie night of enjoyment for those, who are not negatively affected by the above influences.
My Ratings: Moral rating: Average / Moviemaking quality: 4½
Keith Race, age 21
Negative
Negative—Fantastic CG, Ryan Reynolds is good as always, but the movie was rife with foul language, and blasphemy of the highest order. Littered with PC like mentions of white supremacy, toxic masculinity, gender blah blah blah. Definitely aimed at teens and twenties, but my son-in-law who’s a hard-core gamer found it unappealing.
My Ratings: Moral rating: Extremely Offensive / Moviemaking quality: 4½
DHE, age old (USA)
Negative—2 profanities I miss in the overall good review. Which made me really dislike the movie.
1. About Jesus cleaning his tongue.
2. Guy asking Millie about God being a… but Millie answers no and refers to the villain (scene was in Millies hideout).
The 2nd profanity is for me enough for regretting watching this movie. It’s in a cleverly way done, to offense and get away with it.
My Ratings: Moral rating: Extremely Offensive / Moviemaking quality: 5
Jan, age 52 (Netherlands)