for brief sensuality and language. 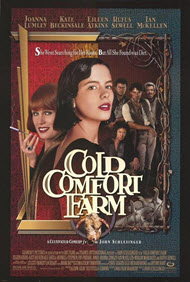 “She went searching for her roots. But all she found was dirt.”

“Cold Comfort Farm” is a quirky English romantic comedy, set in the 1920s, about a twentyish woman (Kate Beckinsale) whose parents have both died and therefore needs to be provided for. Naturally, it should be the duty of a relative and she decides to choose from those who write letters of condolence. She chooses the most curious respondent, a distant relative at a forsaken, rundown farm of the title name. She reasons this will give her suitable background to become a Jane Austen-like writer, which ambition has left her resolved never to marry.

The audience is forewarned that, she “can’t abide messes,” so she takes to setting the place right. In doing so, she interacts in a positive way with the odd assortment of inhabitants of the farm.

The movie seems to value the doing of good works and considers marriage to be the proper beginning point for permanent emotional commitment.

Objectionable are the shallow morals of the back country poor folk, including one scene where an illicit liaison is discovered on entering a barn. Nothing graphic here, although there is fleeting nudity when a particularly unkept farm girl is reluctantly bathed for a special occasion.

Don’t expect answers to all the questions the movie raises. It’s essentially whimsical.

Positive—I had read “Cold Comfort Farm” many times and was delighted to find it on film. While this couldn’t be considered a “Christian” film, I don’t feel that its aim is to detract from Christianity. The only real thing that I find offensive is that Flora chooses to teach the hired girl “the precautionary arts” instead of abstinence. I adore British humor, and this movie is full of it at its best. Flora heads out to Cold Comfort hoping to find “one or two family messes [she] can clear up.” She gets to know the members of the family, all of whom are unhappy, and helps them to find the thing that will make them happy. Then she goes off and gets married and lives, one can only suppose, happily ever after. My Ratings: [Better than Average / 5]

Amber, age 22
Negative—This movie is a slap in the face to Christianity. The basic idea is Humanism vs. Christianity and other “Superstitions”. The heroin goes around pulling each of the farms occupants out of their backwards and dirty lives. Both Christianity and family cohesiveness are openly mocked. The heroine first rids the farm of its Christian patriarch by tricking him into leaving on an evangelistic mission. She then introduces specific family members to what they need to live a happy life: condoms, parties, make-up, movies, travel, etc. Her humanistic views are called a “higher common sense.” If you think this is a family/Christian friendly movie, the film makers are having a great laugh on you. My Ratings: [1½/3½]