for violence, language, and a strong scene of sexuality. 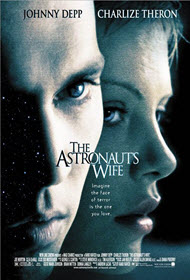 NASA sends astronauts Spencer Armacost (Johnny Depp, “Donnie Brasco”) and Alex Streck (Nick Cassavetes, “Face/Off”) on a routine space walk. Their mission: to repair a satellite and deploy it. Meanwhile, Spencer’s wife, Jillian Armacost (Charlize Theron, “Mighty Joe Young”), hears a news report that there has been an explosion aboard the space shuttle. NASA agent Sherman Reese (Joe Morton, “Blues Brothers 2000”) rushes her to a NASA briefing room, where Natalie Streck (Donna Murphy, “Star Trek: Insurrection”), Alex’s wife, is waiting. The doctor (Samantha Eggar, “The Phantom”) informs them of the condition of their spouses; Spencer is fine, but Alex…

In a bizarre twist of events, Alex, who seems to be recovering quite well, unexpectedly dies and his wife commits suicide (by electrocution). Spencer quits NASA and moves to New York to work for an aerospace firm. And Jillian, who is pregnant with twins, becomes suspicious of her husband’s sudden behavioral changes.

If my review sounds boring, it is because there is nothing good to share with you. The plot is absurd. The movie is boring and the acting is deplorable! Younger teens may like this type of movie, but it is definitely not suitable for them to see. Besides the prolific use of vulgarity, there are scenes that virtually show them in the act of sex (without actually seeing them nude). The talk is extremely crude and often gross. For instance, in one scene we find the two of them in bed. Spencer turns to Jillian and says, “Do you like fruit?” He then lifts up the covers (just high enough for her to see) and makes a gesture as if he had grabbed himself and says, “Isn’t this a peach?” To which she replies, “Oh, is that for me?” You can figure out what happens next. It is pure filth and disgustingly crude. It is childish in nature and very immature!

This is Randy Ravich’s directorial debut and I hope it is his last! Every scene that had potential is robbed by his heavy-handed approach. When Jillian contemplates terminating her pregnancy, he could have made it a monumental experience, but he blows it. Don’t get me wrong, it was perhaps the best scene in the movie; but his crude directing blew the potential he had for stirring up the emotion of the moment.

“The Astronaut’s Wife” is a movie that is poorly written, loosely thrown together and has an unbelievable ending that leaves you disturbed, confused and empty. Don’t waste your money on this loser!