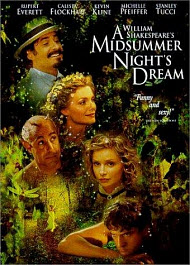 “Love looks not with the eyes, but with the mind; and therefore is winged Cupid painted blind.”

The works of the Bard, William Shakespeare, are getting plenty of attention in recent years due to several film releases: “Hamlet,” “Much Ado About Nothing”, “Romeo and Juliet,” “10 Things I Hate About You” and now, “A Midsummer Night’s Dream”. And that doesn’t even mention several other Shakespeare-based releases. This rendition stars such talented actors and actresses as Michelle Pfeiffer, Kevin Kline, Calista Flockhart, and Christian Bale.

Titania (Michelle Pfeiffer), the Fairy Queen, has an argument with her husband. To teach her a lesson, he sends his mischievous servant Puck (Stanley Tucci) to put a love potion on her eyes so she’ll fall in love with the first thing she sees. Puck also turns a weaver Bottom (Kevin Kline) into a donkey-headed monster for Titania to fall for. The potion is also used on four human lovers who appear confused about who loves whom. “A Midsummer Nights Dream” is full of funny moments and a picturesquely stunning visual setting. The great thing about this movie is that those who never liked Shakespeare (myself included), will surely enjoy it. The Shakespearean language is done in a way that makes it understandable. Not only that, but it is certainly refreshing to sit through a film uncoarsed by verbal vulgarity.

There is no violence in the film, which was also refreshing to see. The major objection is nudity and sexual content. Sexual intercourse is implied a few times, and there is one sexual scene with Titania and Bottom. There is also a little bit of nudity, but not too graphic. I wouldn’t recommend this to very young viewers, but I would recommend it to teens and young adults. In an age where violence, gore, homosexuality, and other anti-Christian themes are flooding movie theaters, “A Midsummer Night’s Dream” is a nice change of pace.

Positive
I agree with the review. I’m a high school English teacher, and I found this film version of Shakespeare’s most famous fantasy charming. The dialogue, even with Shakespeare’s puns and verbal challenges, was made easily understood by the superb acting. Puck, that mischievous little fairy, was delightful. You must pay special attention to the ending, for the “play within the play.” Kline’s troop of actors is splendidly funny. My friend, who despises everything Shakespeare, found herself laughing to tears. Well done, even with the slight sexual overtones and nudity. Not for little kids, but adults and mature teens will enjoy!

Karen Gibson, age 42
I agree with the reviewer about the generally fun and uplifting feeling conveyed throughout the movie. It was not coarse or vulgar in any spot that I can recall. I would certainly be comfortable with my teenage children seeing this movie. One point to consider is that the Shakesperean language requires a fairly high degree of concentration from the viewer. It is easy to miss the humor if not listening carefully and even with concentration, it is a bit hard to keep the four young lovers clearly identified.

David, age 46
Negative
Negative—Although “A Midsummer Night’s Dream” (1999) movie has great costumes, acting, actors, and, of course, the Bard’s well written play and dialogue, it had nudity and sexual scenes from beginning to end. I did watch it based on the reviews already here, stating that it had a very “little nudity” and that none of the nudity was “offensive.” However, sex scenes were implied through the film, with completely naked couples, showing most of their nakedness in the scenes for sustained periods of time, including breasts and backsides.

Mrs. F, age 26 (USA)
Comments from young people
I went to this movie with my aunt, and even though I like action and suspense movies more than anything else, I found this film surprisingly enjoyable. The scene where they put on the play was hilarious (as in the tradiotion of Monty Python). Though I found some parts boring, it was alright.