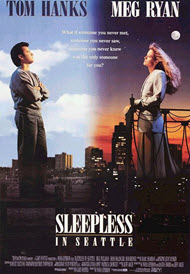 “Sleepless In Seattle” (Starring: Tom Hanks, Meg Ryan, Ross Malinger, Rosie O'Donnell, and Bill Pullman and Directed by Nora Ephron) allows the romantic to believe that love still heals the broken-heart, creates hope and fulfills dreams in an age of disillusionment and despair. “Sleepless In Seattle” embellishes this fundamental truth. It is a subtle reminder that no matter how desperate our situation may be and regardless how painful it becomes to us, love conquers all.

Having lost his wife to cancer, Sam Baldwin (Tom Hanks) moves from Chicago to Seattle in an attempt to escape the memories and start a new life. His 8-year old son, Jonah (Ross Malinger, “Toothless”) a restless and independent-minded child, phones a radio talk-show psychologist and asks for help. He explains in vivid detail the pain that his father endures; and when asked by the host to put his father on the phone, he compellingly does so. Sam awkwardly and somewhat reluctantly pours out his heart to the radio listeners. As he talks about his wife and the love they shared together, Annie Reed (Meg Ryan), a Baltimore journalist who happens to be engaged to Walter (Bill Pullman, “Independence Day”), listens and becomes enchanted by what she hears. She, along with thousands of other women, contact the station asking for Sam’s phone number. Many write letters expressing their admiration of him and some even proposing. Annie, enamored by this man, hires a detective to find out more about him. Eventually, she flies to Seattle in a feeble attempt to find him.

Meanwhile, Jonah reads Annie’s letter and becomes convinced that she is the one who can fill the void in his father’s life. He tries to find her, Sam tries to find Jonah and Annie tries to find Sam. And of course, in the end, they all find each other.

This delightful, romantic comedy has no hidden surprises. You know precisely what is going to happen. But who cares? Rent the video and buy a box of Kleenex, the women in the house will no doubt shed tears over this one. It is a good family film. It is rated PG because mild vulgarity and one profanity is expressed in the movie.