Hebrew: רִבְקָה —transliteration: Ribqah —meaning: captivating; a rope with a noose used for firmly tying something; a rope for tying animals

also known as: Rebecca—the spelling used in the New Testament 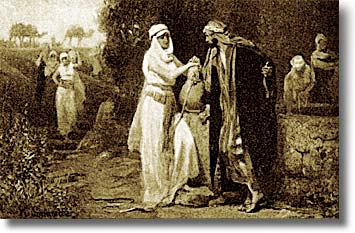 Rebekah is the wife of Isaac (son of Abraham) (Genesis 22:23; 24:67) and the mother of the twins Esau and Jacob. She was the daughter of Bethuel.

Rebekah's father was Abraham's nephew, Bethuel, son of Nahor. Therefore, she was the granddaughter of Abraham’s brother. She originally lived in Mesopotamia. Abraham wanted his son Isaac to have a wife from Abraham’s homeland, not from their new home among the Canaanites.

Although her husband Isaac did not specifically chose her for his wife, he did accept her and love her (Genesis 24:67). Like her mother-in-law (Sarah), Rebekah remained childless for many years (Genesis 25:19-28).

However, Rebekah eventually became the mother of two major peoples: the Israelites, through her son Jacob, and the Edomites (Idumaean), through Esau. Today’s Palestinians are likely the descendants of the Edomites, Philistines and Amalekites.

Rebekah was apparently beautiful, for when Isaac later moved his family to the Philistine city of Gerar (to escape a famine), he was fearful that her beauty would tempt the Philistines to kill him to take his wife. For safety, he pretended that she was his sister. Rebekah went along with the deception (Genesis 26:1-11).

Earlier, Isaac's father and mother had used the same ploy for the same reason (see Genesis 20:1-18.) 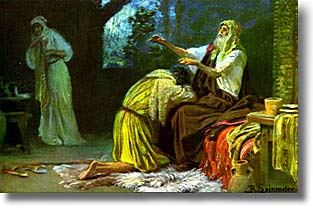 Many years later, Rebekah encouraged the deception of her elderly husband Isaac to obtain his official blessing on Jacob, the second born of her twins. The lie was successful, but resulted in Jacob fleeing to Mesopotamia to survive the wrath of his more powerful brother Esau. She never saw Jacob again.

“The circumstances under which Abraham’s ‘steward’ found her at the ‘city of Nahor’, in Padan-aram, are narrated in Genesis 24-27.

‘She can hardly be regarded as an amiable woman. When we first see her she is ready to leave her father's house forever at an hour’s notice; and her future life showed not only a full share of her brother Laban's duplicity, but the grave fault of partiality in her relations to her children, and a strong will, which soon controlled the gentler nature of her husband.’

The time and circumstances of her death are not recorded, but it is said that she was buried in the cave of Machpelah (Genesis 49:31)” (Matthew G. Easton, Bible Dictionary).