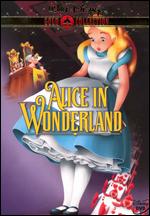 Of more than a dozen film renditions of Lewis Carroll’s “Alice’s Adventures in Wonderland” and/or “Through the Looking-Glass,” this Disney version is probably the best known.

The scene at the Mad Hatter’s (Ed Wynn) tea party has to be one of the greatest examples on film of sheer nonsense comedy. Also worthy of mention are the Cheshire Cat (Sterling Holloway) sequences.

More disturbing are the deaths of humanized characters: the cute baby oysters that are eaten by the walrus (this sequence is sometimes cut from broadcast TV versions), and the domineering Queen of Hearts responding “off with their heads” to every minor annoyance. According to many sources, the original Carroll books were political commentary, written as fantasy to ensure that he didn’t lose HIS head.

There’s no occult/witchcraft content. But the caterpillar with the water pipe, the mushroom and other eats/drinks that make you grow bigger or smaller—some of these elements were later seen as symbolic of hallucinogenic drug use. Witness the Great Society/Jefferson Airplane drug song “White Rabbit,” whose lyrics in turn gave birth to the title of the 1973 drug film “Go Ask Alice”.

In the end, we see that Alice’s adventure was just a bad dream. The minimum appropriate age for children to watch this film would be when they can clearly tell fantasy from reality and won’t suffer from bad dreams themselves.

Comments from young people
Disney’s Alice in Wonderland is based on Lewis Carol’s (Rev. Charles Dodgsen) books Alice’s Adventures in Wonderland and Through the Looking Glass. Both of the books are worth reading. The songs, imagination, it is all fun! (One poem: “You are old, Father William,” the young man said, “and your hair has become very white, and yet you incessantly stand on your head, do you think at your age it is right?” “In my youth,” father William replied to his son, “I feared it might injure my brain. But now that I’m perfectly sure I have none, I do it again and again!”

Interestingly, the poems included in Lewis Carrol’s books are parodies of popular recitations of the time period, and almost all of his characters (and some events) symbolize some idea or event. Look for a site by a student named Lenny on Alice and Wonderland, it goes into great detail about the symbolism, story behind the books, etc.

The movie is great and if it gets people to read the books, even better. (they are the third most-quoted books, after the Bible and Shakespeare) If you have never seen the movie, you should! No, the animation isn’t like it is these days, but it was made in the 50’s, and the cream of the crop, so to speak, of its time.
My Ratings: [Excellent / 4]