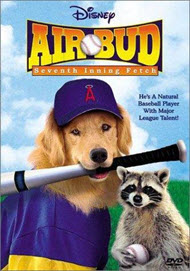 Buddy, the world’s most amazing sports dog, is back in his fourth feature. Other than picking a new sport, the writers’ only innovation in this segment was sending Josh Framm (Kevin Zegers) off to college and giving little sister Andrea (Caitlin Wachs) a well-deserved turn at the central role.

Andrea feels shut out at home; Josh is gone, and her parents are busy with a new baby. She tries out for baseball, but isn’t very good and makes the team only with a little help. Buddy, on the other hand, can play baseball as well as any other sport, and he becomes a star.

The film explores, in a low-key way, themes like family relationships, friendship and honesty. Andrea’s relationship with Tammy (Chantal Strand) takes some twists but comes out OK. Meanwhile, the requisite stupid villains and a trained decoy raccoon are stealing all of Buddy’s now-grown-up pups in an effort to clone sports animals. Expect the usual G-rated cliffhganger ending.

Content Warnings: None. The film is silly, therefore not scary. Although some of the acting is convincing, the villain sections are deliberately unrealistic. There’s no problem with letting children of any age watch this.

Comments from young people
Positive—This movie was great for little kids! There was nothing at all in it except a kid going to college and a sister who misses him. I enjoyed very much!
My Ratings: [Good / 5]